Yu Gwansun's childhood home in Yongduri, burned down in 1919, reconstructed in 1991

Yu joined the March 1st Movement for Korea's independence from Japan while still a high school student. Along with others from the movement, she participated in peaceful rallies in Seoul on March 1 and 5, 1919, and then helped to organize a rally in her hometown a few weeks later. Arrested by the Japanese military police for her actions, she received a three-year prison sentence. Tortured by the prison guards because of her continued activism, she died of her injuries in September 1920 at age 17. Knowing the power of her example, the Japanese buried her inconspicuously.

Yu's efforts for independence and justice would presage the later nonviolent work of Mohandas K. Gandhi and the Rev. Dr. Martin Luther King, Jr. Even though Yu only worked in the independence movement for 21 months, her name remains a source of strength and pride to Koreans even today, and has taken a place among the most beloved Korean patriots in Korean history.

The second daughter among five children in the family of Yu Jungkwon and Lee Soje, Yu Gwansun spent her childhood in Jiryeongri, Edongmyeon, Mokcheongun in Chungnam province in Korea. Nearby was the Maebong Presbyterian Church that she attended. Recognizing the young girl as a talented student, American missionary Alice J. Hammond Sharp encouraged her to attend the Hakdang Mission School for Girls in Seoul, about 90 kilometers away from Cheonan. Yu entered the Ewha School in 1915, beginning in the middle school program. In 1918, she graduated from middle school, and began high school studies. 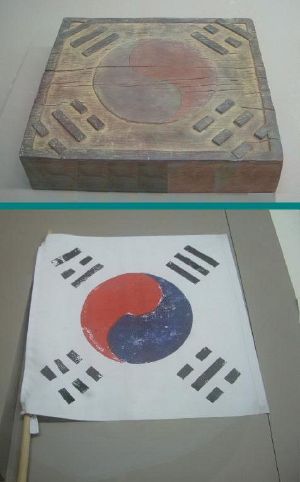 In 1919, Yu Gwansun and other Ewha Hakdang high school students including Guk Hyeonsuk, Kim Hija, Kim Boksun and Seo Myeonghak participated in the initial activities of the March 1st Movement's independence rallies held in Pagoda Park and other areas in Seoul. A few days later, on March 5, she also participated in another rally for independence held at Namdaemun Station. On March 10, the Japanese occupation government ordered all middle and high schools temporarily closed. On March 13, Yu left Seoul and traveled back home to spread independence fever in Korea's southwest region.

Arriving home, Yu told her family about the independence rally that had been held in Seoul and in various places throughout the country, and encouraged them to work for independence in Cheonan, too. Along with her father, Yu Jungkwon and his younger brother, Yu Jungmu, she helped organize a rally to be held in the Aunae Marketplace in Byeongcheonmyeon on April 1, 1919. On March 31, the night before the rally, she lit a beacon fire on top of Mount Maebong, to gather people from all around the region to join in the rally.

About three thousand people participated in the Aunae Marketplace Rally. Cho Inwon read a declaration of independence, and Yu Gwansun led the crowd in cheering for independence (독립만세). Japanese military police opened fire on the crowd, killing 19 and wounding many, 30 of them seriously. Among those killed were Yu's father and mother.

Yu complained to the authorities that it was unreasonable for the military police not to allow the people to demonstrate, which led to her arrest and detainment by the Cheonan Japanese military police unit. In retaliation for her rebellious actions, the Japanese burned her family's home to the ground. Her uncle, Yu Jungmu, went to the police headquarters to complain, carrying the body of his dead brother in protest. He served three years in prison for his actions.

Tried and convicted in district court in Gongju, Yu began serving her sentence in Gongju Prison. Later, on August 1, after an appellate court in Seoul reduced her sentence to three years, she was reassigned to Seodaemun Prison in Seoul. While in prison, she led a demonstration of prisoners on the first anniversary of the March 1st Movement. Because of her continued activism even while in prison, the prison authorities tortured her, and she died on September 28, 1920, at the age of 17, of injuries sustained during the torture. Two days later, she received an unceremonious burial in a public cemetery in Itaewon, Seoul. Her body disappeared when the cemetery was destroyed during the occupation.

Seventy years after her death, a spot was chosen on the slopes of Mount Maebong, where she had burned the beacon light the night before the Aunae rally, to erect the Chohonmyo Memorial Tomb. With the tomb's dedication on October 12, 1989, Yu's spirit finally had a peaceful resting place. Memorial services are held at Chohonmyo each year on September 28, the anniversary of her death. In 2003, a memorial hall and museum was added to the memorial complex. 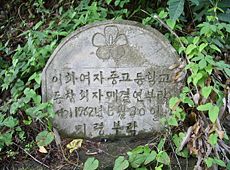 On March 1, 1962, the Korean government awarded Yu the Order of Merit for National Foundation. On May 30, 1962, the Ewha Girls Middle and High School Alumni Association made the village of her birth, Yongduri, an official sister city of the school in Seoul. In 1996, Ewha Girls High School awarded her an honorary high school diploma. Yu's parents, Yu Jungkwon and Lee Soje, killed in the Aunae marketplace demonstration, received a presidential medal in 1963 and the Meritorious Patriot's Award in 1991. In 1977, the government deeded the property and home adjoining Yu Gwansun's childhood home to the surviving members of her family as compensation for their house being destroyed, and in 1991, her birthplace was also reconstructed on the site where it had been burned down in 1919.

This article began as an original work prepared for New World Encyclopedia by Dan Davies and is provided to the public according to the terms of the New World Encyclopedia:Creative Commons CC-by-sa 3.0 License (CC-by-sa), which may be used and disseminated with proper attribution. Any changes made to the original text since then create a derivative work which is also CC-by-sa licensed. To cite this article click here for a list of acceptable citing formats.

Note: Some restrictions may apply to use of individual images which are separately licensed.
Retrieved from https://www.newworldencyclopedia.org/p/index.php?title=Yu_Gwansun&oldid=1089766
Categories:
This page was last edited on 28 November 2022, at 14:11.
Content is available under Creative Commons Attribution/Share-Alike License; additional terms may apply. See Terms of Use for details.