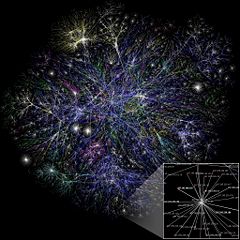 Visualization of the various routes through a portion of the Internet

Web conferencing, or online conferencing, is a method of using the Internet to conduct live meetings, trainings, or presentations among two or more users in two or more locations. Participants in web conferences receive the content and interact with presenters and/or other attendees while sitting in front of their computers and being connected via the Internet. In its broadest sense, the term Web conferencing includes the broadcasting of audio or video content to recipients with little or no audience interaction (Webcasts); to presenting of a lecture or workshop that may include partial or full interaction between the audience and presenters (Webinars); to live meetings that are fully interactive (Web meetings).

Web conferences involve real-time audio and/or video sessions. In the early years of the Internet, the term "web conferencing" often was used to describe a group discussion in a message board and therefore not live. The term has evolved to refer specifically to live or "synchronous" meetings. However, there may be an option of having some or all presentations recorded, such that some participants can choose to view them at a time more convenient for them (on demand). The sessions may be conducted via a web-based connection, which requires attendees to simply enter a web site address (URL) to enter the conference, or the connection may be via a downloaded application on each of the attendee’s computers.

The development of the technology of web conferencing offers people the ability to conduct real-time meetings across national borders and geographical distances. This, in effect, helps to bring the people of the world closer together, allowing them to address issues of common concern. Furthermore, in cases of natural disasters, human rights abuses, environmental disturbances, and other pressing issues, this technology allows human beings in different parts of the world to more quickly find common means to address such problems.

Web conferences range from simply two individuals communicating from their home offices, to meetings among board members and/or staff of multi-million dollar corporations, to large association conferences with thousands of attendees. Among features commonly utilized in the meetings are slide show presentations, live or streaming video, real-time audio communications, public or private text among participants connected to the meeting, vender exhibitions, networking events, polls and surveys, and poster sessions. Screen sharing may allow participants to see anything the presenter currently has showing on his or her screen.

By connecting people online, web conferencing allows economical meetings among people located at different places without the cost and time involved in physical meetings where everyone gathers in one place. File sharing, collaborative web browsing, and application sharing are also easily supported over the Internet. As a result of the efficiency of this method, there is an increased reliance on web conferencing in place of the traditional face-to-face meetings.

Types of web conferences and terminology

There are three different types of Web conferencing: Webcast, Webinar, and Web meeting. However, there is considerable overlap among these terms.

A webcast is an online “broadcast” whereby audio or video content from a single source is transmitted over the Internet to many listeners/viewers using streaming media technology. The media file may be distributed live or on demand. The term webcasting is usually reserved for referring to non-interactive linear streams or events. Hundreds of listeners/viewers may view the Webcast simultaneously, but there is limited or no interaction among this audience.

A webcast is the “Internet counterpart to traditional radio and TV broadcasting” (PCMag 2010a) and the largest "webcasters" include existing radio and TV stations who "simulcast" their output, as well as a multitude of Internet only "stations." Virtually all the major broadcasters have a webcast of their output, from the BBC to CNN to Al Jazeera to UNTV in television to Radio China, Vatican Radio, United Nations Radio, and the World Service in radio.

Today, webcasts are being used more frequently and by novice users. Live webcasts are allowing viewing of presentations, business meetings, seminars, and so forth for those that telecommute rather than attend. Such sites offer live broadcasting as an affordable solution to public speaking events that expands the viewing audience to anyone that has an internet connection.

Live sporting events, both local and national, have also quickly become frequent webcast subjects. With regard to smaller events such as Little League, amateur sports, small college sports, and high school sports, webcasting allows these events to have full audio or video coverage online when they may not be able to book standard radio or TV time. Websites like Meridix Webcast Network, Texas Sports Radio Network, and others allow local schools, teams, and broadcasters to produce their own webcasts, which also have the advantage of being accessible to anyone with an Internet connection (i.e. relatives several states away), unlike the range and market limitations of terrestrial radio and TV.

A webinar is a particular type of web conference, involving a lecture or workshop presented via the Internet. Webinars typically are one-way events from the speaker to the audience, with limited audience interaction (such as in a webcast). However, the term also includes those seminar events that have partial to full interaction between the audience and presenters, including question and answer sessions.

In some cases, the presenter may speak over a standard telephone line, while pointing out information being presented onscreen, and the audience can respond over their own telephones, speaker phones allowing the greatest comfort and convenience. There are web conferencing technologies on the market that have incorporated the use of VoIP audio technology, to allow for a completely web-based communication. Depending upon the provider, webinars may provide hidden or anonymous participant functionality, making participants unaware of other participants in the same meeting.

The term webinar, combining Web and seminar, is a neologism—a newly coined word that may be in the process of entering common use, but has not yet been accepted into mainstream language. The term "webinar" was registered in 1998 by Eric R. Korb (Serial Number 75478683, USPTO) but was difficult to defend; it is currently assigned to InterCall.

A web meeting is a particular type of web conference in which there is high interaction possibilities among the participants. In a meeting, two or more people come together for the purpose of discussing a (usually predetermined) topic, often in a formal setting. In a web conference, such gatherings are conducted with each participant sitting in front of his or her own computer and being connected to the other participants via the Internet. This category includes board and staff meetings conducted over the Internet and large conferences with participants and presenters interacting. Companies with distant branch or home offices find this method conducive for discussing without traveling to a common location, with the participants able to converse and share documents in real time.

A web conference that utilizes video may be considered a particular type of videoconference—one in which the content is carried over the Internet. Videoconferencing is a term that refers to a video session in real-time among two or more users in two or more locations. Early versions, before the popularity of the Internet, utilized satellite communications and traditional analog TVs. Inhouse systems became popular in the early 1980s. Videoconferencing allows communication among several end-points, while the terms “video chat” and “videophone” commonly refer to one-on-one communications (PCMag 2010b).

Hybrid models are events that are done face-to-face in a particular location but part or all of the content also carried via Web conferencing.

Other typical features of a web conference include (Frost and Sullivan 2006):

Web conferencing is often sold as a service, hosted on a web server controlled by the vendor. Offerings vary per vendor but most hosted services provide a cost per user per minute model, a monthly flat fee model and a seat model. Some vendors also provide a server side solution which allows the customer to host their own web conferencing service on their own servers.

Note: Some restrictions may apply to use of individual images which are separately licensed.
Retrieved from https://www.newworldencyclopedia.org/p/index.php?title=Web_conferencing&oldid=972313
Categories:
This page was last edited on 10 August 2013, at 15:51.
Content is available under Creative Commons Attribution/Share-Alike License; additional terms may apply. See Terms of Use for details.