This is a Chinese name; the family name is 王 (Wang). 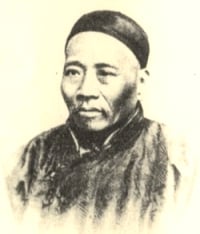 Wang Tao (Chinese:王韜 Pinyin: Wángtāo; November 10, 1828 – April, 1897) was a Qing dynasty translator, reformer, political columnist, newspaper publisher, and fiction writer. He was born as Wang Libin in Puli Town (甫里)[1]in Suzhou (蘇州) prefecture. After failing the civil service examination in 1848, where he was offered a job at the London Missionary Society Press, helping Walter Henry Medhurst, William Muirhead, Joseph Edkins, and William Charles Milne translate the New Testament and a number of Western science texts into Chinese. In 1862, Wang was threatened with arrest for writing a letter to the Taiping rebels, and took refuge in the British Consulate, from where he was evacuated to Hong Kong. There he assisted James Legge his Chinese Classics translation series. In 1867, he followed Legge to Britain to continue with the translation work. On the way, he traveled around France and England and took notes for his travel books.

In 1870, he returned to Hong Kong and founded the Zhong Hua General Printing House and the Tsun-wan yat-po (1874-1947) Universal Circulating Herald), the first Chinese daily newspaper in history. In 1884, the Qing government, impressed by his work, pardoned him. He returned with his family to Shanghai, founded Tao Garden Publishing House and became the head of Gezhi College, where he promoted Western style education. Wang's travel writings include his diary Jottings of Carefree Travel, A History of France, The Franco-Prussian War and Travels in Japan. Besides scholarly work, he also wrote a large number of classical poems, essays, letters, an autobiography and a collection of stories.

Wang Tao was born November 10, 1828, as Wang Libin in Puli Town (甫里) in Suzhou (蘇州) prefecture, Jiangsu province. After failing the civil service examination in 1848, he went to Shanghai to visit his father. During his stay in Shanghai, Wang Tao visited the London Missionary Society Press. He was warmly greeted by Walter Henry Medhurst and his daughters Mary and Ellen.[2] Wang Tao also met missionaries William Muirhead, Joseph Edkins, and William Charles Milne, all well-versed in spoken and written Chinese language.

Work with the London Missionary Society

In 1849 Wang Tao's father died, and Wang Tao was looking for a way to support his family. He was offered a job by Walter Henry Medhurst at the London Missionary Society Press in Shanghai, assisting in his translation of the New Testament into Chinese. Wang Tao worked at the London Missionary Society Press for the next 13 years. During this period, he also translated many English books into Chinese, in collaboration with missionaries Alexander Wylie and Joseph Edkins. These included Pictorial Optics, An Elementary Introduction to Mechanics, Concise History of Sino-British Trade, and A History of Astronomy of the Western Countries.

The middle of the nineteenth century was a period of turmoil in China. In 1860, the Taiping Rebellion had captured Suzhou, Changzhou, and was threatening Shanghai. During this period, Wang Tao was in contact with the leaders of the Taiping Kingdom. In 1862, he even wrote a letter, under the pseudonym Wang Wan, to a Taiping leader, proposing tactics against the Qing military and suggesting that Westerners were not the enemy of Taiping. He stated that the real enemy was the Qing government; if the Taiping army could achieve victory over the Qing army led by Zeng Guofan (曾國藩), then the Westerners might side with the Taiping Kingdom. When the Qing army captured Shanghai, this letter fell into the hands of the Qing government, and Emperor Tongzhi (同治帝) ordered the arrest of Wang Tao. Medhurst’s son, the British Consul, gave him refuge in the British Consulate, where he remained for more than four months. In October, 1862, a disguised Wang Tao, escorted by several people from the British Consulate, boarded an Ewo (怡和 )[3] ship for Hong Kong. This is how he left the homeland to which he was not to return for 22 years. In Hong Kong, he changed his name from Wang Libin to Wang Tao.

In Hong Kong, James Legge, the principal of the Anglo-Chinese College invited Wang Tao to assist in the translation of The Thirteen Chinese Classics. By 1865, Legge and Wang had completed the translation of Shang Shu and The Bamboo Book Annals. 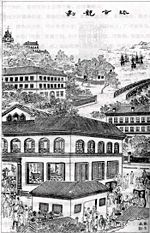 In 1867, James Legge returned to his native Scotland, settling in the small town of Dollar in Clackmannanshire. He wrote a letter to Wang Tao, inviting him to come to Scotland to continue assisting in the translation of more Chinese classics. Wang Tao boarded a ship and departed from Hong Kong, stopping over in Singapore, Ceylon, Penang, Aden, Messina, and Cairo before reaching Marseille.[4] The voyage from Hong Kong to Marseille took more than 40 days. Wang Tao took the opportunity of sightseeing in all the ports of call. From Marseille, he took a train to Lyon, then to Paris. He visited the Louvre, and also visited the sinologist Stanislas Julien at the Sorbonne. After a short stay of a little under two weeks, Wang Tao crossed the English Channel from Calais to Dover and rode a train to London. After sightseeing in London (The British Museum and other sites), he headed to Scotland and settled down in Dollar.

During his journey Wang Tao jotted down his impressions of the places he visited. He later collected part of this material into his travel book, Jottings from Carefree Travel (1890), the very first travel book about Europe by a Chinese scholar. 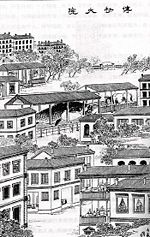 In 1867, Wang Tao was invited by the Chamberlain of Oxford University to deliver a speech in Chinese, the first ever speech delivered by a Chinese scholar in Oxford. He talked about the importance of cultural exchange between east and west, and claimed that the whole world was heading toward a common datong (大同, great unity - a utopian concept used by Confucius). [5]

By the Spring of 1870, the translations of various classics such as The Book of Songs, I Ching, (Dao De jing) and The Book of Rites were completed. During the period from 1867-1870, Wang Tao traveled to many places, including Edinburgh, Aberdeen, Huntly, Dundee and Glasgow，or took short trips to Rumbling Bridge Park, Castle Campbell, Tillicoultry, Alva and Stirling Castle; sometimes accompanied by James Legge and his third daughter, Mary.

The travel notes about these places were also included in Jottings of Carefree Travel.

Having finished his part in the translation of the Chinese Classics, Wang Tao returned to Hong Kong in the winter of 1870. In Hong Kong, he wrote two influential books: A Brief Introduction to France and Report on the Franco-Prussian War. The latter was highly regarded by high mandarins of the Qing government, including Zeng Guofan, Li Hongzhang (李鴻章), and paved the way for his later pardon by the Qing government.

During his ten-year career as editor in chief of Universal Circulating Herald, Wang Tao penned close to a thousand editorials calling for the reform of the Chinese political system, proposing the adoption of a British-style parliamentary monarchy. He also called for reform of the educational system by the introduction of Western science to the curriculum; he called for the establishment of textile, mining, railway, machinery and mining industries. His reformist editorial articles reached a wide audience. He became the de facto forerunner of the reformist movement in China. Many of his reformist articles were later published as a volume: Collection of Essays from The Tao Garden.

In 1879, at the invitation of Japanese literati, Wang Tao spent over four months in Japan. He visited many cities such as Nagasaki, Nagoya and Tokyo, and notes of this journey became one of his books: Japan Travel. [7]

In Japan, wherever he went, he was surrounded by literati, and sometimes rode in sedan chairs carried by eight men.[8] As a scholar who had lived in Europe and who had an in-depth understanding of European politics and culture, he enjoyed very high esteem in Japan. His travel needs were taken care of by the Qing Embassy in Japan.

Wang Tao was apparently quite moved by his warm welcome in Japan; he wrote that when he left Japan, he was treated with a grand dinner party attended by more than one hundred celebrities, and that he never thought he could become so famous and important, because during his youth at Puli township, he was a nobody. "How lucky I am to get such welcome by foreign scholars several thousand miles away."

The fame Wang Tao enjoyed overseas must have had an impact on the Qing government. In 1884, the influential Li Hongzang sent a letter to the governor of Shanghai, writing: "That gentleman from Kunshan (昆山)[9] is a rare genius with encyclopedic knowledge. It is a pity he took exile in Hong Kong; if it is possible to get his service for us, we don't mind a king's ransom." [10]

In the spring of 1884, Wang Tao and his family returned to Shanghai and settled down in Wusong district, where he founded Tao Garden Publishing House. He nicknamed himself "The Recluse of Tao Garden."

In 1886, Wang Tao became the head of Gezhi College in Shanghai, where he promoted Western style education.

In 1890, Wang Tao published his travelogue, Jottings from Carefree Travels. He also worked part-time for Shen Pao and the International Tribune as a special columnist; he wrote almost two hundred short stories for Shen Pao, China's most important journal of the age.

Many Chinese literati before Wang Tao had introduced Western ideas and translated books into Chinese. Wang Tao was the first Chinese scholar who participated in a two-way cultural exchange: he worked with W. A. Medhurst, A. Wylie and J. Edkins to translate Western religion books and Western science texts into Chinese; he also played an important role in assisting James Legge in the translation of a large number of important ancient Chinese classics into English. Wang Tao thus forged an important bridge between China and the West.

Some of the above listed translations are available as ebooks for as little as $2 each, because no one holds the copyright. However some of the original books are now rare collector's items, with prices as high as $4500.

Translations from English into Chinese

Books and articles in Chinese

Retrieved from https://www.newworldencyclopedia.org/p/index.php?title=Wang_Tao_(nineteenth_century)&oldid=988362
Categories:
Hidden category:
This page was last edited on 27 May 2015, at 23:10.
Content is available under Creative Commons Attribution/Share-Alike License; additional terms may apply. See Terms of Use for details.