Wampum belt given to William Penn at the "Great Treaty" in 1682.

Wampum is a string of shell beads often woven into belts and formerly used for ceremonial and treaty purposes by some American indigenous people. A contraction of the Algonquian word "wampumpeage" (wom-pom-pe-ak) or "white shell beads," wampum beads were made from the North Atlantic channeled whelk (Busycotypus canaliculatus) shell. Wampum is often confused with sewant, a similar artifact made from the Western North Atlantic hard-shelled clam. Among Europeans, the term wampum was used to refer to both forms of the work.

Wampum belts were exchanged as a form of treaty between tribes. Wampum was also used for engagement, marriage, and betrothal agreements, as well as for religious and condolence ceremonies. The shell beads symbolized internal energies of peace, harmony, and contentment. These belts were often interpreted by a man designated as a "wampum keeper," who stored his people's wampum and presented it when necessary as a medium of exchange.

Not the same as "money," the weaving patterns of colored beads expressed in wampum and sewant belts were a means of denoting different ideas according to an accepted system of wampum language. European colonists in North America, however, often used wampum or sewant beads as money since coinage was scarce.

The use of wampum declined as treaties with the Native Americans were broken, making it irrelevant for them to be recorded in wampum. Following a demoralizing period in the history of Native Americans, the demand for wampum in Native religious rites has been revived. Today, wampum housed in museums is being slowly restored back to its original role in Native American life.

Traditionally, the white wampum beads come from the inner spiral of the whelk, the North Atlantic knobbie shell. Sewant refers to the black or dark-purple shell bead from the clam shell of the western North Atlantic Ocean. Sewant or suckauhock was often confused for wampum by Europeans, and the term wampum came into general use to refer to various beads and bead-work belts. 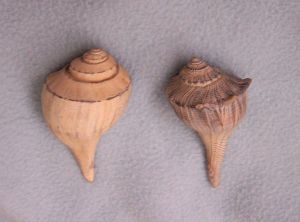 Wampum beads are traditionally made by rounding small pieces of the shells of whelks, then piercing them with a hole before stringing them. The terms for the white and black beads are wampi (white) and saki (black).

One use of wampum belts was as a memory aid in oral tradition. The belts were also used as badges of office or ceremonial devices of an indigenous culture such as the Iroquois. Perhaps because of its origin as a memory aid, loose beads were not considered to be high in value to the native peoples. A typical large belt of six feet in length might contain 6000 beads or more. Such a belt would be considered not only valuable, but sacred, because it contained so many memories.

With stone tools, the process of producing wampum and sewant is labor intensive, and the shells were available only to coastal nations. These factors increased its scarcity and consequent value among the European traders, until the Dutch glutted the market they created with it. Wampum is part of the Coat of Arms of New Brunswick.

In the area of present New York Bay, the clams and whelks used for making wampum are found only along Long Island Sound and Narragansett Bay. The Lenape name for Long Island is "Sewanacky," reflecting its connection to the "black" wampum. By the time of the arrival of the Europeans, the Pequots reputedly used their dominance of tribes around this area to gain control of the sources of the beads.

Native Americans, especially in the Iroquois Confederacy, greatly valued wampum. It was used to call a council, seat council members in the correct order, speak at the council, elect a chief, depose a chief, for an adoption ceremony, during mourning, as records and deeds, as gifts and as ornament. However, it was not a simple means of exchange or money.

When Europeans came to the Americas, they realized the importance of wampum to Native people, but mistook it for money. Soon, they were trading with the native peoples of New England and New York using wampum. Dutch colonists soon began to manufacture their own wampum as a means of exchange.

Wampum was legal tender in all 13 original colonies, and at least as late as 1701 New York was still setting an official rate. White wampum was made from various shells, but the violet/black wampum came only from the purple portion of the quahog clam and was more valuable. Generally the rate of wampum was six white or three black beads for a penny.

In the stories of adventures of early visitors to America who kept track of their expenses, wampum is ubiquitous. For example, when Jasper Dankers and Peter Sluyter came to New York to look for a home for their Dutch church in 1679, they paid to have their baggage brought from the ship to the hotel, customs duties, meals, ferries (including the Brooklyn ferry) and their tailor—all in wampum. Church ministers complained that people were putting broken wampum, undrilled wampum, or imitation wooden wampum into the collection plates.

The Hiawatha belt symbolized the unity of the five tribes. Squares from left to right represented the Mohawk, Oneida, Onondaga, Cayuga and Seneca. The line between the figures indicates an alliance. The Iroquois maintain that Hiawatha (not the same person of the Longfellow poem) formed the Iroquois Confederacy and introduced wampum.

Wampum was commonly strung up into "belts," with the contrast between the dark and light beads making patterns. These patterns had definite meanings, and their interpretation was an important task. Usually a man was designated as "wampum keeper," and kept the wampum of his people, bringing it out when required. Belts were also exchanged, often as a form of treaty. If a quarrel arose between two parties who had exchanged belts, the wampum keeper would bring out the appropriate one and, using it as a mnemonic device, recite the terms of the original treaty.

This use of wampum declined since the treaties were often broken, and it did not matter whether they were enshrined in wampum or on paper. Recently, however, native religious rites have been revived that require wampum. Some of the wampum collected and housed in museums is now being repatriated.