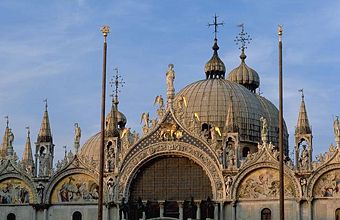 In music history, the Venetian school is a term used to describe the composers working in Venice from about 1550 to around 1610. It also describes the music they produced. The Venetian polychoral compositions of the late sixteenth century were among the most famous musical events in Europe, and their influence on musical practice in other countries was enormous.

The innovations introduced by the Venetian school, along with the contemporary development of monody and opera in Florence, define the end of the musical Renaissance and the beginning of the musical Baroque. During this time of a subtle change from reason and inquiry to a boldness that adopted a taste for the splendor and decorative of life forms, the Venetian school drew together the musicians and artists who were to partnership in ways to build bridges of reconciliation and peace.

Several major factors came together to create the Venetian school. One of these was political. After the death of Pope Leo X in 1521 and the sack of Rome in 1527, the musical establishment in Rome, long dominant in European culture, was eclipsed. Many musicians either moved elsewhere or chose not to go to Rome, and Venice was one of several places having an environment conducive to creativity.[1]

Another factor, possibly the most important, was the existence of the splendid Basilica San Marco di Venezia (commonly known as St. Mark's), with its unique interior with opposing choir lofts. Because of the spacious architecture of this basilica, it was necessary to develop a musical style which exploited the sound-delay to advantage, rather than to fight against it. Thus, the Venetian polychoral style was developed which was the grand antiphonal style in which groups of singers and instruments played sometimes in opposition and sometimes together, united by the sound of the organ. The first composer to make this effect famous was Adrian Willaert, who became maestro di cappella of St. Mark's in 1527, and remained in the position until his death in 1562. Gioseffo Zarlino, one of the most influential writers on music of the age, called Willaert "the new Pythagoras," and Willaert's influence was profound, not only as a composer but as a teacher, since most of the Venetians who followed studied with him.

Yet, another factor which promoted the rich period of musical creativity was printing. In the early sixteenth century, Venice, prosperous and stable, had become an important center of music publishing. Composers came from all parts of Europe to benefit from the new technology, which then was only a few decades old. Composers from northern Europe—especially Flanders and France—were already renowned as the most skilled composers in Europe, and many of them came to Venice. The international flavor of musical society in the city was to linger into the seventeenth century.

Organization of the Venetian School

In the 1560s, two distinct groups developed within the Venetian school: a progressive group, led by Baldassare Donato, and a conservative group, led by Zarlino who was then maestro di cappella. Friction between the two groups came to a head in 1569 with a dramatic, public fight between Donato and Zarlino during the Feast of St. Mark. Members of the conservative branch tended to follow the style of the Dutch school of music (Franco-Flemish) polyphony, and included Cipriano de Rore, Zarlino, and Claudio Merulo. Members of the progressive group included Donato, Giovanni Croce, and later Andrea Gabrieli and Giovanni Gabrieli. An additional point of contention between the two groups was whether or not Venetians—or at least Italians—should be given the top job of maestro di cappella at St. Mark's. Eventually the group favoring local talent prevailed, ending the dominance of foreign musicians in Venice. In 1603, Giovanni Croce was appointed to the job, followed by Giulio Cesare Martinengo in 1609 and Claudio Monteverdi in 1613.

Development of the Venetian School

The peak of the development in the Venetian school was in the 1580s, when Andrea and Giovanni Gabrieli composed enormous works for multiple choirs, groups of brass and string instruments, and organ. These works are the first to include dynamics, and are among the first to include specific instructions for ensemble instrumentation. Organists working at the same time included Claudio Merulo and Girolamo Diruta. They began to define an instrumental style and technique which moved to northern Europe in the succeeding generations, culminating in the works of Jan Pieterszoon Sweelinck, Dieterich Buxtehude, and eventually Johann Sebastian Bach.

The term “Venetian school” is sometimes used to distinguish it from the contemporary (and usually more musically conservative) Roman school. Other important centers of musical activity in Italy at the same time included Florence (the birthplace of opera), Ferrara, Naples, Padua, Mantua and Milan.

Major members of the Venetian school include:

Retrieved from https://www.newworldencyclopedia.org/p/index.php?title=Venetian_school&oldid=993433
Categories:
Hidden category:
This page was last edited on 19 January 2016, at 21:11.
Content is available under Creative Commons Attribution/Share-Alike License; additional terms may apply. See Terms of Use for details.