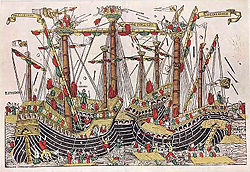 The Turkish–Venetian War of 1499–1503 refers to the naval battles between the Ottoman Empire and the Republic of Venice for the control of lands that were contested between the two parties in the Aegean Sea, Ionian Sea, and the Adriatic Sea. The opening encounter in the conflict, the Battle of Zonchio, was the first naval battle in history with cannons used on ships. The Turks, under the command of Admiral Kemal Reis, were victorious in these conflicts and forced the Venetians to finally recognize the Ottoman gains in 1503, after Turkish cavalry raids reached Venetian territory in Northern Italy.

On the one hand, this was one of many clashes that took place between the European and the Ottoman spaces during the long period of European-Ottoman hostility. On the other hand, hostility did not always characterize relations; in fact, Venice was a major trading partner with Turkey, maintained commercial outposts across the Muslim world and entered many peace-treaties with the Ottomans. Immediately after the Fall of Constantinople in 1453, they negotiated a treaty that allowed them to retain a colony there and to trade freely. While fighting Venice, the Ottomans were encouraging and growing their trade with Florence. Without denying that many battles were fought and much blood shed, a balanced historical reconstruction needs to offset the story of battles and wars, including those between Venice and Turkey, alongside episodes when commerce has thrived and peace has flourished.

Venice was a nation of merchants and had long enjoyed trading privileged with various Muslim rulers. They used diplomacy and negotiation to secure favorable terms, allowing them to build warehouses and consulates at major ports in the Muslim world. In 1403, anxious to keep control of the Aegean, they entered a treaty with the Ottomans that required Venice "to pay an annual fee to maintain her colonies and guarantee free trade in Ottoman territory."[1] This treaty was renewed in 1415. "When the Turks ventured beyond the Dandanelles" in 1416, the Venetian fleet engaged and defeated them but not before a peace mission had been attempted. When Constantinople fell in 1453, Venice immediately negotiated the continuation of trading privileged there, where it maintained a colony. The Doge told the Emperor that it was his intention to live in peace and friendship with the Ottomans.[2] This treaty was regularly renewed. Not only did it protect Venetian outposts within Ottoman space but it also "engendered colonies of Ottoman subjects in Venice itself."[3]

However, the Ottomans built up their naval capacity and one by one seized Venetian colonies, including Negropont (1470), Tana (1475) and Scutari (1479).[4] In 1471 and 1474 Venice tried to enlist the support of the Sultan of Tabriz but failed and instead signed a much less favorable treaty with the Ottomans "relinquishing all claim to lost colonies."[4] Yet the following year Venice responded to a request from Constantinople for them to send artists; they sent Gentile Bellini their most distinguished painter. Trade with the Ottomans flourished. As a result, Venice supplied the whole of Europe with carpets. Another treaty was signed in 1479. The Ottoman capture of Caffa that year, though, was especially problematic because it gave the Ottomans control of the Black Sea.[5] In 1489, Venice acquired Cyprus, which greatly strengthened their ability to control the sea-routes. The Ottomans had ambitions in Europe, however, and began to see Venice's sea-power as an obstacle. The Sultan decided to move against the Venetians at a time when they were distracted by wars in Italy.[3]

In January 1499, Kemal Reis set sail from Istanbul with a force of 10 galleys and 4 other types of ships, and in July 1499 met with the huge Ottoman fleet which was sent to him by Davud Pasha and took over its command in order to wage a large-scale war against the Republic of Venice. The Ottoman fleet consisted of 67 galleys, 20 galliots and circa 200 smaller vessels. In August 1499, Kemal Reis defeated the Venetian fleet under the command of Antonio Grimani at the Battle of Zonchio (also known as the Battle of Sapienza or the First Battle of Lepanto). Goffman says that the size of this fleet "startled and terrified Venetian observers."[6] It was the first naval battle in history with cannons used on ships, and took place on four separate days: on August 12, 20, 22, and 25, 1499. After reaching the Ionian Sea with the large Ottoman fleet, Kemal Reis encountered the Venetian fleet of 47 galleys, 17 galliots and circa 100 smaller vessels under the command of Antonio Grimani near Cape Zonchio and won an important victory. During the battle, Kemal Reis sank the galley of Andrea Loredan, a member of the influential Loredan family of Venice. Antonio Grimani was arrested on 29 September but was eventually released. Grimani later became the Doge of Venice in 1521. The Ottoman Sultan Bayezid II gifted 10 of the captured Venetian galleys to Kemal Reis, who stationed his fleet at the island of Cefalonia between October and December 1499.

In December 1499, the Venetians attacked Lepanto with the hope of regaining their lost territories in the Ionian Sea. Kemal Reis set sail from Cefalonia and re-took Lepanto from the Venetians. He stayed in Lepanto between April and May 1500, where his ships were repaired by an army of 15,000 Ottoman craftsmen brought from the area. From there, Kemal Reis set sail and bombarded the Venetian ports on the island of Corfu, and in August 1500, he once again defeated the Venetian fleet at the Battle of Modon (also known as the Second Battle of Lepanto). Kemal Reis bombarded the fortress of Modon from the sea and captured the town. He later engaged with the Venetian fleet off the coast of Coron and captured the town along with a Venetian brigantine. From there Kemal Reis sailed towards the Island of Sapientza (Sapienza) and sank the Venetian galley Lezza. In September 1500, Kemal Reis assaulted Voiussa, and in October, he appeared at Cape Santa Maria on the Island of Lefkada, before ending the campaign and returning back to Istanbul in November. With the Battle of Modon, the Turkish fleet and army quickly overwhelmed most of the Venetian possessions in Greece. Modon and Coron, the "two eyes of the Republic," were lost. Doge Agostino Barbarigo asked the Pope and the Catholic Monarchs for help, and on December 24, a Spanish–Venetian army commanded by Gonzalo de Córdoba took Kefalonia, temporarily stopping the Ottoman offensive on eastern Venetian territories.

Turkish cavalry raids reached Venetian territory in northern Italy, and, in 1503, Venice again had to seek peace, recognizing the Turkish gains. Some territory, as well as goods confiscated during the war, was returned to Venice but trade resumed. While Venice had been at war with the Ottomans, her trade rival, Florence, had benefited greatly: "Florentines were happy to see that, because of the war, the Sultan became more favorable to them than ever."[7] Venice soon resumed her trade advantage over Florence, although by the seventeenth century France and England became the Otoman's favored trade partners and replaced both the Italian states.[8] In the years after the war, however, diplomacy between Venice and the Ottomans expanded, producing a "skilled core of consuls, bailos and envoys - who" served as the "interface between the Ottoman and Venetian states." What Goffman describes as the "resulting societal overlap inescapably produced myriad Venetian cultural chameleons," meaning that in many respects Venice was a bridge between the two spheres.[9]

The complex history of Turkish-Venetian relations saw extended periods of peace, including the periods 1481-97, 1503-37, 1540-70 with Venice enjoying "extensive commercial privileges under the capitulations."[10] The two states often co-existed "sometimes uncommonly well." Arguably, they preferred to "settle their quarrels amicably."[3] Venice and the Ottomans did fight some ferocious battles. Venice also enjoyed for a long period a cordial relationship with the Mamluks. From 1250 until 1517 (when the Ottomans conquered Egypt), Venice policed the coast on behalf of the Sultans, protecting them from pirate attacks. Venice-Ottoman Confrontations were due on the one hand to the Ottoman's expansionist plans, part of the Ottoman invasion of Europe and on the other hand to Venice's desire to control and protect the sea-routes. Yet, to present the story of Turkish-Venetian relations and encounter as if there was constant hostility and conflict misrepresents reality. By listing all the wars that took place between various Muslim and European powers (identifiably Christian at the time) a case for deep rooted, historical enmity can be constructed. Some even suggest that civilatizational clash, especially Christian-Muslim is inevitable, that deep differences exist between these two spheres, making co-existence and cooperation impossible. On the one hand, much bloodshed and conflict has occurred. On the other hand, conflict has not always characterized relations; in reality, conflict has been interspersed with what the Spanish call convivencia, era of coexistence and commingling. In an increasingly interdependent and pluralist world, it is necessary to offset the story of battles and wars, including those between Venice and Turkey, alongside episodes when commerce has thrived between the two and peace has flourished.

Retrieved from https://www.newworldencyclopedia.org/p/index.php?title=Turkish–Venetian_War_(1499–1503)&oldid=992990
Categories:
Hidden category:
This page was last edited on 23 December 2015, at 22:33.
Content is available under Creative Commons Attribution/Share-Alike License; additional terms may apply. See Terms of Use for details.