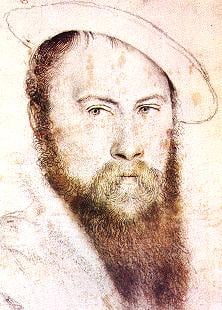 Sir Thomas Wyatt (1503 – October 6, 1542) was a poet and ambassador in the service of Henry VIII. Although Wyatt's literary output was rather small in his short life, he is nonetheless a pivotal figure in the history and development of English literature. Although poetry of quality had been written in English since the days of Geoffrey Chaucer, poetry in England, like poetry across the European continent, would not truly come into its own until the revolutionary developments of the Renaissance.

While the Renaissance in literature began centuries earlier in Italy and France, England remained largely isolated from many of the innovations of the Italian masters such as Petrarch until Thomas Wyatt first introduced them in the sixteenth century. In particular, Wyatt is credited as the first author in the English language to utilize the Petrarchan sonnet. Although it would not be until several decades after Wyatt's death (with the publication of the popular sonnet sequences of Sir Philip Sidney) that many of the forms that Wyatt helped to pioneer in the language would become widely recognized, nonetheless scholars are in agreement that Wyatt was the principal figure in recognizing the formal innovations of the Renaissance and adapting them to English poesy.

Wyatt's life was relatively brief, and as a courtier as well as a poet, Wyatt was, like Sir Walter Raleigh, often too preoccupied with political affairs to devote all his hours to writing poetry. In spite of his scant output, however, Wyatt's unique contribution to the English canon is of singular importance; within a century after Wyatt, English poetry would burst into a triumphant golden age, producing such luminaries as Shakespeare, Jonson and Marlowe. Though often underrated and even obscure, Wyatt was directly responsible for the genesis of one of the most productive periods in English literary history.

Wyatt was born to Anne and Henry Wyatt in Allington Castle, near Maidstone, Kent in the year 1503. He first entered Henry's service at the age of 13, in 1516, as "Sewer Extraordinary," and the same year he began studying at St. John's College of the University of Cambridge. He married Elizabeth Brooke, who was of royal descent and the daughter of Lord Cobham, in 1521. A year later she gave birth to a son, Thomas Wyatt, the younger. Wyatt's son would go on to earn notoriety in his own right when he attempted to seize control of the English throne several years after his father's death. In 1524 Henry VIII assigned Wyatt to be an ambassador at home and abroad, and some time soon after he divorced his wife on the grounds of adultery.

Wyatt's sister was one of Anne Boleyn's closest friends, and later chief lady-in-waiting. Wyatt himself fell violently in love with the young Anne Boleyn in the early-to mid-1520s. His grandson later recollected that the moment he had seen "this new beauty" on her return from France in winter 1522 he had fallen in love with her. He wrote several love poems and became one of Boleyn's many suitors; gossips would later allege the two had been lovers. Furthermore, Boleyn was ambitious and had learnt from her sister Mary’s example, and was discreet and chaste when it came to handling her male suitors. She unwittingly attracted King Henry VIII's attentions sometime around 1524, and Wyatt was the last of Boleyn's other suitors to be ousted by the king. After an argument over her during a game of bowls, Wyatt was sent on a diplomatic mission to Italy.

He accompanied Sir John Russell to Rome to help petition Pope Clement VII to grant Henry VIII a divorce from his first wife, Catherine of Aragon. Wyatt was captured by the armies of Emperor Charles V of the Holy Roman Empire when they captured Rome and imprisoned the pope in 1527. Wyatt managed to escape, however, and made it back to England. Upon his return, Wyatt, respected by King Henry due to his political acumen, was promoted to high marshall of Calais, and later became commissioner of the peace in Essex. In 1532, Henry VIII married Boleyn, and Wyatt accompanied the newlyweds to his dominion in Calais, and later served as a functionary in Boleyn's coronation.

In 1535 he was knighted, and in 1536 he was imprisoned in the Tower of London for quarrelling with the duke of Suffolk, and also under suspicion as one of Boleyn's lovers. During his stay in the tower he witnessed the execution of Boleyn, and he wrote a poem inspired by the experience, entitled Innocentia Veritas Viat Fides Circumdederunt me inimici mei:

Who list his wealth and ease retain,
Himself let him unknown contain.
Press not too fast in at that gate
Where the return stands by disdain,
For sure, circa Regna tonat.

The high mountains are blasted oft
When the low valley is mild and soft.
Fortune with Health stands at debate.
The fall is grievous from aloft.
And sure, circa Regna tonat.

These bloody days have broken my heart.
My lust, my youth did them depart,
And blind desire of estate.
Who hastes to climb seeks to revert.
Of truth, circa Regna tonat.

The bell tower showed me such sight
That in my head sticks day and night.
There did I learn out of a grate,
For all favour, glory, or might,
That yet circa Regna tonat.

By proof, I say, there did I learn:
Wit helpeth not defence too yerne,
Of innocency to plead or prate.
Bear low, therefore, give God the stern,
For sure, circa Regna tonat.

Wyatt was released later that year, thanks to his friendship with Thomas Cromwell, returning to his duties. Following his release, Wyatt was (somewhat surprisingly) promoted to the post of ambassador to Spain. He returned to England briefly in 1539, only to be sent almost immediately on a second diplomatic mission to Charles V of the Holy Roman Empire, which ended in 1540. It is almost certainly thanks to Wyatt's diplomatic endeavors that he came into contact with the Italian and French poetry that would radically influence his own style. Upon his return to London, Wyatt wrote a verse epistle based on his diplomatic experiences, entitled My Own John Poins:

Mine own John Poynz, since ye delight to know
The cause why that homeward I me draw,
And flee the press of courts, whereso they go,
Rather than to live thrall under the awe
Of lordly looks, wrappèd within my cloak,
To will and lust learning to set a law:
It is not for because I scorn or mock
The power of them, to whom fortune hath lent
Charge over us, of right, to strike the stroke.
But true it is that I have always meant
Less to esteem them than the common sort,
Of outward things that judge in their intent
Without regard what doth inward resort.
I grant sometime that of glory the fire
Doth twyche my heart. Me list not to report
Blame by honour, and honour to desire.

In 1541, Wyatt was charged again with treason by Edmund Bonner, now bishop of London, and the charges were again lifted. Bonner claimed that while on a mission abroad Wyatt had committed the crime of lèse majesté, or insulting remarks made against the king. Imprisoned briefly in the tower, he was given pardon only thanks to the intervention of Queen Catherine Howard, upon the condition of reconciling with his adulterous wife. He was granted a full pardon and restored once again to his duties as ambassador. He became ill not long after meeting with an envoy of the Holy Roman Empire, and died in September 1542 around the age of 39. None of Wyatt's poems were published during his lifetime—the first book to feature his verse was printed a full fifteen years after his death. He and Lord Henry Howard, Earl of Surrey were the first poets to use the form of the sonnet in English. One of his sonnets, Whoso list to hunt, thought to be about Boleyn, is among the most notorious and influential poems written in the form:

WHOSO list to hunt? I know where is an hind!
But as for me, alas! I may no more,
The vain travail hath wearied me so sore;
I am of them that furthest come behind.
Yet may I by no means my wearied mind
Draw from the deer; but as she fleeth afore
Fainting I follow; I leave off therefore,
Since in a net I seek to hold the wind.
Who list her hunt, I put him out of doubt
As well as I, may spend his time in vain!
And graven with diamonds in letters plain,
There is written her fair neck round about;
'Noli me tangere; for Cæsar's I am,
And wild for to hold, though I seem tame.'

Retrieved from https://www.newworldencyclopedia.org/p/index.php?title=Thomas_Wyatt&oldid=1033455
Categories:
Hidden category:
This page was last edited on 3 March 2020, at 19:22.
Content is available under Creative Commons Attribution/Share-Alike License; additional terms may apply. See Terms of Use for details.