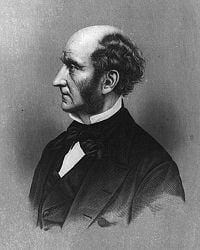 The Greek word telos means goal, end, or purpose, and teleology is the study of goals, ends and purposes. A moral theory is regarded as teleological to the extent that it defines and explains right actions in terms of the bringing about some good state of affairs. For example, a moral theory that maintains that the rightness of an action is one which achieves the goal of maximizing happiness counts as a teleological theory.

Ethical theories are often divided into two groups: teleological and deontological theories. One standard way of drawing the teleological/deontological distinction is in terms of how moral theories specify the relation between the two central concepts of ethics: the good and the right. The concept of the right is, roughly, the concept of duty, the concept of which actions we ought to perform, which it would be wrong not to perform. The concept of the good (the target of the theory of value, or axiolology (Greek: axios = worthy; logos = study of)) is concerned with the morally good properties of human beings, as well as states such as pleasure, and the experience of beauty, both of which are thought to be intrinsically good things.

Although different moral theories (or normative theories) embody different approaches to the concepts of the "good" and the "right," each must have something to say about these concepts and the way in which they are related. In other words, every ethical theory will propose a theory of right action and a theory of value, and explain how these theories connect up to one another. The theory of right action is an investigation and an attempt to answer the question: what ought I to do? The "ought" in this question is to be interpreted as a moral ought, and may be understood as equivalent to the question, "what is the right thing to do?" The theory of value provides an account of what things are good, what states of affairs ought to be promoted, or what we would like to have realised. These states include things such as pleasure, freedom, and knowledge.

All this may seem rather technical but should become clearer by considering an example of a teleological and a non-teleological theory. Firstly, consider Classical Utilitarianism as an example of a teleological moral theory. Classical utilitarianism can be broken down into two main components: a theory of value (or the "good"), and a theory of right action. Classical Utilitarianism endorses hedonism as theory of value. Hedonism then, is meant to spell out what is good. A Classical Utilitarian would formulate this in terms of utility; quite literally, utility is that which is useful to human beings. Secondly, Classical Utilitarianism endorses consequentialism as a theory of right action. A theory of right action specifies what actions moral agents ought to perform; and consequentialism says that the rightness of an action is determined by its consequences. This is incipient, if not fully articulate, in Mill’s formulation of the Principle of Utility, which he regards as the fundamental moral principle: “The creed which accepts as the foundation of morals, Utility, or the Greatest Happiness Principle, holds that actions are right in proportion as they tend to promote happiness; wrong as they tend to produce the reverse of happiness.”

Now, contrast this example of a teleological moral theory with an example of a deontological theory. A deontological theory (e.g. Kant’s) maintains that the wrongness of (some) actions is intrinsic, or resides in the kind of action that it is, rather than the consequences it brings about. So, for example, an act of killing an innocent man is wrong because it is the killing of an innocent man, rather than because it deprives someone of future happiness and causes grief to a family. So deontological theories do not define the notion of right action in terms of the promotion of good consequences. The rightness of an action is not determined by the goal it achieves, and this makes it non teleological as a moral theory.

Problems with the Teleological / Deontological Classification

This classification outlined above, while common enough, is a bit misleading for the relation between the theory of the right and the theory of value is not quite as straightforward as might initially be thought. Firstly, ancient Greek ethical theories are usually considered as teleological moralities, but do not fit easily into the above schema [Def: TM]. The above schema [Def: TM] says that a moral theory is teleological to the extent that it defines right action in terms of the promotion of good states of affairs. In shorthand, this is to say that teleological theories define the "right" in terms of the "good." To see the problem, we shall need to consider some details of ancient Greek ethics, of which, perhaps, the most well known example is Aristotle’s virtue theory.

According to Aristotle, the goal of ethics is to explain how one achieves the good life for human beings. Aristotle considers the good for man to be eudaimonia, which is most often translated as happiness. He argues that the good for man, (i.e., eudaimonia), is achieved by means of virtuous activity. Very roughly, he thinks that living virtuously is the best way of securing a happy (or eudaimon) life. His idea is that by possessing certain characteristics such as courage and wisdom, one will be equipped with the skills necessary to live well and succeed in living the best possible life one’s circumstances will permit. It is noteworthy, then, that Aristotle’s theory is based around the notion of virtue rather than right action. It is concerned foremost with the states of a good person (virtues and vices), rather than which actions are right and which are wrong. This is not to say that he neglects right action, but only that he is most centrally concerned with virtuous character.

Now, given this brief characterization, it is easy to see why Aristotle’s theory is usually regarded as a teleological morality. This is because Aristotle says that virtuous activity is activity which enables a person to live the good and happy life. In this respect, the concept of a virtue is that of which enables its possessor to achieve a certain goal, namely happiness. This makes it reasonable to regard Aristotle’s theory as a teleological moral theory; and much the same applies to the other Greek moral philosophers (see the article on eudaimonia).

The problem however is that the schema [Def: TM] outlined above does not include Aristotle’s theory as a teleological theory because Aristotle does not define the right in terms of the good. For him, the right action is part of virtuous action; it is the action which a virtuous person, or more particularly, a practically wise person would do. So the problem is that our criterion for a teleological morality seems to exclude Aristotle’s theory, which is generally regarded as a paradigmatic example of a teleological theory.

Consider what this entails with reference to Classical Utilitarianism. Since rightness is but one normative property amongst many, this does not exclude theories which focus on right action from being teleological moral theories. So by widening the definition of teleological moral theories Classical Utilitarianism remains where it seems to belong. Secondly, a Utilitarian, while focusing primarily on right action need not ignore other normative properties such as virtue. Our definition allows the Classical Utilitarian to treat virtues teleologically by saying (e.g.) that a trait of character is to be considered a virtue to the extent that it tends to produce happiness. A trait such as courage, for example, is a virtue because of a person with courage makes everyone happier. And this coheres quite nicely with what Utilitarians (Mill for example)have said about virtue as opposed to right action.

Another advantage of [Def 2: TM] is that it also enables us to understand Aristotle’s theory as teleological in a similar way. Aristotle says that trait of character is a virtue to the extent that it contributes to the happiness (eudaimonia) of its possessor; and since virtue is normative property, we have brought Aristotle’s theory within the range of a teleological morality, where it would seem to belong.

Note: Some restrictions may apply to use of individual images which are separately licensed.
Retrieved from https://www.newworldencyclopedia.org/p/index.php?title=Teleological_ethics&oldid=1031067
Categories:
Hidden category:
This page was last edited on 21 January 2020, at 18:37.
Content is available under Creative Commons Attribution/Share-Alike License; additional terms may apply. See Terms of Use for details.