Shah Abbas I of Safavid at a banquet
Detail from a ceiling fresco; Chehel Sotoun palace; Isfahan Shah Abbas I (شاه عباس اول) (January 27, 1571 - January 19, 1629) was the first Safavid ruler to achieve a united Persia. He strictly enforced Ithna Ashariya (twelver) Shi'ism, made Farsi the state language, saw off the Ottoman threat and left his nation economically prosperous, and free. Although Ismail I (1487-1524) had established the dynasty, Shah Abbas is credited with consolidating its rule. He skillfully used British assistance to solidify Iranian independence from the Sunni Ottomans, although the foothold gained in Iran by the British would ultimately lead to the unpopularity, and downfall, of the last Shah of Iran in 1979, who was accused of being too Westernized. The British gained ownership of oil rights in 1901 when William Knox D'Arcy, founder of the Anglo-Persian Oil Company, bought a concession of 480,000 square miles at a cost of twenty thousand pounds. Although Shah Abbas was ruthless, imprisoning his father and killing his son, he also tried to rule justly, struggling to work out how to rule as a good Muslim for whom religion and politics are inseparable. This legacy lives on in the post-1979 Islamic Republic of Iran, where the struggle to combine the spiritual and the temporal spheres continues, so that the whole of life can be lived in accord with the divine will. 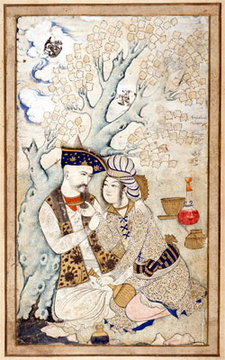 Shah Abbas I and a page
The dedication reads May life grant all that you desire from three lips, those of your lover, the river, and the cup. Tempera and gilt; Muhammad Qasim, 1627; Louvre, Paris

Shah Abbas is widely recognized to have been the most eminent ruler of the Safavid Dynasty that ruled Persia (Iran) from 1502 to 1722 C.E. He was also known as Shah Abbas the Great (شاه عباس بزرگ). He became Shah of Iran in early 1581 in a revolt against his father, Mohammad of Safavid, who was imprisoned.

In the midst of general anarchy in Persia, he was proclaimed ruler of Khorasan in 1581, and obtained possession of the Persian throne in July 1589. Determined to raise the fallen fortunes of his country, he first directed his efforts against the predatory Uzbeks, who occupied and harassed Khorasan. After a long and severe struggle, he regained Mashhad, defeated them in a great battle near Herat in 1597, and drove them out of his dominions.

He moved his capital from Qazvin to Isfahan in 1592. A few years later, in 1599, the Englishman Sir Robert Shirley directed a major army reform on his behalf. Europeans were happy to ally themselves with the shah against the Ottomans, whom they both feared and loathed. With his new army, Shah Abbas defeated the Ottoman Turks in 1603, forcing them to give back the territory they had seized, including Baghdad (their former capital), and the Abbasid (now in Iraq). In 1605, following a victory at Basra, he extended his empire beyond the Euphrates River; Ottoman Sultan Ahmed I was forced to cede Shirvan and Kurdistan in 1611. In 1615 he killed more than 60,000 Georgians and deported a further 100,000 in Tblisi after a rebellion. The united armies of the Turks and Tatars were completely defeated near Sultanieh in 1618, and Abbas made peace on very favorable terms; and on the Turks renewing the war, Baghdad fell into his hands after a year's siege in 1623. In 1622 he took the island of Hormuz from the Portuguese, with the help of the British, and much of its trade was diverted to the town of Bandar Abbas, which he had taken from the Portuguese in 1615 and subsequently named after himself. He negotiated trade treaties with the British and Dutch, and as a consequence the Safavid Empire became extremely wealthy.

Abbas' reign, with its military successes and efficient administrative system, raised Iran to the status of a great power. Abbas was a skilled diplomat, tolerant of his Christian subjects in Armenia. He sent Shirley to Italy, Spain and England in order to create a pact against the Ottomans. He curtailed the power of local chiefs, replacing them with centrally appointed governors. His royal palace boasted a huge courtyard of trickling water, flowing off in artificial streams in each direction, with the royal bathhouse off to one side. This had a high vaulted ceiling with carved skylights, covering warm, hot, and cold-water pools.

Relations with the West

Industry and trade with the West grew under Abbas. He established a royal monopoly over the silk trade. Isfahan became the center of Safavid architectural achievement, with the mosques Masjed-e Shah and the Sheikh lotf Allah mosque and other monuments like the Ali Qapu, the Chehel Sotoun palace, and the Meydan-e Shah. His painting ateliers (of the Isfahan school established under his patronage) created some of the finest art in modern Persian history, by such illustrious painters as Reza Abbasi, Mohammed Qasim and others. Despite the ascetic roots of the Safavid dynasty and the religious injunctions restricting the pleasures lawful to the faithful, the art of Abbas' time denotes a certain relaxation of the strictures. Historian James Saslow interprets the portrait by Muhammad Qasim as showing that the Muslim taboo against wine, as well as that against male intimacy, "were more honored in the breach than in the observance." Contemporary European observers at the Shah's court reflected similarly on prevalent customs. Among them was Thomas Herbert, the nineteen-year-old secretary to the British ambassador, who later related that he saw "Ganymede boys in vests of gold, rich bespangled turbans, and choice sandals, their curled hair dangling about their shoulders, with rolling eyes and vermilion cheeks." In 1979, the last Shah of Iran, Mohammed Reza (1919-1980) would lose power to a popular religious uprising that saw him as a puppet of the West. This pro-Western policy, which Iranians saw as a sell-out to the British and Americans, can be traced back to Shah Abbas. Reza's father had even banned the wearing of turbans and beards by men and chador (head covering) by women, possibly inspired by the policy of Mustafa Kemal Atatürk, founder of the modern nation state of Turkey.

Shah Abbas welcomed foreigners at his court and enjoyed religious discussion. He allowed Christians in his realm to own land and to wear whatever clothes they wanted and to ride horseback. Elsewhere, at various times, Muslims imposed a dress code on non-Muslims, and banned non-Muslims from riding. He also built hospitals and put in place other welfare provisions for his subjects. A medical publication from this time lists the instruments available for use in surgery. Some forms of anesthesia were also practiced. Shah Abbas oriented Isfahan towards Makkah. The old and new cities were connected by the Great Bazaar, which was two kilometers long and which Abbas had covered with stone and brick vaults (iwan). English and Dutch merchants resided near the bazaar, with their Go-downs (Warehouses) nearby. The Qaisariya Bazaar, the Imperial Bazaar, built and run by the emperor, was at the junction of the Great Bazaar and the new city. The silk trade operated from there.

The Safavids were descendants of Sheykh Safi od-Din who led had the Sufi order of Sasaviyeh in the thirteenth century and were also recognized as head, or Pir, of that order and of the seventh Imam. This gave their political authority a religious sanction. However, in Ithna Ashariya Shi'a, which recognizes a line of 12 Imams, no earthly political authority can claim absolute power, since this is exercised by the Hidden Imam. The Hidden Iman was the twelfth Imam, al-Madhi, who is believed to have been assumed into heaven in the year 939 C.E. Usually, religious scholars (Ulama) claim to represent the Hidden Imam on earth but Ismail and his immediate successor claimed the designation na'ib al-Imam (“deputy of the Imam”) based on their own impeccable pedigree. In addition, the Safavids claimed to be successors to the Shahs of ancient Persia, whose title had been “shadow of God on earth.” Shah Abbas subscribed to the view that religious values and Islamic principles must inform every aspect of life, including governance. Good governance is the preserve of the Imam but rulers must strive to be as just as they can, else they are unworthy to govern. Ismail I had believed that his rise to power would inaugurate an era of peace and justice, which is a strong motif in Shi'a thought. Since al-Mahdi will rule justly, those who rule in his name must also aspire to be just.

Something of a struggle emerged between the Shah and the Ulama on the question who represented the Imam. Ismail I was widely regarded as murshid-kamil, supreme guide and many thought he might be the return of Imam Mahdi. Shah Abbas ordered the execution or exile of Ulama who did not recognize his religious as well as political supremacy. The Safavids, though, were not expert scholars and appointed a Sadr to advise them, with authority to appoint and dismiss all religious functionaries. By Abbas's time, the designation “deputy of the Imam” had devolved to the Sadr. The Safavids were the first twelver dynasty to hold power - the 12 Imams had not wielded political power (with the exception of Ali ibn Abi Talib, the first Imam, who was also the fourth Sunni caliph). Shah Abbas enjoyed good relations with his Christian and Zoroastrian subjects. His new city contained Hindu cremation platforms, a Zoroastrian cemetery, a sanctuary for refugees, public baths and his free hospital. He was less tolerant of Sunni Muslims than he was of non-Muslims, insisting on the Shi'a form of Islam. He encouraged discussion of theological topics, and especially enjoyed having such conversations with foreigners.

When Abbas died, his dominions reached from the Tigris to the Indus River in the Indian Sub-continent. His fame is tarnished, however, by numerous deeds of tyranny and cruelty, particularly against his own family. Afraid of a coup by his family (as he had done to his father), he locked them up in palaces in order to keep them without knowledge of the outside world. This resulted in weak successors. He killed his eldest son, Safi Mirza, and left his throne to his grandson. On the one hand, Abbas could be ruthless. However, he secured the borders of his Shi'a kingdom, and building on Ismail I's achievements, he ensured the survival of Shi'a Islam as the overwhelming majority faith tradition of Iran (and as a smaller majority in what is now neighboring Iraq) in its twelver form. On the other hand, he could also be generous and had a genuine concern for the welfare of his subjects.