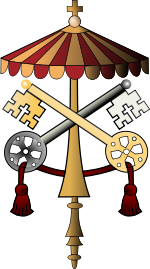 The arms of the Holy See sede vacante, used by the Holy See from a Pope's death to the election of his successor.

Sede vacante (Latin for "the seat being vacant"), refers to the vacancy of the episcopal see of a particular church in the Canon law of the Roman Catholic Church. More particularly, sede vacante refers to the vacancy of the Holy See, which occurs after the death or resignation of a pope. In this case the particular church is the diocese of Rome and the "vacant seat" is the cathedra of Saint John Lateran. During this period, the Holy See is administered by a regency of the College of Cardinals.

Sede vacante occurs when the diocesan bishop has either died, resigned, transferred to a different diocese, or lost his office and a replacement has not yet been named. If there is a coadjutor bishop, however, then "Sede Vacante" does not take place as a coadjutor bishop immediately succeeds to the episcopal see.

Vacancy of the Holy See

In the context of the papacy, sede vacante refers to the vacancy of the Holy See, which occurs after the death or resignation of a pope. In this case the particular church is the diocese of Rome and the "vacant seat" is the cathedra of Saint John Lateran. During this period, the Hol See is administered by a regency of the College of Cardinals.

According to Universi Dominici Gregis, the government of the Holy See sede vacante (and therefore of the Catholic Church) falls to the College of Cardinals, but in a very limited capacity. At the same time, all of the heads of the Roman Curia resign their offices. The exceptions are the Cardinal Camerlengo, who is charged with managing the property of the Holy See, and the Major Penitentiary, who continues to exercise his normal role. If either has to do something which normally requires the assent of the Pope, he has to submit it to the College of Cardinals. Papal legates continue to exercise their diplomatic roles overseas, and the Vicar General of Rome continues to exercise his pastoral role over the diocese of Rome during this period. The postal administration of the Vatican City State prepares and issues special postage stamps for use during this particular period, known as "sede vacante stamps."

The coat of arms of the Holy See also changes during this period. Instead of the papal tiara over the keys, the tiara is replaced with the umbraculum or ombrellino in Italian. This symbolizes both the lack of a Pope and also the governance of the Camerlengo over the temporalities of the Holy See. As further indication, the Camerlengo ornaments his arms with this symbol during this period, which he subsequently removes once a pope is elected. The arms of the camerlengo appear on commemorative euro coins minted during this period, which are legal tender in all eurozone member states.

The interregnum is usually highlighted by the funeral mass of the deceased pope, the general congregations of the College of Cardinals for determining the particulars of the election, and finally culminated in the conclave to elect a successor. Once a new pope has been elected (and ordained bishop if necessary) the sedes is no longer vacant, so this period then officially ends. Afterwards occurs the Papal Installation or Papal Coronation, depending on the form of inauguration and investiture a new pope chooses, and the formal possession of the cathedra of the Basilica di San Giovanni in Laterano.

Cardinals present in Rome are required to wait at least fifteen days after the start of the vacancy for the rest of the college before they can hold the conclave to elect the new Pope. However, after twenty days have elapsed, they must hold the conclave even if cardinals are missing. Historically, sede vacante periods have often been quite lengthy, lasting many months due to lengthy deadlocked conclaves (See list below). For many years through 1922, the period from the death of the Pope to the start of the conclave was shorter, but after William Henry Cardinal O'Connell had arrived just too late for two conclaves in a row, Pope Pius XI extended the time limit. With the very next conclave in 1939, cardinals began to travel by air.

During this period, all general and episcopal vicars lose their office unless they are themselves bishops. The governance of the particular church is then entrusted to the cathedral chapter, who then elects a vicar capitular. In particular churches without a cathedral chapter, the college of the chief advisors of the diocesan bishop (known as consultors) elect an administrator sede vacante. Both officers serve the same function: they possess ordinary power over the particular church until a newly appointed/elected diocesan bishop takes possession of the diocese. Until the election of the vicar capitular takes place, the senior auxiliary bishop, if there is one, acts as administrator.

The choice of the college or chapter is limited to bishops and priests older than 35 years. If the chapter or college fails to elect an administrator within eight days, the metropolitan archbishop (for a suffragan see) or senior suffragan bishop (for a metropolitan see) may appoint the administrator for the particular church. The Pope has been known to, on occasion, preempt the election or appointment of the vicar capitular. The officer he appoints is then known as an Apostolic Administrator sede vacante and has the same powers as the vicar capitular.

Sedevacantism is a theological position embraced by a minority of Traditionalist Catholics, which holds that the Papal See has been vacant since the death of Pope Pius XII in 1958 (or, in some cases, the death of Pope John XXIII in 1963).

The term "sedevacantism" is derived from the Latin phrase sede vacante, which literally means "while the seat is vacant," the seat in question being that of the Papal See. The phrase is used during the vacancy of the Holy See between the death or resignation of a Pope and the election of his successor.

Sedevacantists believe that the popes Paul VI (1963–1978), John Paul I (1978), John Paul II (1978–2005) and Benedict XVI (2005-) have been neither true Catholics nor true popes, but rather heretics by having espoused Modernism. In addition, some small groups of Traditionalist Catholics give allegiance to alternative Popes of their own. Since they hold that the Holy See is headed by their nominee and therefore is not in fact vacant, they are not sedevacantists in the strict sense. However, the term "sedevacantist" is often applied to them because they reject the generally accepted papal succession. Another term for them is "conclavists."

List of sede vacante periods since the 19th century

Retrieved from https://www.newworldencyclopedia.org/p/index.php?title=Sede_Vacante&oldid=745568
Categories:
Hidden category:
This page was last edited on 27 June 2008, at 03:55.
Content is available under Creative Commons Attribution/Share-Alike License; additional terms may apply. See Terms of Use for details.