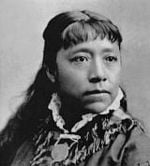 Sarah Winnemucca (1844-1891) was born Thocmentony, a Paiute name that means "Shell Flower." She was a peacemaker, teacher, interpreter, scout, and defender of the rights of Native Americans. She was notable for being the first Native American woman to secure a copyright and to publish in the English language. She was also known by her married name, Sarah Winnemucca Hopkins, under which she published her book, Life Among the Paiutes: Their Wrongs and Claims, an autobiographical account of her people during their first forty years of contact with explorers and settlers.

Sarah Winnemucca lived in two worlds; the world of Native Americans and the world of whites, and as such she was often caught in a no-win situation. On one side, her people, the Paiutes, would accuse her of being a collaborator with the U.S. Army and white government reservation officers, and on the other side, whites often did not keep their promises to her and her people. Her role as a peacemaker was a difficult one, yet one that she faced bravely and with great intelligence and eloquence. Her autobiography, Life among the Paiutes, reads like a heart crying out for help rather than as a mere recounting of historical fact.

Winnemucca's pioneering activism has only recently received positive attention, and in 2005, a statue of her was added to the National Statuary Hall Collection in the U.S. Capitol.

Born "somewhere near 1844" at the Humboldt Sink, in what is now western Nevada, Sarah Winnemucca was the daughter of Chief Winnemucca (Poito). Her father was a shaman and her grandfather, being a recognized chief of the northern Paiutes, helped to earn her the nickname from the press of "Paiute Princess."

Winnemucca's grandfather, Chief Truckee, was enthusiastic about the arrival of white people in the western part of the United States. He guided John C. Fremont during his 1843-45 survey and map-making expedition across the Great Basin to California. Later he fought in the Mexican-American War, earning many white friends. Winnemucca's initial experience of white people was one mixed with awe and fear. Her grandfather took her on a trip to the Sacramento, California, area (a trip her father, who remained skeptical of whites, refused to make). Later her grandfather placed her in the household of William Ormsby, of Carson City, Nevada, to be educated. Winnemucca soon became one of very few Paiutes in Nevada able to read and write English.

William Ormsby was later killed in action at the first battle of the Pyramid Lake War, when the militia force he led was annihilated by a Paiute force led by Winnemucca's cousin, Numaga. Winnemucca's book tells how her brother, Natchez, unsuccessfully tried to save Ormsby by faking his death. Her father and brother both fought on the Paiute side.

After the war, her family moved to the Malheur Reservation which was designated a reservation for the Northern Paiute and Bannock Indians by a series of Executive Orders issued by President Ulysses S. Grant. Winnemucca taught in a local school and acted as interpreter for Indian Agent Samuel Parrish. Parrish worked well with the Paiutes and established a coherent and well-managed agricultural program.

After four years, Parrish was replaced by agent William Rinehart, who alienated many tribal leaders when he failed to pay Paiute workers for agricultural labor in commonly held fields. Conditions at the Malheur Reservation quickly became intolerable. Winnemucca's book tells how the Indian Agent sold many of the supplies intended for the people to local whites. Much of the good land on the reservation was also illegally expropriated by white settlers. In 1878 virtually all of the people on the reservation left in order to find better land and another source of subsistence. The Bannock tribes then began raiding isolated white settlements in southern Oregon and northern Nevada, triggering the Bannock War.

During the Bannock War, Winnemucca worked as a translator for the U.S. Army. In her book, she describes scouting and message-carrying duties that she performed on behalf of the Army. Her description of engagements is frequently comical—according to her account the Bannock and the Army soldiers liked each other so much that they rarely shot to kill. Winnemucca was highly regarded by the officers she worked for, and her book includes letters of recommendation from several of them.

In her autobiography, she recounts the story of raiding a Bannock camp at night in order to rescue her father and brother, who were being held captive. She said of this brave escapade, "It was the hardest work I did for the army."

Following the Bannock War, the Northern Paiute bands she was associated with were deemed untrustworthy and forced to march to the Yakama Indian Reservation (in Washington Territory), where they endured great deprivation. Winnemucca went with them to serve as a translator even though her position did not require her to live on a reservation. Upon observing the plight of her people she began to speak out in lectures given across California and Nevada. During the winter of 1879 and 1880, she and her father visited Washington D.C. and gained permission from Secretary of the Interior, Carl Schulz, for the Paiutes to return to Malheur at their own expense. They also met briefly with President Rutherford B. Hayes. However, the promise of land at Malheur Reservation went unfulfilled for years. Winnemucca was bitterly disappointed by the orders from agent Wilbur stating that her people could not leave the Yakama Indian Reservation:

Knowing the temper of the people through whom they must pass, still smarting from the barbarities of the war two years previous, and that the Paiutes, utterly destitute of everything, must subsist themselves on their route by pillage, I refused permission for them to depart … and soon after, on being more correctly informed of the state of affairs, the Hon. Secretary revoked his permission though no determination as to their permanent location was arrived at. This was a great disappointment to the Paiutes and the greatest caution and care was necessary in dealing with them.

Report of Yakama Agent, James H. Wilbur
Annual Report of the Commissioner of Indian Affairs for the Year 1881, p. 174 and 175.
American Indians of the Pacific Northwest

In 1884, she traveled to the East Coast once again, in order to testify before Congress. She asked that the Paiutes be given lands and citizenship. She also spoke before the Senate Subcommittee on Indian Affairs. On July 6, 1884, the Senate passed a bill which enabled the Paiutes to return to Pyramid Lake, but not to their preferred location, the Malheur Reservation.

While lecturing in San Francisco, California, Sarah met and married Lewis H. Hopkins, an Indian Department employee. (She had two previous short-lived marriages to white men.) In 1883, they traveled east, where Sarah Winnemucca-Hopkins delivered nearly three hundred lectures. In Boston, the sisters Elizabeth Peabody and Mary Peabody Mann, wife of the educator Horace Mann, began to promote her speaking career. The latter helped her to prepare her lecture materials into Life Among the Paiutes, which was published in 1883.

Sarah's husband supported his wife's efforts by gathering material for the book at the Library of Congress. However, her husband's tuberculosis, combined with his gambling addiction, left Winnemucca with little financial means.

After returning to Nevada, Winnemucca-Hopkins pursued her dream of building a school for Native American children, hoping to promote the Native American culture and language. The school was forced to close after a few years, when the Dawes Act of 1887 was passed. The Act granted Native Americans citizenship, but simultaneously requiring their children to attend English-speaking boarding schools. Despite a bequest from Mary Peabody Mann and efforts to turn the school into a technical training center, Winnemucca-Hopkin's funds were depleted by the time of her husband's death in 1887, and she spent the last four years of her life retired from public activity. She died at her sister's home in Henry's Lake, Nevada, of tuberculosis. She was 47 years old.