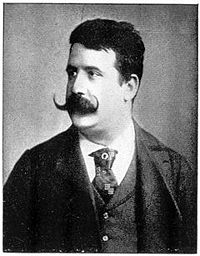 Ruggiero Leoncavallo (April 23, 1857- August 9, 1919) was an Italian opera composer and librettist of great renown. As a representative of the verismo movement in Italian opera, Leoncavallo brought a realism onto the operatic stage with his intense verbal texts and rich harmonic music. Leoncavallo's attention to the details of every-day life was his way of bringing an understanding of human responsibility to the forefront so that his audience would take responsibility for their lives and the lives of others. To Leoncavallo, each individual should be accountable for their own personal and spiritual transformation and to give to the well-being of others. He exemplified these values in his music.

The son of a judge, Leoncavallo was educated at the Conservatorio San Pietro a Majella in his native city, Naples (the date 1858, given for his birth in older histories of music, is incorrect). After some years spent teaching and in ineffective attempts to obtain the production of more than one opera, he saw the enormous success of Mascagni's Cavalleria Rusticana in 1890, and he wasted no time in producing his own verismo hit, Pagliacci. (According to Leoncavallo, the plot of this work had a real-life origin: he claimed it derived from a murder trial at which the composer's father had presided.)

Pagliacci was performed in Milan in 1892 with immediate success; today it is the only work by Leoncavallo in the standard operatic repertory. Its most famous aria Vesti la giubba ("Put on the trappings" or, in the better-known older translation, "On with the motley") was recorded by Enrico Caruso and became the world's first record to sell a million copies.

The next year his I Medici was also produced in Milan, but neither it nor Chatterton (1896)—both early works—obtained any favor, and it was not until La Bohème was performed in 1897 in Venice that his talent obtained public confirmation. (Its two tenor arias are still occasionally performed, especially in Italy, yet it was outshone by Puccini's opera of the same name and on the same subject (albeit a better libretto), which was premiered in 1896.) Subsequent operas by Leoncavallo were Zazà (1900) (the opera of Geraldine Farrar's famous farewell performance at the Met), and Der Roland (1904). Nothing from the latter opera is heard today, but the baritone aria from Zazà is still sometimes sung.

Leoncavallo also wrote songs, most famously Mattinata. He died in Montecatini, Tuscany, in 1919.

Leoncavallo was the librettist for all of his own operas. Many considered him the greatest Italian librettist of his time after Boito. Among Leoncavallo's librettos for other composers is his contribution to the libretto for Puccini's Manon Lescaut. Leoncavallo was also known as a key contributor to the verismo movement in Italian opera.

Retrieved from https://www.newworldencyclopedia.org/p/index.php?title=Ruggiero_Leoncavallo&oldid=1023829
Categories:
Hidden category:
This page was last edited on 31 August 2019, at 16:01.
Content is available under Creative Commons Attribution/Share-Alike License; additional terms may apply. See Terms of Use for details.