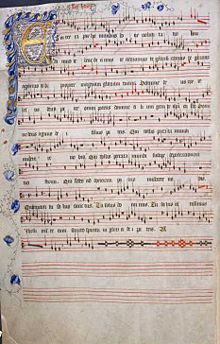 A setting of the Gloria by Roy Henry: Folio 12v of the Old Hall Manuscript.

Roy Henry ("King" Henry) (fl. around 1410) was an English composer, almost certainly a king of England, probably Henry V, but also possibly Henry IV. His music, two compositions in all, appears in a position of prominence in the Old Hall Manuscript.

Background of the Roy Henry compositions

Musicologists have not been able to agree on which English monarch wrote the two mass movements which appear, at the head of their respective sections, in the Old Hall Manuscript. Henry V, who reigned from 1413 to 1422, was known to have cultivated music in his youth (even Shakespeare alludes to this). An early biography of Henry V states:

"...he was in his youth a diligent follower of idle practices, much given to instruments of music, and fired with the torches of Venus herself."

Henry IV, who reigned from 1399 to 1413, was already in his declining years during the period in which the music was most likely written, since stylistic evidence places it around 1410. In addition, there is somewhat less evidence of his being an accomplished musician than his son. Since the portion of the manuscript containing Roy Henry's music may have been compiled somewhat later, it is possible that Henry V was king while the scribe transcribed his music, hence would have been given the name "Roy" Henry, even though he had written it during the "dissolute" years of his youth. Alas for biographers, the music contains no reference to a Sir John Falstaff.

Recent research has shown that work on the Old Hall Manuscript probably ceased on the death of Thomas, Duke of Clarence, in 1421. Since Thomas was King Henry V's brother, and his chapel's musicians are now known to have included Leonel Power, and the manuscript itself passed to Henry V's chapel on the death of Thomas, the weight of evidence is beginning to favor Henry V as the identity of Roy Henry.

Roy Henry's music consists of two movements of the ordinary of the mass: a Gloria and a Sanctus, both for three voices, and written in a fairly low register. The music itself is skillfully written, and unusually for the time, no specific plainchant can be identified as a source; both pieces may be freely composed, or the underlying chant may be part of the enormous lost repertory of music from the early fifteenth century, hence unidentifiable (the vast majority of manuscripts of the time were destroyed in the 1530s during Henry VIII's Dissolution of the Monasteries).

There is a historical discrepancy as to who Roy Henry the musician was. King Henry IV was the King of England and France who was known for his wit, his gallantry and his concern for his subjects. Through the Edict of Nantes, he established political rights for his people and extended a religious freedom to the French Protestants or Huguenots. King Henry V was known as a dignified and serious king who brought a nationalistic spirit to his kingdom due to his military conquests and the care he had for his subjects. Whether it was King Henry IV or King Henry V who composed the two mass movements, it demonstrates that music was very important to royalty who sought a balance between the spiritual and the actual worlds.

Retrieved from https://www.newworldencyclopedia.org/p/index.php?title=Roy_Henry&oldid=680220
Categories:
Hidden category:
This page was last edited on 2 April 2008, at 08:37.
Content is available under Creative Commons Attribution/Share-Alike License; additional terms may apply. See Terms of Use for details.