Robert Morrison (born January 5, 1782 in Bullers Green, near Morpeth, Northumberland; died August 1, 1834 in Canton) was a Scottish missionary, and the first Protestant missionary in China. At the age of 16 he joined the Presbyterian church and decided that he wanted to become a missionary, and in 1807 he was sent to China by the London Missionary Society. He found the Chinese government hostile, but learned Chinese and acquired permission to reside in China as a Chinese Secretary and Translator of the East India Company. During his 27 years of service, he baptized only ten converts, but each one remained loyal.

Morrison produced a Chinese translation of the New Testament in 1813, and with his collaborator Dr. Milne, a translation of the entire Bible in 1821. He also compiled a Grammar of the Chinese Language (1815) and a Dictionary of the Chinese Language, in Three Parts (1815–23) for the use of westerners. Due to imperial edicts against the learning of Chinese by non-Chinese as well as the printing of books on Christianity in Chinese, Morrison and Milne moved to Malacca, Malaya where they established a printing press and a school for Chinese and Malay children, the Anglo-Chinese College. As the London Missionary Society's first missionary to China, Robert Morrison is regarded as the father of Protestant mission work there. He became an important influence in the modernization of China, and helped to build a cultural understanding between the East and the West.

Robert Morrison was born January 5, 1782 in Bullers Green, near Morpeth, Northumberland, the son of James Morrison, an active member of Scottish Presbyterian Church. In 1796 he followed his uncle James Nicholson into an apprenticeship as a boot-tree maker, and joined the Presbyterian Church in 1798 at the age of 16. He wanted to become a missionary and in 1801, he started learning Latin, Greek, and Hebrew in private, but his parents were opposed to the idea. In 1803 he entered George Collison's Hoxton Academy in London and was trained as a congregational minister.

Preparing to be a Missionary

After his mother's death in 1804, Morrison joined the London Missionary Society. The next year, he went to Mr. David Bogue's Academy in Gosport for further training. During this period he was chosen to be a missionary in China. He returned to London and studied medicine with Dr. Blair at St. Bartholomew's Hospital, and astronomy with Dr. Hutton at the Greenwich Observatory.

He became a minister in London on January 8, 1807 and was ready to go to China. It was the policy of the British East India Company not to transport missionaries on its vessels, and there were no other available ships bound for China, so Morrison was forced to stop first in New York on April 20, 1807. On May 12, 1807, he boarded a second ship, the Trident, bound for Macao.

Twenty-five years have this day elapsed, since the first Protestant Missionary arrived in China, alone and in the midst of perfect strangers, with but few friends, and with many foes. (Robert Morrison, writing to the London Missionary Society in 1832 about his arrival in China)

The Trident arrived in Macao on September 4, 1807. Immediately George Thomas Staunton discouraged him from the idea of being a missionary in China. On September 7, 1807 he was expelled from Catholic Macao and went to the Thirteen Factories outside Canton City, an area where foreign trade had been allowed since the ban on maritime activities had been lifted in the eighteenth century. In Canton City he learned the Chinese language from a student named Yong Sam-tak. It was thought that they did not get along well together. They also studied an early Chinese translation of Gospels called Evangelia Quatuor Sinice which was probably written by a Jesuit. Morrison tried unsuccessfully to adapt to Chinese customs. He fell ill and returned to Macao on June 1, 1808, having mastered Mandarin and Cantonese.

In 1809 Morrison met Mary Morton and married her on February 20, 1809. The same year he accepted the post of Chinese Secretary and Translator to the British Factory of the East India Company, and was given legitimate residency in Canton. He returned to Canton alone, since foreign women were not allowed to stay in Canton. The couple had three children, James Morrison (March 5, 1811, died on the same day), Rebecca Morrison (July 1812), and John Robert Morrison (April 17, 1814). Mary Morton died in 1821. In November 1824, Morrison married Eliza Armstrong, with whom he had five more children.

A-Sam, a lad, showed some levity and disposition to laugh....The novelty of seeing a Fan-kwei - 'foreign devil' - sitting down to address them in their own language, perhaps in broken Chinese, on new and strange topics to them, appears at first very odd, and boys are disposed to levity... (Extract from Morrison’s journal, Memoirs of the Life and Labours of Robert Morrison, by Eliza A. (Mrs. Robert) Morrison, Robert Morrison, Samuel Kidd, p. 372)

Did you know?
Robert Morrison was the first Protestant missionary to China, baptizing ten converts over a period of 27 years

Morrison remained in his post with the East India Company for the remainder of his life. During his 27 years of service, he baptized only ten converts, but each one remained loyal. The admission of the convert Liang A-fa to the office of evangelist was the first Protestant ordination performed in China. Liang was one of the Society's first converts. In his communications to the London Missionary Society, Morrison referred to "Leang Afa, the Chinese printer, who was baptized and instructed by Dr. Milne (William Milne, 1785-1822), and scourged in Canton for making Christian books" and later, "Leang Afa is busy on the Scripture Lessons, which he expects to finish in two or three months: but I am in constant fear for his safety, as he is carrying on the printing in the city of Canton."

In September 1828 Liang wrote to Morrison, "But the people here are all deceived and sunk in stupidity, respecting vain idols. Although I take the truth and exhort them, all my strength is too small to overcome such a multitude."

Liang's tracts in Chinese first introduced Hung Hsiu-ch'uan (1814-1864) to Christianity in 1836; Hung later led a religious and political rebellion against the Qing dynasty, the “Taiping Rebellion” (“Heavenly Kingdom of Great Peace,” 1850 and 1864), the largest civil war of the nineteenth century. 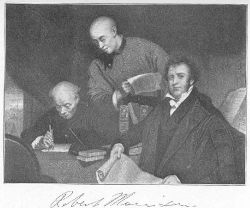 As the London Missionary Society's first missionary to China, Robert Morrison is regarded as the father of Protestant mission work there. He became an important influence in the modernization of China, and helped to build a cultural understanding between the East and the West.

The hostility of the Chinese government and of the Catholic missions, which had been attached to the Chinese courts since the 1600s, made it necessary for most Protestant missionaries to base their work in Southeast Asia. Christian Chinese language works were largely printed in colonial settlements such as Malacca, Batavia, and Singapore.

Morrison produced a Chinese translation of the New Testament in 1813, and with his collaborator Dr. Milne, a translation of the entire Bible in 1821. He also compiled a Grammar of the Chinese Language (1815) and a Dictionary of the Chinese Language, in Three Parts (1815–1823) for the use of westerners. The Bible translation took 12 years and the compilation of the dictionary, 16 years. Due to imperial edicts against the learning of Chinese by non-Chinese as well as the printing of books on Christianity in Chinese, Morrison and his collaborator Dr. William Milne moved to Malacca, Malaya (both now in Malaysia) and established a printing press.

Morrison and Milne also established a school for Chinese and Malay children in 1818, where they set up a printing press and published a monthly magazine in Chinese. The school, named Anglo-Chinese College (later called Ying Wa College), was moved to Hong Kong around 1843, after the territory became a British possession. The institution exists today in Hong Kong as a secondary school for boys.

Soon afterward, Raffles Institution, a boys’ school in Singapore, used his name for one of their “houses,” represented by the color blue. This house (a division of the school) has continued to thrive. 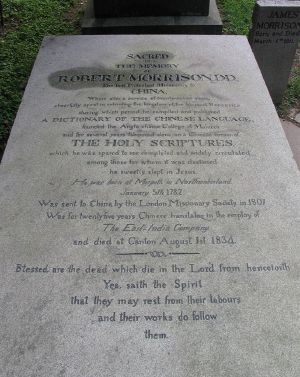 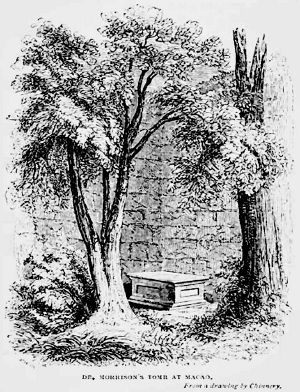 Morrison was buried in the Old Protestant Cemetery in Macau. The inscription on his marker reads:

Sacred to the memory of Robert Morrison DD.,


The first protestant missionary to China,
Where after a service of twenty-seven years,
cheerfully spent in extending the kingdom of the blessed Redeemer
during which period he compiled and published
a dictionary of the Chinese language,
founded the Anglo Chinese College at Malacca
and for several years laboured alone on a Chinese version of
The Holy Scriptures,
which he was spared to see complete and widely circulated
among those for whom it was destined,
he sweetly slept in Jesus.
He was born at Morpeth in Northumberland
January 5th 1782
Was sent to China by the London Missionary Society in 1807
Was for twenty five years Chinese translator in the employ of
The East India Company

Blessed are the dead which die in the Lord from henceforth


Yea saith the Spirit
that they may rest from their labours,

Translations from the Chinese

Translations of the Bible into Chinese

Retrieved from https://www.newworldencyclopedia.org/p/index.php?title=Robert_Morrison&oldid=1091581
Categories:
Hidden category:
This page was last edited on 16 December 2022, at 01:44.
Content is available under Creative Commons Attribution/Share-Alike License; additional terms may apply. See Terms of Use for details.