The Aihole Inscription of Ravi Kirti at the Meguti temple, a minister and poet in the court of Badami Chalukya King en:Pulakesi II, dated to 634 C.E., is in Sanskrit language and old Kannada script. It is considered one of the finest pieces of extant poetry in the Sanskrit language and is a eulogy of King Pulakesi II and his conquests.

Pulakesi II (Kannada: ಇಮ್ಮಡಿ ಪುಲಿಕೇಶಿ) (r. 610 - 642 C.E.) reigned over the Chalukyas of Badami an Indian royal dynasty that ruled large parts of southern and central India between the sixth and the twelfth centuries during an era that saw their kingdom extend over most of the Deccan. He defeated his uncle, Mangalesa, who had usurped the throne following the death of his father, Pulakesi I. Pulakesi II invested most of his kingdom's wealth and resources expanding the Chalukyas of Badami domain. He fought one successful campaign after another during much of his rule. At first, he invested himself in quelling rebellion from provinces that sought to take advantage of the turmoil caused by civil war with his uncle, Mangalesa, including Appayika and Govinda.

After quelling the rebellions, Paulakesi II embarked upon a campaign to expand his kingdom throughout most of the Deccan. His court poet, Ravikirti, left accounts of his campaigns that are considered superlative examples of Indian literature. He built impressive cities and became the first Indian ruler to mint gold coins, becoming the wealthiest of the Chalukyas rulers. The influence of the Chalukyas of Badami waned after Pulakesi II's death, leaving his five sons to fight over the right to ascend the throne. However, the glory of his rule lived on to inspire the people of India through the writings of his court poet, Ravikirti.

Ereya, who assumed the name Pulakesi on his coronation, had been the son of the Chalukya king Kirtivarman I.[1] When Kirtivarman died in 597, Ereya was still a young boy and Kirtivarman's brother Mangalesa governed the kingdom as regent until Ereya came of age. Mangalesa was a capable ruler and continued expanding the kingdom. When Ereya came of age, desire for power drove Mangalesa to deny prince Ereya his rightful place on the Chalukya throne He sought to perpetuate his own line by making his son heir apparent.

Ereya took shelter in the Bana territory (Kolar), organized an army with the help of his allies and declared war on his uncle. According to an Peddavadagur inscription, Mangalesa was defeated and killed in the battle of Elapattu Simbige. Ereya ascended the Chalukya throne as Pulakesi II and assumed the title Parameshwara. 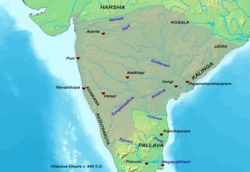 Consolidation of the Chalukya dynasty

Pulakesi had to face several obstacles soon after his coronation.[2] The civil war had given fresh hope to feudatories and adventurers; some of them felt emboldened to throw off their allegiance to the Chalukyas. The Aihole inscription of 634 found in an Aihole Jainlaya conveys the mood of rebellion.[3] Pulakesi had to face the challenge of Appayika and Govinda, perhaps loyal adherents of the defeated Mangalesa. One, or possibly both, had been Mangalesa's son. Pulakesi confronted their army on the banks of the river Bhima. Appayika fled from the battlefield, while Govinda surrendered.

After consolidating his position, Pulakesi II organized and enlarged his army. He then embarked upon a series of conquests to expand his dominions. The Aihole inscription dated 634, composed by Pulakesi's court poet Ravikirti, provide accounts of campaigns. The inscription constitutes one of the finest pieces of poetry in Indian literature. Written in Sanskrit language and Hale Kannada script, it is the most important source of information regarding the rule of Pulakesi II.[4]

Conquests in the West

He subjugated the Kadambas of Banavasi, the Gangas of Talakad and the Alupas of South Kanara. He defeated the Mauryas of the Konkan, and the port of Puri (modern Elephanta Island) fell after a naval battle. Victories over the Latas, the Gurjaras and the Malawas followed, resulting in the annexation of the Gujarat area. Those victories have been researched by historians R.C. Majumdar[5] and Sircar. The Ganga ruler Durvinita gave one of his daughters in marriage to Pulakesi, and she became the mother of Vikramaditya I.

Pulakesi next swept over the Panduvamsis in Kosala, followed by victory over the Eastern Gangas of Kalinga and the capture of the fort of Pishtapura (Pithapuram). He subjugated the Vishnukundins and captured the Kunala area in the Vengi region, appointing his brother Kubja Vishnuvardhana (also called Bittarasa) as viceroy of his Eastern territories. Vishnuvardhana eventually founded the Eastern Chalukyas dynasty.

Moving further south, Pulakesi II routed the Pallava king Mahendravarman I in the battle of Pullalur, only twenty five kilometers north of the Pallava capital. A pitched battle followed and, although Mahendravarman saved his capital, he lost the northern provinces to Pulakesi. Durvinita of the Gangas dynasty from the West and the Pandyan king Jayantavarman from the South aided the Chalukya king. The Chalukya army laid siege to the Pallava capital at Kanchipuram, but failed to conquer the kingdom, returning home thwarted. The Chalukya victory over Mahendravarman I initiated an enduring line of conflict in South India.[6]

When Pulakesi II advanced to Narmada, he encountered Harshavardhana of Kanauj, known by the title Uttarapatheshvara (Lord of the North). In a decisive battle fought on the banks of the river Narmada, Harsha lost a major part of his elephant force and retreated. The Aihole inscription describes how the mighty Harsha lost his harsha (joy) when he suffered the ignominy of defeat. Pulakesi entered into a treaty with Harsha, designating the Narmada River as the border between the Chalukya Empire and the Harshavardhana Empire. 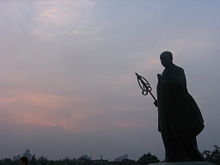 The statue of Xuanzang at the Great Wild Goose Pagoda in Xi'an, which was built to house the texts he brought back from India.

The Chinese traveler Hieun-tsang describes the event thus: "Siladityaraja (i.e., Harsha), filled with confidence, himself marched at the head of his troops to contend with this prince (i.e., Pulakesi); but he was unable to prevail upon or subjugate him."[7]

A great victory for the Chalukya monarch, he assumed the titles of Parameswara (Paramount Overlord), Satyashraya, Prithvivallabha. With that victory, Pulakesi's control extended completely over Southern India, including Maharashtra and parts of Madhya Pradesh and Gujarat. He took the title Dakshinapatheshvara (Lord of the South) at the same time. As the Lohner plates of Pulakesi II (630) make no mention of his northern victory, those victories most likely happened between 630 and 634.

Pulakesi II experienced several reversals during the last days of his reign. Pulakesi undertook another expedition against the Pallavas in the hope of achieving more decisive results. Pulakesi's extensive campaigns had depleted the treasury, hampering his ability to mount a successful campaign.

Narasimhavarman I succeeded Mahendravarman I, leading the Pallavas into recovery. Pulakesi began his campaign by attacking the Banas, vassals of the Pallavas. After overrunning them, Pulakesi invaded the Pallava kingdom proper and once more threatened the Pallava Capital. The Pallava forces under Narasimhavarman defeated the Chalukyas in several battles including one at Manimangalam, east of Kanchipuram. In those battles, the Sinhalese king Manavarma assisted the Pallava army. Pulakesi's expedition ended in failure. The Pallavas, encouraged by their success, invaded deep into Chalukya territory capturing and sacking Vatapi (Badami). As a result of his military success, the ruler of the Pallavas, Narasimhavarman I, assumed the title of Vatapikonda ("the conqueror of Vatapi"). Vatapi remained under Pallava control for twelve years.

The thirteen years that followed, Chalukya power diminished.[8] Pulakesi exchanged ambassadors with the Shah of Persia Khosrau II, his reception of the Persian ambassador depicted in one of the paintings in the Ajanta caves. The Chinese traveler Hsuan Tsang, who visited India in the seventh century, wrote admiringly of Pulakesi and his Empire.

Pulakesi was the first ruler in South India to issue gold coinage. Broad and circular in shape, the punch-marked coins had various punches at the edge, and a central punch depicting a Varaha or Boar. The Boar was the royal emblem of the Chalukyas. Contemporary literature cites the gold coins of south India as Varahas. Pulakesi had five sons, Chandraditya, Adityavarma, Vikramaditya, Jayasimha and Ambera who fought among themselves after his death, dividing the kingdom into territories. Pulakesi's third son, Vikramaditya I, became the Chalukya king in 642 C.E., attempting to re-unite the kingdom after defeating his brothers.