Aihole (Kannada ಐಹೊಳೆ) is a town in the Bagalkot district of Karnataka, India. Ancient inscriptions reveal the earlier names "Ayyavole" and "Aryapura" for the town. Historically significant, Aihole has earned the title cradle of Hindu rock architecture. The Chalukyas created their style of rock architecture by bringing together northern and southern India styles. Numerous temples and caves of historical importance populate Aihole, making the site one of the highest traffic spot for visitors in north Karnataka.

The temples fall broadly into two groups, the Kontigudi and Galaganatha. The Durga temple stands as the most famous of the Aihole temples, built similar to a Buddhist chaitya. The first phase of temple building in Aihole dates back to the sixth century C.E., the second phase up to the twelfth century C.E. Some temples were even built as early as the fifth century C.E.

The first capital of the early Chalukyas, artisans designed and constructed more than 125 temples in a variety of architectural styles. Craftsmen used the location as a laboratory to experiment with rock cut architecture. They gained experience in their craftsmanship, moving on to build the great temples of Pattadakal. Aihole lies to the east of Pattadakal, along the Malaprabha River, while Badami sits to the west of both. Pulakesi I, one of the greatest rulers of this dynasty, moved the capital to Badami which had been known as Vatapi at that time.

The early Chalukyas inherited architectural styles mostly from their neighbors to the north and south of their kingdom.[1] The practice of using curved towers decorated with blind arches came from northern India. Pilastered walls with panel inserts constitute a southern Indian style. Deccan style consists in balcony seating, angled eaves and sloping roofs, and elaborately carved columns and ceilings.[2] In short, they brought together the prevailing architectural styles in their neighborhood to create the Chalukyan style.

Typical features unique to Early Western Chalukyan architecture include mortar-less fitting of stone, an emphasis on length rather than width or height, flat roofs, and richly carved ceilings. Sculpturally, they placed an emphasis on relatively few major figures, which tend to stand placed in isolation from each other rather than arranged in groups.[3] The aesthetic sensibility of sculpture from that period retained an impulse toward a classical style that failed to transmit into later periods of Indian art.[4] 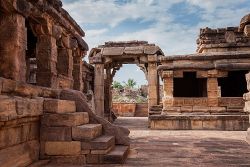 The prominent temple groups include the Kontigudi group and the Galaganatha group of temples, although historians have divided all the temples into twenty two groups.

A group of three temples has been referred to as the Kontigudi group of temples.[5] One of those temples, the Lad Khan temple, had been named after a mendicant that lived there in the nineteenth century. The Huchiappayyagudi temple and the Huchiappayya temple complete the trio of temples. 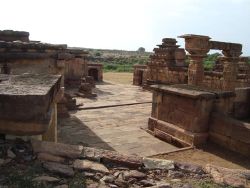 The Galaganatha group sits among nearly thirty temples on the bank of the river Malaprabha.[6] The main temple of the Galaganatha temple enshrines Shiva—Galaganatha has a curvilinear shikhara, and has images of Ganga and Yamuna at the entrance.