Polish-Ottoman War (1672–1676) or Second Polish-Ottoman War was a war between the Polish-Lithuanian Commonwealth and the Ottoman Empire. It ended in 1676, with the Treaty of Żurawno and the Commonwealth ceding control of most of its Ukraine territories to the Empire. It can be seen as part of the Great Turkish War and as part of the series of war between the Ottomans and Europe. The Polish king, Jan Sobieski (elected 1674) emerged from the conflict as the premier general in defending Europe from the Ottoman advance, winning a famous victory at Vienna in 1683, which in some respects can be regarded as the real end of the Polish-Ottoman War. After this victory, he is said to have paraphrased Julius Caesar's famous words, saying "Veni, vidi, Deus vicit," ("I came, I saw, God carried the victory").[1] The Commonwealth, however, was terminally weakened as a result of this conflict, which exhausted its finances. It only lasted until 1795. Ironically, the Ottomans were the only country which refused to recognize the 1795, partition of Poland between Russia and Austria following defeat by Russia. The Ottomans, too, were weakened by this war. The Ottomans lost their military superiority and were led by a succession of incompetent sultans from roughly the end of this war to the empire's own demise.

After 1683, they never posed a real threat to Europe, although talk of the Turkish peril or threat continued into the nineteenth century. Stalemate with their European and Asian neighbor countries, the European development went into overdrive. It was now clear the Ottoman Empire was not the superpower it has previously been. In 1699, the Ottomans acknowledged that the Austrian empire could sign a treaty with the Ottomans on equal terms, and actually lost a large territory which had been in Ottoman possession for two centuries. Yet for many in Europe the term “Turk,” which was regarded as synonymous with “Muslim,” still struck terror in their hearts. The Ottomans seemed a threat to European security. It is from this historical encounter that European Islamophobia partly stems, the idea that Islam is incompatible with the European ethos, and therefore a danger to the European way of life.

The causes of the Polish-Ottoman War of 1672–76 can be traced to 1666. Then Petro Doroshenko Hetman of Right-bank Ukraine, aiming to gain control of Ukraine but facing defeats from other factions struggling over control of that region, in a final bid to preserve his power in Ukraine, signed a treaty with Sultan Mehmed IV that recognized the Cossack Hetmanate as a vassal of the Ottoman Empire.

In the meantime, Commonwealth forces were trying to put down unrest in Ukraine, but were weakened by decades long wars (Chmielnicki Uprising, The Deluge and Russo-Polish War (1654–1667)). Trying to capitalize on that weakness, Tatars, who commonly raided across the Commonwealth borders in search of loot and plunder, invaded, this time allying themselves with Cossacks under hetman Doroshenko. They were, however, stopped by Commonwealth forces under hetman Jan Sobieski, who stopped their first push (1666–67), defeating them several times, and finally gaining an armistice after the battle of Podhajce.

In 1670, however, hetman Doroshenko tried once again to take over Ukraine, and in 1671 Khan of Crimea, Adil Giray, supportive of the Commonwealth, was replaced with a new one, Selim I Giray, by the Ottoman sultan. Selim entered into an alliance with the Doroshenko's Cossacks; but again, like in 1666–67, the Cossack-Tatar forces were dealt defeats by Sobieski. Selim then renewed his oath of allegiance to the Ottoman Sultan and pleaded for assistance, to which the Sultan agreed. Thus, an irregular border conflict escalated into a regular war, as the Ottoman Empire was now prepared to send its regular units onto the battlefield in a bid to try to gain control of that region for itself. 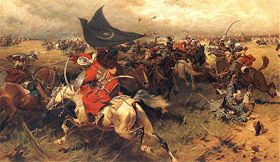 "Battle Over the Turkish Banner" by Józef Brandt.

Ottoman forces, numbering 80,000 men and led by Grand Vizier Köprülü Fazıl Ahmed and Ottoman sultan Mehmed IV, invaded Ukraine in August, took the Commonwealth fortress at Kamianets-Podilskyi and besieged Lviv. Sobieski's forces were too small to meet the Ottoman army head on, and could only score several minor tactical victories over the Ottoman detached units. Unprepared for war, and torn by internal conflict between the king Michał Korybut Wiśniowiecki and the szlachta nobility, the Commonwealth Sejm could not act to raise taxes and gather a larger army. Its representatives were forced to sign the Peace of Buczacz in October that year, which ceded to the Ottomans Commonwealth part of Ukraine (the Right-bank Bracław Voivodeship, Podole Voivodeship, and part of Kiev Voivodeship; the Left-bank of the Ukraine was already controlled by Muscovy since the Treaty of Andrusovo of 1667) and promised an annual tribute of 22,000 ducats.

Instead of ratifying the peace treaty, the Commonwealth Sejm, with most of the deputies finally united by anger due to the territorial losses and the demeaning tribute (which could in fact be seen as reducing the Commonwealth to Ottomans' vassal) finally raised taxes for a new army (of about 37,000 strong was raised) and increased the Cossack register to 40,000. Hetman Jan Sobieski led a military campaign against the Ottomans and dealt several defeats to the Ottomans; of which the battle of Khotyn was the largest; next he took control of the Moldavia territory and most of disputed Ukrainian lands. That year the king Michał Korybut Wiśniowiecki died, and in recognition of his victories and dedication, Jan Sobieski was elected King of Poland. "Folding of the standards" by Józef Brandt.

Over the next year, however, the Polish forces were subject to attrition, as the Sejm again refused to raise taxes and pay the army, resulting in mass desertions of unpaid soldiery. The Polish problems were further aggravated by the incompetent leadership of hetman Michał Kazimierz Pac, who obstructed Sobieski's leadership, while the Ottomans continued to receive reinforcements. Nonetheless, in 1674, the Commonwealth resumed the offensive, taking opportunity of a new Muscovy-Ottoman conflict that year, and the Polish-Ottoman war remained undecided. In 1675, however, the Ottomans brought in a fresh force of 200,000. Sobieski again managed to delay Ottoman advance, but with the Sejm still refusing his pleas for more funds and a larger army, the Commonwealth was unable to deal a decisive defeat to the Ottomans.

In 1676, after the battle of Żurawno, a new peace treaty was signed, the Treaty of Żurawno, which resulted in a peace treaty partially reversing those from Buczacz: the Ottomans kept approximately two thirds of the territories they gained in 1672, and the Commonwealth no longer was obliged to pay any kind of tribute to the Empire; a large numbers of Polish prisoners were released by the Ottomans.

The war showed the increasing weakness and disorder of the Commonwealth, who by the second half of the seventeenth century had started its gradual decline that would culminate, a century later, with the partitions of Poland. The unruly Sejm, paralyzed by liberum veto and foreign bribery, was dominated by politicians who thought in short term gains only and constantly refused the funds to raise an army, as it appeared that most of the Commonwealth would not be ravaged by the Ottoman armies. Even after the unfavorable Buczacz treaty, which convinced the Sejm to raise the taxes, once initial successes were achieved, the majority of the Sejm again couldn't be convinced to keep up the pressure on the enemy; soldiers were left unpaid and desertions on a mass scale negatively affected the Polish cause. This apparent inability to defend itself, also seen in the other recent and future conflicts the Commonwealth was involved in, increasingly invited foreign forces to prey on the Commonwealth.

On the Polish side the fighting was done mostly by a force privately financed by Jan Sobieski. He gained reputation as an able, courageous commander and a patriot, having invested part of his personal fortune in the defense of the Commonwealth. In 1674, he was elected King of Poland. Sobieski's reputation also preceded him in the Ottoman Empire, and his victory several years later at the siege of Vienna in 1683, where he commanded a relief force of Polish soldiers would ensure his reputation as the top commander fighting the Ottomans. However, even he would not be able to stop the Commonwealth from decline and introduce reforms that would save the country. The Commonwealth did regain the territories lost in this war in the 1699 Treaty of Karlowitz, but that was one of the last of its victories.

Retrieved from https://www.newworldencyclopedia.org/p/index.php?title=Polish-Ottoman_War_(1672–1676)&oldid=1089073
Categories:
Hidden category:
This page was last edited on 24 November 2022, at 08:33.
Content is available under Creative Commons Attribution/Share-Alike License; additional terms may apply. See Terms of Use for details.