The Place Stanislas, known colloquially as the place Stan', is a large pedestrian square in Nancy, Lorraine, France.

Built between the Old Town in the north and the New Town in the south, Place Stanislas is the true heart of the city of Nancy. In 1752, Stanislaw Leszczynski decided to create a royal square in honor of his son-in-law, Louis XV. After three years under the direction of architect Emmanuel Héré, the square was inaugurated in 1755 with a bronze statue of Louis XV at its center (this statue disappeared during the French Revolution and was replaced in 1831 by one of Stanislaw). The square is famous worldwide for its wrought-iron railings decorated with gold leaf designed by Jean Lamour. Surrounding the square are the Town Hall, Grand Hotel, Nancy Opera House and Museum of Fine Arts.

Place Stanislas is known as the oldest example of a modern capital where an enlightened monarch proved to be sensitive to the needs of the public.

Since 1983, the architectural group comprising the Place Stanislas and the extension of its axis, the Place de la Carrière and Place d'Alliance, have been listed on the list of UNESCO World Heritage Sites.

Around 1000 C.E., Duke Gérard d'Alsace, the founder of the duchy of Lorraine, decided to set up a small fortified town named Nanciacum. Between the twelfth and fifteenth centuries, Nancy became the capital of the duchy and was further fortified. The succession of Dukes of Lorraine continued to beautify the town, the area which is now known as the Old Town (Ville-Vieille). It was during this period that the Ducal Palace, Porte de la Craffe (city gate) and St-Epvre basilica were built.

The New Town (Ville-Neuve) was subsequently founded by Charles III, Duke of Lorraine in the late sixteenth century in a style that was completely different from the Old Town, notably with streets intersecting at right angles. The Primatiale (now the cathedral) was built, as was the Notre-Dame-de-Bonsecours church. The religious wars caused Nancy to strengthen its fortifications and the New Town thus gained a fortified complex that was separate from the Old Town. 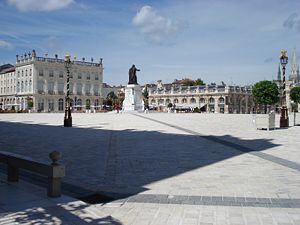 A view from the South-East corner

In 1736, the duchy of Lorraine came under the control of the king of France, Louis XV, who appointed his father-in-law, Stanislaw (Stanislas) Leszczynski to oversee the area. An art lover and science enthusiast, the Polish monarch endowed the town with its finest squares: Place Royale (now Place Stanislas), Place de la Carrière and Place d'Alliance. Upon his death in 1766, Lorraine became French.[1]

Stanisław Leszczyński took on this major urban planning task as a way to link the medieval old town of Nancy and the new town. The square would also be a place royale to honor his son-in-law, Louis XV. The design linked two handsome buildings that already existed, the Hôtel de Ville, now centered on its grand square, and the Hôtel du Gouvernement. The seat of city government and the seat of ducal government[2] faced one another as complements through a series of rational, symmetrical, yet varied urban spaces unequaled in Europe at the time.

The square and the surrounding buildings, unified by their colossal orders, were designed by the royal architect Emmanuel Héré de Corny (1705–1763). Construction began in March 1752 and ended in November 1755. Barthélémy Guibal and Paul-Louis Cyfflé created a bronze statue of Louis XV, which stood in the middle of the square until it was removed during the Revolution and replaced with a simple winged figure. The square was renamed "Place du Peuple," and later "Place Napoléon." In 1831, a bronze statue of Stanisław (Stanislas in French) was placed in the middle of the square, since then known as the "Place Stanislas."

The square has always been used for public assemblies and festivities, but it has undergone several make-overs in its history, even serving as a parking lot between 1958 and 1983. In 2004 and 2005 the square underwent a massive restoration, inspired by the original eighteenth-century plans. The ten-month project cost approximately 9 million euros.[3] The inauguration of the new Place Stanislas in May 2005 coincided with the square's 250th anniversary. 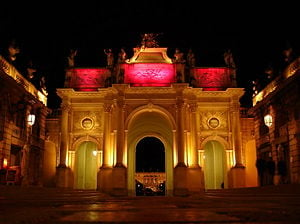 The Place Stanislas is 125 meters long and 106 meters wide. It is paved with light ochre stones, with two lines of darker stones forming a diagonal cross motif. The square is surrounded by an architecturally harmonious ensemble of buildings, most notably:

An Arc de Triomphe by Héré stands in the center of the fourth side, leading to the adjoining Place de la Carrière, where the main axis is developed as a double avenue of trees, with symmetrical buildings facing each other down its length. Built in the middle of the ramparts that separated the New Town from the Old Town, the triumphal arch occupies the northern part of Place Stanislas. It depicts Louis XV as both "Peace-loving Prince" (left-hand side) and "Victorious Prince" (right-hand side).

At the far end is the Place d'Alliance, defined by the hemicycles of colonnades that enclose the sides and are carried across the pre-existing façade of the Palais du Gouvernement.

The statue in the center of the Place Stanislas, created by Georges Jacquot (1794–1874), represents Stanislas standing, dressed in flowing robes, holding a sword in his left hand and pointing towards the north with his right hand. The inscriptions on the high marble pedestal read :

The square is famed throughout the world for its wrought-iron railings decorated with gold leaf and designed by Jean Lamour. The four corners and West and East sides of the square feature gilded wrought iron gates and lanterns. Lamour, (1698–1771), also designed the wrought iron balustrade on the main staircase in the Hôtel de Ville and the balcony across the center of its main façade. The North-West and North-East corners also feature ornate fountains designed by Barthélémy Guibal (1699–1757).

Retrieved from https://www.newworldencyclopedia.org/p/index.php?title=Place_Stanislas&oldid=1089040
Categories:
Hidden category:
This page was last edited on 24 November 2022, at 06:22.
Content is available under Creative Commons Attribution/Share-Alike License; additional terms may apply. See Terms of Use for details.