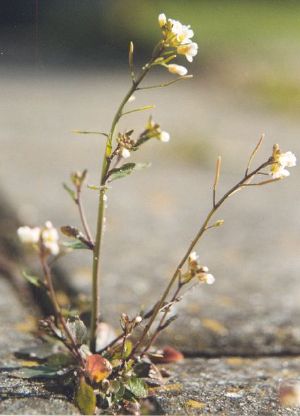 The Thale Cress (Arabidopsis thaliana) is regulated by blue to UV light.[1]

The growth or movement of an organ towards a light source was originally known as heliotropism, or bending toward or away from the sun, but was renamed more generally phototropism when it was recognized that this phenomena also occurs in response to any light, including artificial light (Ray 2001; Firn and Digby 2001).

Phototropism reflects a remarkable harmony between plants (or fungi) and their environment. As sessile organisms, plants cannot walk toward or away from various environmental stimuli. However, phototropism allows the plants to "move" harmoniously in response to the direction of sunlight, just as other tropisms allow the plant to move or grow towards water (hydrotropism) or in the direction of gravity (gravitropism).

Phototropism is generally described as that phenomena dealing with a directional plant growth or movement in which the direction of growth is determined by the direction of the light source. It is usually differentiated from heliotropism, which is movement or growth in response to sunlight, in that phototropism refers to any light source, including artificial light. 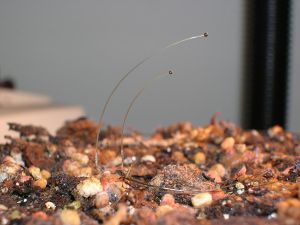 Some of the first experiments on this phenomena of phototropism (heliotropism) were done by Charles Darwin, who noticed that plants with foil on the tip did not bend toward the sun (Ray 2001; Thiers 2002). (Darwin also was one of the first Europeans to document that roots show positive gravitropism and stems show negative gravitropism. That is, roots grow in the direction of gravitational pull, in other words downward, and stems grow in the opposite direction, in other words, upwards.)

Phototropism is enabled by auxins. Auxins are plant hormones that have many functions. In this respect, auxins are responsible for expelling H+ ions (creating proton pumps), which decreases pH in the cells on the dark side of the plant. This acidification of the cell wall region activates enzymes known as expansins that break bonds in the cell wall structure, making the cell walls less rigid. In addition, the acidic environment causes disruption of hydrogen bonds in the cellulose that makes up the cell wall. The decrease in cell wall strength causes cells to swell, exerting the mechanical pressure that drives phototropic movement.

Retrieved from https://www.newworldencyclopedia.org/p/index.php?title=Phototropism&oldid=682296
Categories:
This page was last edited on 2 April 2008, at 14:16.
Content is available under Creative Commons Attribution/Share-Alike License; additional terms may apply. See Terms of Use for details.