Operation Gibraltar, the name given to Pakistan's failed plan to infiltrate the disputed Jammu and Kashmir region in north-western India and start a rebellion against Indian control. Launched in August 1965, Pakistan Army soldiers and guerrillas, disguised as locals, entered Jammu and Kashmir from Pakistan with the intention of fomenting an insurgency among Kashmiri Muslims. The strategy went awry from the outset as the locals displayed unexpected reticence to cooperate, while Indian authorities detected the infiltrators. An Indian counterattack that resulted in minor victories followed the debacle.

The operation proved significant as it sparked a large scale military engagement between the two neighbors, the first since the Indo-Pakistani War of 1947. Its success, as envisaged by its Pakistani planners, could have given Pakistan control over a unified Kashmir; something that Pakistan desired to achieve at the earliest opportunity. The plan misfired and triggered a war (the Indo-Pakistani War of 1965).

Following the First Kashmir War which saw India gaining the majority of the disputed area of Kashmir, Pakistan sought an opportunity to win back the areas lost. The opening came after the Sino-Indian War in 1962 when India lost to China, resulting in the Indian Military undergoing massive changes both in personnel and equipment. During that period, despite numerical weaker than the Indian Military, Pakistan's armed forces had a qualitative edge in air power and armor over India,[4] which Pakistan sought to utilize before India completed its defense build-up. The Rann of Kutch episode in the summer of 1965, where Indian and Pakistani forces clashed, resulted in some positives for the Pakistani Army. Moreover, in December 1963, the disappearance of a holy relic[5] from the Hazratbal shrine in Srinagar, created turmoil and intense Islamic feeling among Muslims in the valley, viewed by Pakistan as ideal for revolt.[6] Those factors bolstered the Pakistani command's thinking: that the use of covert methods followed by the threat of an all out war would force a resolution in Kashmir.[7][8][9] Assuming that a weakened Indian Military fail to respond, Pakistan chose to send in "mujahideens" and Pakistan Army regulars into Indian state of Jammu and Kashmir.

The original plan for the Operation, codenamed Gibraltar, had been prepared as early as the 1950s; the scenario seemed perfect for pushing the plan forward. Backed by foreign minister Zulfiqar Ali Bhutto and others, Pakistan aimed to "attack by infiltration" by a specially trained irregular force of some 40,000 men, highly motivated and well armed. They reasoned that the conflict could be confined to Kashmir. In the words of retired Pakistani General Akhtar Hussain Malik, they aimed "to defreeze the Kashmir problem, weaken Indian resolve, and bring India to the conference table without provoking general war."[10] As a result, launching "Operation Nusrat" laid the groundwork and intelligence gathering for execution of the plan aimed to locate gaps in the Cease Fire Line (CFL). Pakistan intended the CFL to serve as entry points for the mujahideen, and to gauge the response of the Indian army and the local population.[11]

Despite initial reservations by the President of Pakistan Ayub Khan, the military launched the operation. In the first week of August 1965, (some sources state 24 July)[12] Pakistani troops, members of the SSG commandos and irregulars began to cross the Cease Fire Line dividing Indian- and Pakistani-held Kashmir. Several columns aimed to occupy key heights around the Kashmir valley and encourage a general revolt, followed by direct combat by Pakistani troops. According to Indian sources as many as 30,000[13] to 40,000 men had crossed the line, while Pakistani sources put it at 5,000 -7,000.[14] Those troops—called "Gibraltar Force"—received unique code names, mostly after historically significant Muslim rulers.[15] The operation's name, Gibraltar, held Islamic connotations.[16] The eighth century Umayyad conquest of Hispania launched from Gibraltar, a situation like that Pakistan envisaged for Indian Kashmir, i.e., conquest of Kashmir from Operation Gibraltar. They chose areas based on the Cease Fire line as well as in the populous Kashmir Valley.

The plan had multi-pronged attack. Infiltrators would mingle with the local populace and incite them to rebellion. Meanwhile guerrilla warfare would commence, destroying bridges, tunnels and highways, harassing enemy communications, logistic installations and headquarters as well as attacking airfields,[17] with a view to create the conditions of an "armed insurrection" in Kashmir—leading to a national uprising against Indian rule. Pakistan assumed that India would neither counter-attack,[18] nor involve itself in another full-scale war, and the liberation of Kashmir would rapidly follow. 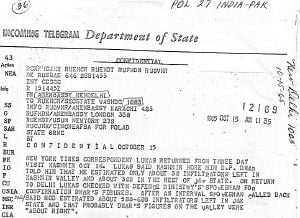 A declassified US State Department telegram that confirms the existence of hundreds of infiltrators in the Indian state of Jammu and Kashmir.

Despite such a well-planned operation, Indian forces in Kashmir detected the intruders. With the exception of four districts which revolted, the local Kashmiris proved unexpectedly uncooperative. They conveyed news of the planned insurgency to the local authorities and turned in the infiltrators. The Mujahids fruitlessly attempted to artificially create a sense of revolt by indulging in arson, murder, rape and robbery.[19] The Gibraltar Force quickly faced attacks from the Indian Army that moved in immediately to secure the border. The Indian troops captured the majority of the infiltrators, although some managed to escape. India accused the Pakistani government of sending and aiding the seditionists, and although Pakistan denied any complicity,[20][21] the Pakistani origin of all the foeigners muted that contention. Several of them proved to be officers in the Pakistan Army, with the UNMOGIP Chief, General Nimmo also confirming Pakistan's involvement.[22] 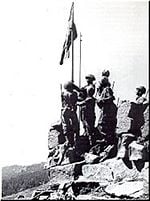 Indian soldiers hoisting the national flag atop a peak in the Haji Pir pass, which was captured soon after the infiltrators were discovered.

India swiftly launched counter attacks across the cease fire line, attacking the Pakistan divisions in Azad Kashmir that had provided cover for the infiltrators. As a result, many of those posts fell to Indian attacks resulting in minor territorial gains for India. On August 15, India scored a major victory after a prolonged artillery barrage. Their success in countering Pakistani plans proved a morale booster for Indian troops, coming exactly on India's independence day. Fighting continued until the end of the month, as vital pockets like Haji Pir pass—the logistical supply route of the infiltrators[23]—and other nearby areas came under Indian control.

The Indian offensive resulted in panic among Pakistan troops, who urgently launched Operation Grand Slam to contain the situation since the lacked a contingency planned in case of Gibraltar's failure. Operation Grand Slam resulted in more problems for Pakistan, as India countered by crossing the international border further south in the Punjab, starting the war of 1965.

While the covert infiltration proved a complete failure that ultimately led to the Second Kashmir War, military analysts have differed on whether the plan itself had flaws. Some have consider the plan well-conceived but poorly executed. Almost all Pakistani and neutral analysts have maintained that the entire operation embodied "a clumsy attempt"[24] and doomed to collapse from the beginning. According to then Chief of the Pakistan Air Force, Air Marshal Nur Khan, little coordination amongst the military services on the impending operation existed.[25] Pakistani author Pervaiz Iqbal Cheema notes that Musa Khan, Pakistan's Chief of the Army Staff, was reportedly so confident that the plan would succeed and conflict would be localized to Kashmir that he neglected to inform the Air Force, as he believed the operation would conclude victoriously without major air action. Many senior Pakistani military officers and political leaders lacked intelligence of the impending crisis, thus surprising not only India, but also Pakistan itself. Furthermore, few people in Kashmir had real interest in revolting against India, a fact largely ignored while planning.[26]

Colonel SG Mehdi, the SSG commander, cited the above reasons as well as a few others (such as logistical problems and a confusion of classic guerrilla operations with commando raids) for the operations predictable failure. He also added that many SSG officers felt unsure of the means and uncertain of the end.[27] Initially, Pakistan's Chief of Army Staff Musa Khan opposed Gibraltar on the grounds that if the operation failed, then Pakistan would lose to India in the ensuing war. Many senior officials also stood against the plan, as a failure could lead to an all-out war with India, which many wanted to avoid. The resulting war of 1965 had a greater negative impact on Pakistan than on India.[28][29][30]