The Nātya Shastra (Nātyaśāstra नाट्य शास्त्र) of Bharata is the principal work of dramatic theory, encompassing dance and music, in classical India. It is attributed to the muni (sage) Bharata and is believed to have been written during the period between 200 B.C.E. and 200 C.E. The Natya Shastra is the outcome of several centuries of theatrical practice by hereditary actors, who passed their tradition orally from generation to generation. It is in the form of a loose dialog between Bharata and a number of munis who approach him, asking about nāṭyaveda (lit. nāṭya= drama, performance; veda= knowledge).

The ‘‘Natya Shastra’’ discusses a wide range of topics, from issues of literary construction, to the structure of the stage or mandapa, to a detailed analysis of musical scales and movements (murchhanas), to an analysis of dance forms that considers several categories of body movements and their effect on the viewer. The ‘‘Natya Shastra’’ posits that drama originated because of the conflicts that arose in society when the world declined from the Golden Age (Kŗta Yuga) of harmony, and therefore a drama always represents a conflict and its resolution. Bharata’s theory of drama refers to bhavas, the imitations of emotions that the actors perform, and the rasas (emotional responses) that they inspire in the audience. The eight basic bhavas (emotions) are: love, humor, energy, anger, fear, grief, disgust and astonishment. In observing and imagining these emotions, the audience experiences eight principal responses, or rasas: love, pity, anger, disgust, heroism, awe, terror and comedy. The text contains a set of precepts on the writing and performance of dance, music and theater, and while it primarily deals with stagecraft, it has influenced Indian music, dance, sculpture, painting and literature as well. Thus, the Natya Shastra is considered the foundation of the fine arts in India.

The document is difficult to date and Bharata's historicity has also been doubted, some authors suggesting that it may be the work of several persons. However, Kapila Vatsyayan, a leading scholar of Indian classical dance, has argued that based on the unity of the text, and the many instances of coherent references to later chapters in the earlier text, the composition is likely that of a single person. Whether his Bharata was the author’s actual name is open to question;[1] near the end of the text we have the verse: "Since he alone is the leader of the performance, taking on many roles, he is called Bharata" (35.91),[2] indicating that Bharata may be a generic name. It has been suggested that Bharata is an acronym for the three syllables: bha for bhāva (mood), rā for rāga (melodic framework), and ta for tāla (rhythm). However, in traditional usage, Bharata has been iconified as a muni or sage, and the work is strongly associated with this personage.

Since nothing is known about Bharata, any arguments regarding date of the Natya Shastra are based solely on the text. It has been argued that the text predates several sections of the Ramayana, since the music terminology used in them by Valmiki follows Bharata's outlines. From similar evidence, it is clearly later than some of the Purana and Brahmana texts. These arguments, and others, have led to the opinion that the date may lie somewhere between 200 B.C.E. and 200 C.E.[2][3][4] Though earlier and later dates are often postulated, this appears to be the "broad consensus."[1]

Written in Sanskrit, the text consists of 6,000 sutras, or verse stanzas, organized in 35 or 36 chapters. Some passages that are composed in a prose form.

The title, ‘‘Natya Shastra’’, can be loosely translated as A compendium of Theater or a A Manual of Dramatic Arts. Nātya, or nāṭaka means “dramatic arts.” In contemporary usage, this word does not include dance or music, but etymologically the root naṭ refers to "dance." The ‘‘Natya Shastra’’ is the outcome of several centuries of theatrical practice by hereditary actors, who passed their tradition orally from generation to generation.[5]

The text is in the form of a loose dialog between Bharata and a number of munis who approach him, asking about nāṭyaveda (lit. nāṭya=drama,performance; veda=knowledge). The answer to this question comprises the rest of the book. Bharata testifies that all this knowledge is due to Brahma. At one point, he mentions that he has a hundred "sons" who will spread this knowledge, which suggests that Bharata may have had a number of disciples whom he trained.

The creation by Brahma of natyaveda is associated with an egalitarian myth about a fifth veda; since the four vedas, also created by Brahma, were not to be studied by women and lower castes, he created this fifth veda, the art of drama, to be practiced by everyone.[6] 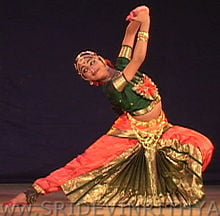 Classical Indian dance: the inheritor of the ‘‘Natya Shastra’’

The Natya Shastra discusses a wide range of topics, from issues of literary construction, to the structure of the stage or mandapa, to a detailed analysis of musical scales and movements (murchhanas), to an analysis of dance forms that considers several categories of body movements, and their effect on the viewer.

Bharata describes fifteen types of drama, composed of from one to ten acts. Full-scale plays of five or more acts are classified as either history or fiction. The ‘‘Natya Shastra’’ describes eight types of shorter plays, from one to four acts: heroic, tragic or comic plays, together with the satirical monologue; the street play; and three kinds of archaic plays about gods and demons. There is also a secondary four-act “light play,” a fictitious, sensitive comedy about a real character.[7] The principles for stage design are laid down in some detail. Individual chapters deal with aspects such as makeup, costume, acting, and directing. A large section deals with how the meanings conveyed by the performance (bhavas) can be particularly emphasized, leading to a broad theory of aesthetics (rasas).

Four aspects of abhinaya (acting, or histrionics) are described: the messages conveyed by motions of parts of the body (angika); speech (vAchika); costumes and makeup (AhArya); and on the highest level, by means of internal emotions, expressed through minute movements of the lips, eyebrows, ear, and so on(sAttvika).[6]

The ‘‘Natya Shastra’’ claims that drama originated because of the conflicts that arose in society when the world declined from the Golden Age (Kŗta Yuga) of harmony, and therefore a drama always represents a conflict and its resolution. The conversion of a story into a dramatic plot is based on the single main element which ends the conflict, elaborated in its elements and conjunctions. Each full-scale play embodies five “conjunctions:” opening, re-opening, embryo, obstacle, and conclusion. Each of these “conjunctions” is filled out with up to a dozen dramatic incidents and situations which show the characters in action. A large number of dramatic devices are available to express the causes and effects of emotion.[7] 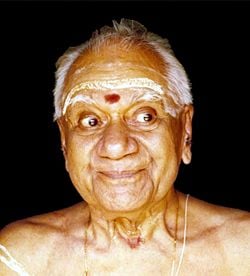 The Nātyashāstra delineates a detailed theory of drama comparable to the Poetics of Aristotle. The purpose of drama is to entertain the audience. The joy (harşa) and solace experienced by the audience is induced very deliberately by the actors through special acting techniques.[7]

Bharata refers to bhavas, the imitations of emotions that the actors perform, and the rasas (emotional responses) that they inspire in the audience. The eight basic bhavas (emotions) are: love, humor, energy, anger, fear, grief, disgust and astonishment. These are not conveyed directly to the audiences, but are portrayed through their causes and effects. In observing and imagining these emotions, the audience experiences eight principal responses, or rasas: love, pity, anger, disgust, heroism, awe, terror and comedy. Bharata recommends that plays should mix different rasas but be dominated by one. The audience essentially enjoys the play, but is also instructed by observing both good and bad actions, and the motivations which inspire them.

Dancing is closely related to drama, and like drama, is a portrayal of the eight emotions. Drama employs chiefly words and gestures; dance employs music and gestures. The ‘‘Natya Shastra’’ classifies thirteen positions of the head, thirty-six of the eyes, nine of the neck, thirty-seven of the hand, and ten of the body. Modern Indian dancers still dance according to the rules set forth in the ‘‘Natya Shastra.’’[8]

Group dances or individual dances could be introduced into a drama whenever appropriate. The lasya, a solo dance invented by Parvati, represented a story, or part of a story, within a drama.

After the Samaveda that dealt with ritual utterances of the Vedas, the ‘‘Natya Shastra’’ is the first major text that deals with music at length. It is considered the defining treatise of Indian Classical Music until the thirteenth century, when the stream bifurcated into Hindustani classical music in North India and Pakistan, and Carnatic classical music in South India.

While much of the discussion of music in the ‘‘Natya Shastra’’ focuses on musical instruments, it also emphasizes several theoretical aspects that remained fundamental to Indian music:

1. Establishment of Shadja as the first, defining note of the scale or grama. The word Shadja (षड्ज) means 'giving birth to six', and refers to the fact that once this note (often referred to as "sa" and notated S) is fixed, the placement of other notes in the scale is determined.

a. The first principle states that there exists a fundamental note in the musical scale which is Avinashi (अविनाशी) and Avilopi (अविलोपी) that is, the note is ever-present and unchanging.

3. The ‘‘Natya Shastra’’ also suggest the notion of musical modes or jatis, which are the origin of the concept of the modern melodic structures known as ragas. Their role in invoking emotions is emphasized; compositions emphasizing the notes gandhara or rishabha are said to be related to tragedy (karuna rasa), and rishabha is to be emphasized for evoking heroism (vIra rasa). Jatis are elaborated in greater detail in the text Dattilam, composed around the same time as the ‘‘Natya Shastra.’’

The ‘‘Natya Shastra’’ discusses several aspects of musical performance, particularly its application to vocal, instrumental and orchestral compositions. It also deals with the rasas and bhavas that may be evoked by music.

‘‘Natya Shastra’’ remained an important text in the fine arts for many centuries, and defined much of the terminology and structure of Indian classical music and Indian classical dance. Many commentaries have expanded the scope of the ‘‘Natya Shastra,’’ including Matanga's Brihaddesi (fifth to seventh century); Abhinavagupta's Abhinavabharati (which unifies some of the divergent structures that had emerged in the intervening years, and outlines a theory of artistic analysis); and Sharngadeva's Sangita Ratnakara (thirteen-century work that unifies the raga structure in music). The analysis of body forms and movements also influenced sculpture and the other arts in subsequent centuries.[1] The structures of music outlined in the ‘‘Natya Shastra’’ retain their influence even today, as seen in the seminal work Hindustani Sangeetha Padhathi,[9] by Vishnu Narayan Bhatkhande, written in the early twentieth century.

Retrieved from https://www.newworldencyclopedia.org/p/index.php?title=Natya_Shastra&oldid=985941
Categories:
Hidden category:
This page was last edited on 23 December 2014, at 20:58.
Content is available under Creative Commons Attribution/Share-Alike License; additional terms may apply. See Terms of Use for details.