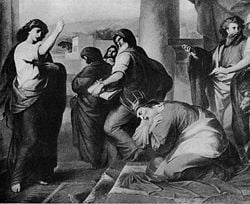 Nathan was a tenth century B.C.E. Israelite prophet who lived in the time of King David. His actions are described in the Books of Samuel, Kings, and Chronicles (see especially, 2 Samuel 7:2-17, 12:1-25). Although only a few stories of Nathan's ministry have been preserved in the Bible, he is nevertheless a very important figure, especially because of his prophetic role as a counterbalance to the otherwise absolute rule of King David, and his decisive actions in favor of the future King Solomon.

According to the Bible, it is through Nathan that God first delivered the Messianic promise of an eternal kingdom based on David's lineal descendants. Nathan also reportedly wrote histories of the reigns of both David and Solomon (see 1 Chronicles 29:29 and 2 Chronicles 9:29). However, these works were either lost or have been partly incorporated into other Biblical books such as 2 Samuel and 1 and 2 Kings. Nathan also may have had a significant role in both building the Temple of Jerusalem and in formulating its liturgical traditions. Nathan reportedly left instructions regarding the musical tradition of the Temple (see 2 Chronicles 29:25) after its construction by Solomon.

Nathan and the Temple

The Bible gives no indication concerning Nathan's early life. He appears suddenly in the narrative as King David plans to build a "house" or temple for Yahweh (2 Samuel 7). "Here I am, living in a palace of cedar," says David, "while the ark of God remains in a tent." Nathan initially approves of David's plan but soon returns to announce that God has decided against the idea. He delivers the following message to David from God:

When your days are over and you rest with your fathers, I will raise up your offspring to succeed you, who will come from your own body, and I will establish his kingdom. He is the one who will build a house for my Name, and I will establish the throne of his kingdom forever. I will be his father, and he will be my son. When he does wrong, I will punish him with the rod of men, with floggings inflicted by men. But my love will never be taken away from him, as I took it away from Saul, whom I removed from before you. Your house and your kingdom will endure forever before me; your throne will be established forever. (2 Sam. 7:12-16)

The passage is significant for several reasons:

In the Book of Samuel, Nathan begins with God's statement that God does not live in houses, but prefers the wide-open spaces or a mobile tabernacle such as the one carried by the Israelites through the wilderness. However, now that Israel has settled down and formed a nation, God will allow one of David's sons to build the Temple. The story is repeated verbatim in 1 Chron. 17, and in 1 Chron. 28:2-3 David himself gives a more specific reason why God did not allow him to build the Temple:

I had it in my heart to build a house as a place of rest for the ark of the covenant of the Lord, for the footstool of our God, and I made plans to build it. But God said to me, "You are not to build a house for my Name, because you are a warrior and have shed blood."

Nathan delivered the prophecy that it would be Solomon's destiny to build the Temple and thus played an important role in blocking David's plan to construct the Temple. Given his pivotal role in bringing Solomon to the throne, as well as his instructions regarding the musical tradition of the Temple, it is plausible that Nathan also had a major role in guiding the Temple's construction and liturgical practice. 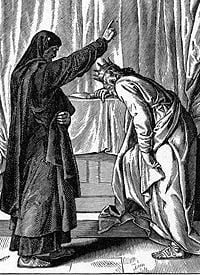 The prophet Nathan rebukes King David for his adultery with Bathsheba. (2 Sam. 12)

Nathan's next appearance, described in 2 Sam. 12, is certainly one of the most dramatic confrontations between a king and a prophet in the entire Bible. King David has committed adultery with the beautiful Bathsheba, wife of the military commander Uriah the Hittite. She becomes pregnant as a result, and David purposefully orders her husband to take an unprotected position on the battlefield, where he is killed. God then sends Nathan to deliver a parable to David.

Nathan tells the king a story of a rich man who has outrageously slaughtered the pet lamb of his poor fellow townsman in a hypocritical display of hospitality for a traveler. When David becomes enraged at the rich man's unrighteousness and declares that he deserves to die, Nathan declares, "You are the man!"

David deeply repents, but the child he has conceived with Bathsheba dies. Although Nathan does not appear again until much later, it is clear that God has accepted David's offerings of prayer and fasting in atonement, for when Nathan does appear, it is in support of David and Bathsheba's son, Solomon.

One might expect that Nathan would oppose the succession of a son resulting from the sinful union he so harshly condemned, but instead he does the opposite. Second Sam. 12:24 gives the following explanation, "The Lord loved [Solomon]." Nathan adopted the Lord's attitude toward the child, even though David and Bathsheba apparently did not accept God's instruction through Nathan to call him "Jedediah."

The First Book of Kings (first chapter) takes up the story much later, when David is an old man near death and Solomon is a teenager. David's oldest surviving son, Adonijah, decides to reign in David's stead, supported by David's top general, Joab, and the important priest Abiathar. To inaugurate his kingship, Adonijah calls a sacrificial feast at which Abiathar officiates and many of the royal family participate. However, a rival priest, Zadok, together with Nathan and several military leaders, do not join in festivities. Instead, Nathan comes to Bathsheba and reports the incident, saying: "Have you not heard that Adonijah, the son of Haggith, has become king without our lord David's knowing it?"

Nathan and Bathsheba then conspire to bring the news to David in a way most advantageous to Bathsheba's son, Solomon. David fulfills a previously unreported promise to Bathsheba to support her son's succession. He orders that Solomon immediately be anointed and installed as his official successor. He instructs Nathan and Zadok to do the anointing, although it may be noteworthy that only Zadok, the priest, is described as carrying out this significant act.

Nathan himself does not make any further appearances in the narrative. However, in describing the governmental appointments made by Solomon, it seems that Nathan's descendants were well rewarded for their father's loyalty. After describing appointments made to the sons of other key figures who foiled Adonijah's plot, 1 Kings 4:5 states: "Azariah son of Nathan—in charge of the district officers; Zabud son of Nathan—a priest and personal adviser to the king." However, the passage does not specifically identify this Nathan as Nathan the Prophet. Some believe it could be another person, such as Nathan the son of David.

King Hezekiah—who lived about three centuries after this—reportedly followed instructions left by Nathan regarding the role of Levite musicians in the Temple: "He stationed the Levites in the temple of the Lord with cymbals, harps and lyres in the way prescribed by David and Gad the king's seer and Nathan the prophet." (2 Chron. 29:25)

Later Jewish tradition as recorded in the Talmud is nearly silent concerning Nathan. The apocryphal "Lives of the Prophets" (1st–2nd c. C.E.), however, gives some additional information. According to this tradition, Nathan was the one who taught King David the Law. It also says that Nathan foresaw David's sin with Bathsheba, but was prevented from intervening by the devil, who caused the naked body of a murdered man to be placed in Nathan's road, forcing him to attend to this duty first. It further states that Nathan lived to an old age and was buried in his own land. It also adds the biographical detail that Nathan was a Hivite, which would make him a pious foreigner rather than a lineal descendant of Jacob. (See Josh. 9:7-10; 11:19)

A "Book of Nathan the Prophet" is mentioned twice by the author of Chronicles.

Second Chronicles 9:29 reads: "Now the rest of the acts of Solomon, first and last, are they not written in the book of Nathan the prophet, and in the prophecy of Ahijah the Shilonite, and in the visions of Iddo the seer against Jeroboam the son of Nebat?"

Some commentators believe that portions of the "Book of Nathan" may have been included at some point in either the books of Samuel or Kings, or both. Nathan's confrontations with King David concerning the Temple and the Bathsheba affair are obvious candidates as parts of the "Book of Nathan." It is also notable that the Bathsheba incident is hardly mentioned in Chronicles. Some also speculate that the books of Samuel the Prophet, the Book of Nathan the Prophet, and the book of Gad the Seer were combined into what are now 1st and 2nd Samuel.

The fact that books existed under these names, however, does not necessarily mean that the books were written by those attributed to them. Biblical books are often pseudonymous, attributed to certain authors by people of a much later period. Israeli archaeologist Israel Finkelstein claims that writing was not yet prevalent in ancient Israel during the time of King David, and thus it is doubtful that either the Book of Samuel or the supposed Book of Nathan could have been written in that time. However, another expert in ancient Hebrew literature, David Rosenberg, takes the opposite view, claiming that the court of King David was in direct contact with other capitals of the Levant and was likely to have included a number of scribes and royal historians.