The Nag Hammadi library is a collection of early Christian gnostic texts discovered near the Egyptian town of Nag Hammadi in 1945. Contained in 13 leather-bound papyrus books, or "codices," buried in a sealed jar, the find is considered the most important archaeological discovery in the modern period relating to the history of early Christianity.

The Nag Hammadi writings comprise 52 mostly gnostic gospels, apocalypses, and esoteric treatises. They also include three monastic works belonging to the Corpus Hermeticum and a partial translation of Plato's Republic. The codices are believed to be a "library," or collection, hidden by monks from the nearby monastery of Saint Pachomius after the possession of such banned writings became a serious offense. The zeal of the powerful fourth-century bishop Patriarch Athanasius of Alexandria in suppressing heretical writings is likely to have motivated the hiding of such dangerous literature. Another factor may have been the Theodosian decrees of the 390s, which significantly strengthened the legal authority of orthodoxy.

Because of the success of the mainstream church in destroying heretical works, many of the books discovered at Nag Hammadi had previously been known only by references to them in the works of orthodox writers, who condemned them. The most well-known of these works is the Gospel of Thomas, of which the Nag Hammadi codices contain the only complete text. It is considered by many scholars to be quite early, only semi-gnostic in character, and was apparently widely read in certain Christian communities. Another Nag Hammadi book—the Gospel of Philip—figured prominently in the popular novel and movie The DaVinci Code because of its teaching of a special relationship between Jesus and Mary Magdalene.

The codices are written in Coptic, although the individual works are probably all translations from Greek. Scholars generally propose a second-century composition date for most of the lost Greek originals. The manuscripts themselves date from the third and fourth centuries. The Nag Hammadi codices are housed in the Coptic Museum in Cairo.

The significance of the Nag Hammadi discovery for students of early Christianity and Gnosticism can hardly be exaggerated. Prior to this discovery, relatively few gnostic works had survived, many in fragmentary form. Nag Hammadi produced a treasure trove of Gnostic volumes, many of them in relatively good condition. Their translation and current widespread availability have brought an entire corpus of previously suppressed spiritual literature to the reading public.

While many of the Nag Hammadi books are highly esoteric in nature, some are very accessible to the everyday reader. The Gospel of Thomas, for example, is a simple collection of the purported sayings of Jesus. Many of these sayings are duplicated in the orthodox gospels, but some have a notably esoteric or mystical character. For example, in verse 22, Jesus says: 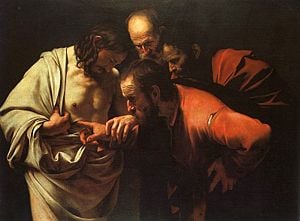 Caravaggio's "The Incredulity of St. Thomas"

Thomas himself, who is known to the orthodox Christian world as "Doubting Thomas" for his skepticism concerning Jesus' physical resurrection, is exalted as the one disciple who truly understood the special knowledge imparted by Christ. Scholars such as Elaine Pagels and others have concluded that the reason for Thomas' denigration in the orthodox gospels is that he had become a central figure for those Christians who stressed the teachings of Jesus rather than sacraments of the church and the doctrine of the Resurrection, which is not mentioned in Thomas' gospel. Jesus, in this gospel, is not the savior, but the teacher of secret knowledge.

Other Nag Hammadi writings give additional insights into the nature of second-century Gnostic Christianity, its beliefs and traditions, as well as its struggle with the orthodox church. The Gospel of Truth describes a Gnostic account of creation and the origin of evil through the fall of Sophia (wisdom). It presents Jesus as having been sent by God to remove human ignorance. The Gospel of Philip presents Mary Magdalene as the enlightened disciple who was most beloved of Jesus, fueling speculation that she may have been his wife. The Apocryphon of John and other similar works describe Jesus reappearing and giving secret knowledge to the apostles after having spiritually ascended to heaven. Common themes in the Nag Hammadi literature include an emphasis on spirit vs. matter, the idea of the Divine Feminine, the ultimate unity of self-knowledge and knowledge of the divine, the attainability of Christhood to all who attain gnosis, the illusory nature of the material world, and various arcane details of creation, angelology, etc.

The Nag Hammadi writings have been classified[1] as follows:

The Divine Feminine: The Thunder, Perfect Mind; The Thought of Norea; The Sophia of Jesus Christ; The Exegesis on the Soul.

Creation and Redemption: The Apocryphon of John; The Hypostasis of the Archons; On the Origin of the World; The Apocalypse of Adam; The Paraphrase of Shem.

The Nature of Reality, the Soul, etc.: The Gospel of Truth; The Treatise on the Resurrection; The Tripartite Tractate; Eugnostos the Blessed; The Second Treatise of the Great Seth; The Teachings of Silvanus; The Testimony of Truth.

Liturgical and Initiatory Texts: The Discourse on the Eighth and Ninth; The Prayer of Thanksgiving; A Valentinian Exposition; The Three Steles of Seth; The Prayer of the Apostle Paul. (Also The Gospel of Philip.) 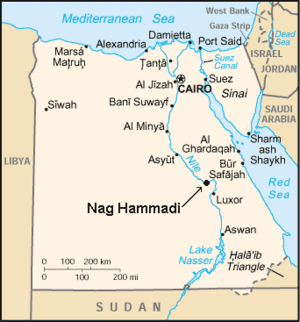 What came to be known as the Nag Hammadi library (owing to the proximity of the find to Nag Hammadi, the nearest major settlement) appeared only gradually, and its significance went unacknowledged for several years after its discovery. In December 1945, two Egyptian brothers found several papyri in a large earthernware vessel while digging for fertilizer around limestone caves near present-day Habra Dom in Upper Egypt. The find was not initially reported, as the brothers sought to make money from the manuscripts by selling them individually at intervals. Their mother also reportedly burned several of the manuscripts, because she was worried that the papers might have dangerous effects.

In 1946, the brothers left the manuscripts with a Coptic priest, whose brother-in-law sold one codex to the Coptic Museum in Old Cairo (this tract is today numbered Codex III in the collection). The resident Coptologist and religious historian, Jean Dorese, realizing the significance of the artifact, published the first reference to it in 1948. Over the years, most of the tracts were passed by the priest to a Cypriot antiquities dealer in Cairo. They were then obtained by the Egyptian Department of Antiquities. After the Nasser revolution of 1956, these texts were obtained by the Coptic Museum in Cairo and declared national property.

Meanwhile, a single codex had been sold in Cairo to a Belgian dealer. After an attempt was made to sell the codex in both New York and Paris, it was acquired by the Carl Gustav Jung Institute in Zurich in 1951. There it was intended as a birthday present to the famous psychologist; for this reason, this codex is typically known as the Jung Codex. It is Codex I in the current collection.

Jung's death in 1961 caused a quarrel over the ownership of the codex, and the artifact was not given to the Coptic Museum in Cairo until 1975, after a first edition of the text had been published. In this way the papyri were finally brought together in Cairo. Of the original 1945 find, eleven complete books and fragments of two others, amounting to well over 1,000 written pages, are preserved there.

A partial translation of the Jung Codex appeared in Cairo in 1956, together with the publication of a facsimile edition of the codex itself. Due to the difficult political circumstances in Egypt, individual tracts followed from the Cairo and Zurich collections only slowly.

This state of affairs changed in 1966, with the holding of the Messina Congress in Italy. At this conference, intended to allow scholars to arrive at a consensus concerning the definition of Gnosticism, James M. Robinson assembled a group of editors and translators whose express task was to publish a bilingual edition of the Nag Hammadi codices in English, in collaboration with the Institute for Antiquity and Christianity in Claremont, California. Robinson had previously been elected secretary of the International Committee for the Nag Hammadi Codices, which had been formed in 1970 by UNESCO and the Egyptian Ministry of Culture; it was in this capacity that he oversaw the project. A facsimile edition in twelve volumes appeared between 1972 and 1977, with subsequent additions in 1979 and 1984 from publisher E.J. Brill in Leiden, making the whole find available for the first time.

At the same time, in the former German Democratic Republic a group of scholars were preparing the first German translation of the find. A complete scholarly translation under the auspices of the Berlin Humboldt University was published in 2001.

The James M. Robinson translation was first published in 1977, under the name The Nag Hammadi Library in English, in a collaboration between E.J. Brill and Harper & Row. The single-volume publication, according to Robinson, "marked the end of one stage of Nag Hammadi scholarship and the beginning of another" (from the preface to the third revised edition). Paperback editions followed in 1981 and 1984. This marked the final stage in the gradual dispersal of gnostic texts into the wider public arena—the full compliment of codices was finally available in unadulterated form to people around the world, in a variety of languages.

A further English edition was published in 1987 by Harvard scholar Bentley Layton, called The Gnostic Scriptures: A New Translation with Annotations (Garden City: Doubleday & Co., 1987). The volume unified new translations from the Nag Hammadi Library with extracts from the heresiological writers, and other gnostic material. It remains, along with The Nag Hammadi Library in English, one of the more accessible volumes translating the Nag Hammadi find, with extensive historical introductions to individual gnostic groups, notes on translation, annotations to the text and the organization of tracts into clearly defined movements.

In addition, the entire corpus of the Nag Hammadi library is now available on the Internet.

Note: Translated texts and introductory material are available on the internet.[2]