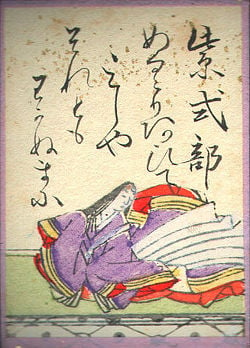 Murasaki Shikibu (c. 978, Kyoto — c. 1014 or 1031 Kyoto), Japanese novelist and lady-in-waiting in the imperial court at the height of the Heian period (795–1185), was the author of the Genji monogatari (The Tale of Genji), often regarded as the greatest work of Japanese literature. It is also thought to be the world's oldest full novel. It concerns the life of charismatic Prince Genji and his descendants, and is a subtle and thorough depiction of a complex society. Originally intended to be read aloud, the book contains 54 chapters and over 400 characters, and is twice the length of War and Peace. Despite its length, the various story lines in the novel are remarkably consistent, following the amorous involvements and the court intrigues surrounding Prince Genji, and ending with a gloomy psychological analysis of unrequited love. Murasaki is thought to have started writing the novel around 1003, and it may have been incomplete at her death.

The name “Lady Murasaki” refers both to the author of The Tale of Genji and to a central character in the novel.

Murasaki refers to both the heroine of the Genji Monogatari (The Tale of Genji), and the book's author, Murasaki Shikibu. In both cases the name is a pseudonym, and the real names are unknown. In court manners of the Heian Period, it was considered disrespectful and unacceptably familiar to address people by their personal names. Throughout the Tale of Genji, characters are often designated by the color of the robes they wear, rather than by their personal names.

The real name of the author of The Tale of Genji is unknown, so she is referred to by the nickname which she gave to the heroine she invented. The fictional character of Murasaki was the daughter of Prince Hyobu, and was taken at a young age from relative obscurity in the countryside to live with Hikaru Genji, the main character of the novel. The name was inspired by a poem Genji composed when contemplating his first meeting with her. Later in life Murasaki was tormented by the malevolent and jealous spirit of Genji's former lover, Lady Rokujo. In the novel, Murasaki raised the Empress Akashi. During the later part of her life, Murasaki decided to become a nun, but Genji never allowed this wish to be fulfilled.

Murasaki (紫) is the Japanese word for the color purple. Other translations include Lavender, as used by E. Seidensticker in his English version of the Genji Monogatari; Violet; and Violet Root, which in Japanese poetry denotes constancy. In his poem, Genji names the murasaki or violet flower, because its color resembles that of wisteria, or Japanese fuji, a reference to Fujitsubo, "the Lady of the Wisteria Court," a woman with whom he is passionately in love for the first part of the novel. Fujitsubo is Murasaki's aunt. In a play on words characteristic of Japanese poetry, the similarity between the two colors leads to the name Murasaki.

The author Murasaki was a lady-in-waiting to the Empress Shoshi (a daughter of the powerful Fujiwara Michinaga). She was a literary contemporary and rival of Sei Shonagon. The exact dates of Lady Murasaki’s life are unknown, as is her real name. “Shikubu” may have been a reference to her father, who served in the Ministry of Ceremonies, or “Rites” (Shikibu Sh). The name Murasaki, literally “Violet,” could have been a reference to the heroine in the Tale of Genji, or to the first element of her maiden name, “Fujiwara.” 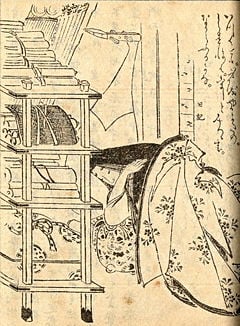 Murasaki was born into a lesser branch of the Fujiwara family during the last quarter of the tenth century. Her great-grandfather had been a poet and her father, Fujiwara Tamatoki, a scholar and a poet himself, later became a provincial governor. As a child, she was intelligent and learned more quickly than her brother, causing her father to lament, "If only you were a boy, how happy I should be!" He allowed Murasaki Shikibu to study with her brother, and to learn some Chinese and Buddhist classics, which were considered improper for females at the time.

When she was in her early twenties, Lady Murasaki was married to a distant relative. Her only daughter was born in 999, and in 1001, her husband died. In 1004, Murasaki’s father became governor of the province of Echizen, about 80 miles from the capital. The imperial family, hearing of her talent for writing and her intellectual capacity, brought Lady Murasaki to court, and arranged for her to become a lady-in-waiting to Akiko (Empress Shoshi), the young consort of Emperor Ichijo. In 1008, Murasaki began writing a diary about her life at court, which she continued for two years. When Emperor Ichijo died in 1011, the Empress Shoshi went into retirement together with her ladies-in-waiting. Around this time, Murasaki’s father was appointed governor of the province of Echigo; in 1016 he retired and entered a monastery.

Almost nothing is known about Lady Murasaki’s later life. She may have retired from court and entered a convent around the age of 50. Her writings suggest that towards the end of her life she was sensitive to the approaching political changes which would permanently affect her privileged lifestyle. Murasaki is thought to have died around 1031.

The Tale of Genji

For two years, while she was living at the imperial court, Lady Murasaki kept a personal diary which not only gives a vivid account of life at court, but allows insights into Lady Murasaki’s thoughts. She was critical of the frivolity of court life. Once, describing preparations for a painting competition, she commented that there was a "moment in the history of our country when the whole energy of the nation seemed to be concentrated upon the search for the prettiest method of mounting paper scrolls!" She was careful to hide her knowledge of Chinese, fearing that she might be criticized for being unladylike. She also exhibited a considerable knowledge of the world and the politics of the time.

Though Murasaki Shikibu may have begun The Tale of Genji around 1003, before she arrived at the imperial court, much of it was written at court and appears to be loosely modeled on her own experiences as a lady-in-waiting to the Empress Akiko. She was a keen observer of the daily activities and attitudes of upper-class society. The Tale of Genji is a long novel about the complicated life of Genji, a fictitious prince, and may have been unfinished at the time of her death.

The tale of Prince Genji, known as "the Shining Prince," was intended to be read aloud, possibly as entertainment for the ladies at court. It became popular from the moment of its release. The original Genji manuscript was lost, but Genji manuscript scrolls from the twelfth century have survived, and for eight centuries the novel has been translated into many languages and studied and discussed by countless scholars.

The Tale of Genji is divided into 54 books or episodes, and is twice as long as War and Peace. The action of the story, which includes over 400 different characters and takes place over four generations, is remarkably consistent despite its complexity. The central character, Hikaru Genji, the Shining One, pursues love and happiness, always haunted by the image of his mother, Kiritsubo, the consort of an emperor, whose early death saddens Genji's youth. Genji rises to a position of importance at court, indulges in a series of amorous encounters, and wins the admiration of his peers when he dances the "Waves of the Blue Sea."

The character of Genji may be based in part on Fujiwara Korechika (975-1010), a nephew of a distant relative of Lady Murasaki, Fujiwara Michinaga (966-1027). Genji’s numerous love affairs arouse the jealousy and wrath of powerful rivals who bring about his disgrace and exile. After a short time, however, Genji is pardoned, and recalled to the capital, where he regains his prominence. During his exile, Genji encounters the girl Murasaki Ue, and undertakes to educate her and mold her into a perfect wife. He builds a sumptuous villa in the capital to accommodate his several wives, and installs Murasaki in the place of honor. Genji’s love for Murasaki is compromised by an excess of passion, and he suffers extreme unhappiness as a consequence. Murasaki, his favorite wife, dies childless, and Genji enters a world of memories.

Soon afterward, Genji himself dies, and the story turns to his supposed son, Kaoru and his grandson, Niou, who compete for the love of a young woman named Ukifune. Since most of the action in this portion of the novel is set in the small village of Uji, it is referred to as the “Uji Chapters.” Confused by her emotions, Ukifune unsuccessfully attempts suicide, and then retires to a convent to live out her life as a nun. The novel which began as an enchanting fairytale ends in a gloomy and complex psychological analysis of unrequited love.