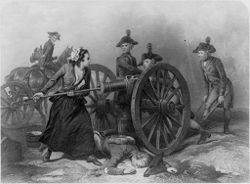 “Molly Pitcher” depicted in an 1859 engraving

"Molly Pitcher" was a nickname given to a woman who may have fought briefly in the American Revolutionary War. The name itself may have originated as a nickname given to women who carried water to men on the battlefield during the war. Molly Pitcher's fame began two years after the signing of the Declaration of Independence by the American Colonies. The fight for independence was beginning to take a favorable turn toward the Colonials and due to the success at the Battle of Monmouth only in the northern colonies.

Molly Pitcher is generally identified as the Irish immigrant woman Mary Hayes McCauley (or Mary Ludwig Hays, who supposedly married John Casper Hays before she married William Hayes).[1] Biographical information about her, including her actual name and year of birth (1753 is suggested as an approximate birth year[1]) is sparse, and her original surname is unknown. According to one version of the story, she was born to a German family in New Jersey. Ludwig's father was John George Ludwig, a dairy farmer with a farm near Trenton, New Jersey.

She lived with her parents and worked on the farm until she was fifteen years old, at which time Molly's father found her a job with a doctor's family. Taking the job required her moving to Carlisle, Pennsylvania, which was nearly one hundred miles away. Mary went to work in the home of Dr. William Irvine. She worked as a laundry woman, cook and caretaker to the doctor's children.

Solid records first appear in 1778; she attended her husband William Hayes, an artilleryman who had enlisted in a Pennsylvanian artillery unit in 1777, to the Battle of Monmouth in New Jersey on June 28, 1778.[1] Originally aiding the Colonists in the battle by carrying water, when her husband fell wounded—possibly from heat stroke—Mary took up post at his cannon.

According to the legend, after the battle, General George Washington issued her a warrant as a noncommissioned officer, and she was thereafter known by the nickname "Sergeant Molly."

Some of these details may have been borrowed from the actions of the other leading candidate for the "real" Molly Pitcher, a woman named Margaret Corbin.

Corbin was a woman who fought in the American Revolutionary War. On November 16, 1776, she and her husband, John Corbin, both from Philadelphia, along with some six hundred American soldiers, defended Fort Washington in northern Manhattan against four thousand attacking Hessian troops under British command. John and Margaret crewed one of two cannons the defenders possessed. After her husband was killed, Corbin took over until she was badly wounded herself.

A tablet commemorating her heroism was erected in 1909 in Fort Tryon Park, near the scene of the battle, and the entrance to the park is named Margaret Corbin Circle in her honor. A large art-deco mural depicting the battle scene decorates the lobby of nearby 720 Fort Washington Avenue. She lies buried in West Point Cemetery.

In 1928, "Molly Pitcher" was honored with a U.S. postage stamp. "Molly" was further honored in World War II with the naming of the Liberty ship SS Molly Pitcher, launched on December 12, 1942, and subsequently torpedoed and lost west of Lisbon, Portugal on January 30, 1943.

Raphael regards "Molly Pitcher" as a myth which serves to obscure the actual (though less dramatic) contributions of women to the war effort.

Retrieved from https://www.newworldencyclopedia.org/p/index.php?title=Molly_Pitcher&oldid=687353
Categories:
Hidden category:
This page was last edited on 4 April 2008, at 00:07.
Content is available under Creative Commons Attribution/Share-Alike License; additional terms may apply. See Terms of Use for details.