Margaret I of Denmark

Margaret Valdemarsdatter (Norwegian: Margrete Valdemarsdotter) (1353 – October 28, 1412) was Queen of Norway, Regent of Denmark and Sweden, and founder of the Kalmar Union which joined the Scandinavian countries for over a century. She died in 1412, and her grave stands behind the high altar in the Roskilde Cathedral, near Copenhagen. A bell is rung in her memory twice every day. On the other hand she spared no pains to recover lost Danish territory. She purchased the island of Gotland from its actual possessors, Albert of Mecklenburg and the Livonian Order, and the greater part of Schleswig was regained in the same way. Margaret was a prudent ruler. She was unremitting in her effort to regain lost Danish territory and used diplomacy to ensure that the Nordic Union did not become entangled in other people's war, which is why she rejected a proposed alliance with England because it would have dragged the Union into the Hundred Years' War. She ushered in an era of peace and unity in Scandinavia, a not inconsiderable legacy. The Scandinavian nations have always enjoyed close ties, and a penchant for unity may have found expression in their more recent participation in the European Union.

She is known in Denmark as "Margrete I," to distinguish her from the current queen, but she never (except for a brief period in 1375) actually styled herself Queen of Denmark. Instead, she called herself "Margrete, by the grace of God, Valdemar Daneking's daughter" and "Denmark's rightful heir" when referring to her rulership in Denmark. Others simply referred to her as the "Lady Queen" without specifying what she was queen (or female king) of, but not so Pope Boniface IX, who blatantly styled her "Queen of Denmark" or "Queen of Denmark, Norway and Sweden" in his letters.

As to Norway, she was known as Queen (queen-consort, then dowager queen) and regent. And, as to ruling Sweden, she was Dowager Queen and Plenipotentiary Ruler. When she married Haakon, in 1363, he was yet co-king of Sweden, making Margaret queen of Sweden, and despite becoming deposed, they never relinquished the title. In fact, Haakon actually held Sweden's westernmost provinces throughout his reign up to his death. Therefore, when Swedes expelled Albert I in 1389, Margaret theoretically just resumed her original position.

She was born in Vordingborg Castle, the daughter of Valdemar IV of Denmark and Helvig of Sønderjylland in 1353. She married, at the age of ten, King Haakon VI of Norway, who was the younger and only surviving son to Magnus VII of Norway, Magnus II of Sweden.

Her first act after her father's death in (1375) was to procure the election of her infant son Olaf as king of Denmark, despite the claims of the husband of her elder sister and her son (the husband was Duke Henry of Mecklenburg). Olaf died in 1387, having in 1380 also succeeded his father in Norway and in claims to Sweden; and in the following year Margaret, who had ruled both kingdoms in his name, was chosen regent of Norway and Denmark. She had already given proofs of her superior statesmanship by recovering possession of Schleswig from the Holstein counts, who had held it absolutely for a generation, and who now received it back indeed as a gift (by the compact of Nyborg 1386), but under such stringent conditions that the Danish crown got all the advantage of the arrangement. By this compact, moreover, the chronically rebellious Jutish nobility lost the support they had hitherto always found in Schleswig-Holstein, and Margaret, free from all fear of domestic sedition, could now give her undivided attention to Sweden, where the mutinous nobles were already in arms against their unpopular king, Albert of Mecklenburg.

At a conference held at Dalaborg Castle, in March 1388, the Swedes were compelled to accept all Margaret's conditions, elected her "Sovereign Lady and Ruler," and engaged to accept from her any king she chose to appoint. On February 24, 1389, Albert ("Albrecht"), who had returned from Mecklenburg with an army of mercenaries, was routed and taken prisoner at Aasle near Falköping, and Margaret was now the omnipotent mistress of three kingdoms.

Stockholm then almost entirely a German city, still held out; fear of Margaret induced both the Mecklenburg princes and the Wendish towns to hasten to its assistance; and the Baltic and the North Sea speedily swarmed with the privateers of the Victual Brothers or Vitalian Brotherhood, so called because their professed object was to revictual Stockholm. Finally the Hansa intervened, and by the compact of Lindholm (1395) Albrecht was released by Margaret on promising to pay 60,000 marks within three years, the Hansa in the meantime to hold Stockholm in pawn. Albrecht failing to pay his ransom within the stipulated time, the Hansa surrendered Stockholm to Margaret in September 1398, in exchange for commercial privileges.

It had been understood that Margaret should, at the first convenient opportunity, provide the three kingdoms with a king who was to be a kinsman of all the three old dynasties, although in Norway it was specified that she would continue ruling alongside the new king. In 1389, she proclaimed her great-nephew, Eric of Pomerania (grandson of Henry of Mecklenburg), king of Norway. In 1396, homage was rendered to him in Denmark and Sweden likewise, Margaret reserving to herself the office of regent during his minority. To weld the united kingdoms still more closely together, Margaret summoned a congress of the three Councils of the Realm to Kalmar in June 1397; and on Trinity Sunday, on June 17, Eric was solemnly crowned king of Denmark, Norway and Sweden. The proposed act of union divided the three Councils, but the actual deed embodying the terms of the union never got beyond the stage of an unratified draft. Margaret revolted at the clauses which insisted that each country should retain exclusive possession of its own laws and customs and be administered by its own dignitaries, as tending in her opinion to prevent the complete amalgamation of Scandinavia. But with her usual prudence she avoided every appearance of an open rupture. A few years after the Kalmar Union, Eric, when in his eighteenth year, was declared of age and homage was rendered to him in all his three kingdoms, but during her lifetime Margaret was the real ruler of Scandinavia. 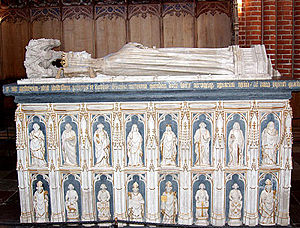 The tomb of Margaret I in Roskilde Cathedral.

So long as the union was insecure, Margaret had tolerated the presence near the throne of "good men" from all three realms (the Rigsraad, or council of state, as these councilors now began to be called); but their influence was always insignificant. In every direction the royal authority remained supreme. The offices of high constable and earl marshal were left vacant; the Danehofer or national assemblies fell into desuetude, and the great queen, an ideal despot, ruled through her court officials acting as superior clerks. But law and order were well maintained; the license of the nobility was sternly repressed; the kingdoms of Sweden and Norway were treated as integral parts of the Danish state, and national aspirations were frowned upon or checked, though Norway, as being more loyal, was treated more indulgently than Sweden.

Margaret also recovered for the Crown all the landed property which had been alienated during the troubled days before Valdemar IV. This so-called "reduktion," or land-recovery, was carried out with the utmost rigor, and hundreds of estates fell into the Crown.

Margaret also reformed the Danish currency, substituting good silver coins for the old and worthless copper tokens, to the great advantage both of herself and the state. She had always large sums of money to dispose of, and a considerable proportion of this treasure was dispensed in works of charity.

Margaret's foreign policy was sagaciously circumspect, in sharp contrast with the venturesomeness of her father's. The most tempting offer of alliance, the most favorable conjunctures, could never move her from her system of neutrality. On the other hand she spared no pains to recover lost Danish territory. She purchased the island of Gotland from its actual possessors, Albert of Mecklenburg and the Livonian Order, and the greater part of Schleswig was regained in the same way.

In 1402, Queen Margaret entered into negotiations with the King of England, Henry IV about the possibility of a double wedding alliance between England and the Nordic union. The proposal was for a double wedding, whereby King Eric would marry King Henry's daughter, Philippa, and King Henry's son, the Prince of Wales and future King Henry V would marry King Eric's sister, Catherine. The English side wanted these weddings to seal an offensive alliance between the Nordic kingdoms and England, which could have led to the involvement of the Nordic union on the English side in the ongoing Hundred Years' War against France. Queen Margaret led a consistent foreign policy of not getting entangled in binding alliances and foreign wars. She therefore rejected the English proposals. The double wedding did not come off, but Eric's wedding to Philippa was successfully negotiated. On October 26, 1406, King Eric married the 13-year-old Philippa, daughter of Henry IV of England and Mary de Bohun, at Lund. The wedding was accompanied by a purely defensive alliance with England. For Eric's sister Catherine, a wedding was arranged with John, Count Palatine of Neumarkt. Margaret thus acquired a southern German ally, who could be useful as a counterweight to the northern German princes and cities.

Margaret died suddenly on board her ship in Flensburg harbour on October 28, 1412. Her sarcophagus made by the Lübeck sculptor Johannes Junge (1423) stands behind the high altar in the Roskilde Cathedral, near Copenhagen. She had left property to the cathedral on the condition that Masses for her soul would be said regularly in the future. At the Reformation in 1536, this was discontinued; however, to this day a special bell is being rung twice daily in commemoration of the Queen.

Retrieved from https://www.newworldencyclopedia.org/p/index.php?title=Margaret_I_of_Denmark&oldid=1085954
Categories:
Hidden category:
This page was last edited on 6 November 2022, at 03:55.
Content is available under Creative Commons Attribution/Share-Alike License; additional terms may apply. See Terms of Use for details.