Majulah Singapura ("Onward Singapore") is the national anthem of Singapore. Composed by Zubir Said in 1958 as a theme song for the City Council of Singapore, the song was selected in 1959 as the island's anthem when it attained self-government. Upon full independence in 1965, "Majulah Singapura"' was formally adopted as Singapore's national anthem. By law, the anthem may only be sung with its original Malay lyrics, although authorized translations of the lyrics of the anthem exist in Singapore's three other official languages: English, Mandarin, and Tamil. Challenges to the practice of singing only in Malay have been rejected, citing the need to foster a pride in native culture after living under British rule. 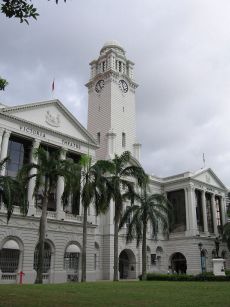 The Victoria Theatre and Concert Hall as it appeared in January 2006. Victoria Theater served as the venue for the first public performance of "Majulah Singapura" on September 6, 1958.

The composition of "Majulah Singapura" happened during a push for independence from the United Kingdom. While a British colony, Singapore's national anthem had been "God Save the King (or Queen)." In 1951, a royal charter from King George VI conferred city status on the colony. In 1958, Ong Pang Boon, the Deputy Mayor of the City Council of Singapore, approached Zubir Said (1907–1987), a score arranger and songwriter with Cathay-Keris Film Productions, to compose a theme song for the Council's official functions titled "Majulah Singapura" ("Onward Singapore"). That phrase became the motto displayed in the Victoria Theater after its renovation in 1958.[1]

Zubir took a year to finish composing the music and lyrics for the song. In a 1984 oral history interview, he recalled the process: "[T]he difficulty is in such a short melody, I have to put in all the words… [I]t must be very simple, understandable for all the races in Singapore… I consult also [sic] an author in Malay language so that I can do it in proper Malay language but not too deep and not too difficult."[2] Summing up his philosophy when composing the anthem, Zubir cited the Malay proverb "Di mana bumi dipijak, di situ langit dijunjung" ("You should hold up the sky of the land where you live").Cite error: Invalid <ref> tag; invalid names, e.g. too many

The Singapore Chamber Ensemble first performed the completed composition on September 6, 1958, during the grand finale of a concert staged in the Victoria Theater to celebrate its official reopening. In 1959, Singapore attained self-government and the City Council was dissolved. The Government felt that a national anthem was needed to unite the different races in Singapore. The Deputy Prime Minister Toh Chin Chye selected the City Council's song as it had already attained popularity. At Toh's request, Zubir modified the lyrics and melody, and the Legislative Assembly adopted the revised song on November 11, 1959. On November 30, the Singapore State Arms and Flag and National Anthem Ordinance 1959.[3] passed for the regulation of the use and display of those national emblems. "Majulah Singapura" was formally introduced to the nation on December 3, when Yusof bin Ishak was inaugurated as the Yang di-Pertuan Negara, Singapore's head of state. At the same occasion, which also marked the launch of "Loyalty Week," the national flag and the state crest were introduced. After Singapore's full independence from Malaysia on August 9, 1965, "Majulah Singapura" was formally adopted as the Republic's national anthem.

Use of the national anthem 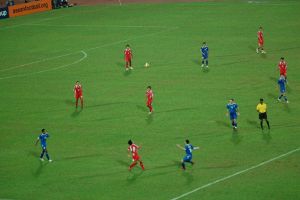 Singapore (in blue jerseys) and Thailand (red) during the first leg of the AFF Football Championship finals at the National Stadium in Singapore on January 31, 2007. Before the match started the national anthems of both countries were performed. Singapore eventually won 2–1.

Schools and armed forces camps regularly perform the national anthem at ceremonies held at the beginning and/or the end of each day, along with the raising and lowering of the national flag and the recital of the national pledge. The national anthem is played on occasions of national celebration or national significance, such as at the National Day Parade, at National Day observance ceremonies and at sporting events. In November 2004, Olivia Ong, an 18-year-old Singaporean based in Tokyo, sang "Majulah Singapura" at the 2006 FIFA World Cup Asian qualifying rounds at Saitama Stadium in Saitama, Japan.[4] Two months later, in January 2005, Singapore Idol Taufik Batisah was invited to become the first performer to sing "Majulah Singapura" at an international football game at the National Stadium in Singapore—the return leg of the Tiger Cup (now the AFF Football Championship) final between Singapore and Indonesia in Singapore. Unable to accept the invitation, singer Jai Wahab replaced him. In July 2005, Singaporean singer and actress Jacintha Abisheganaden sang the national anthem at the Esplanade—Theaters on the Bay during the opening ceremony of the 117th Session of the International Olympic Committee, where London won the privilege of hosting the 2012 Summer Olympics.

When outdoors, military personnel in uniform don their head dress and face the flag when the national flag raises or lowers with the national anthem is played. While in formation, only the commander salutes; otherwise, all service personnel salute. Service personnel indoors for a flag raising or lowering ceremony may dispense with the salute. In such cases, the persons need only stop what they are doing and stand at attention.[5]

The national anthem plays at the close of broadcasting hours on TV and radio in Singapore, although that has been used less with 24-hour TV channels and radio stations. The national anthem has lent its name to the Majulah Connection, a Singapore-based not-for-profit organization set up November 2002 to connect Singapore with overseas Singaporeans and friends of Singapore. The organization was formally established as a non-governmental organization (NGO) in January 2003.[6]

In addition, guidelines issued by the Ministry of Information, Communications and the Arts (MICA) state that either instrumental or vocal versions of the national anthem must preserve the dignity and decorum should be observed when ever performed.[7]

Interviewed by the Oral History Department in 1989, Dr. Toh Chin Chye defended the appropriateness of the national anthem in Malay: "The indigenous language of the region, as English is not native to this part of the world." He felt that the: "Malay version of the national anthem would appeal to all races… it can be easily understood. And at the same time [it] can be easily remembered… [I]t must be brief, to the point; … and can be sung".[9]

On July 22, 1991, the English daily newspaper The Straits Times reported that during a meeting between the then Prime Minister Goh Chok Tong and community leaders, a group of grassroots leaders and a lawyer had suggested that "adjustments" should be made to the national anthem. Many Singaporeans lacked the ability to sing the anthem in Malay, diminishing "strong feelings" or "strong emotions when they sing the national anthem."[10] In particular, some grassroots leaders argued that since the Chinese constitute a majority of the population, a Mandarin version of the anthem should be used.

The Prime Minister responded that he would keep the national anthem in Malay while ensuring the ready availability of translations in other mother tongues. Former Deputy Prime Minister S. Rajaratnam also criticized the proposal to change the lyrics, feeling that the simplicity of the Malay lyrics allowed anyone to sing the hymn. He also noted that the anthem had been translated into Singapore's three other official languages (English, Mandarin, and Tamil) for those unable to understand Malay.

A subsequent poll by The Straits Times found that while many Singaporeans knew what the anthem generally meant, only seven out of thirty five persons interviewed knew the meaning of each word. All but three of those interviewed agreed that the anthem should continue in Malay. The three persons who disagreed felt that the anthem should be in English as the language most commonly used in Singapore. All the interviewees, including those unable to understand the meaning of the lyrics, said they felt a sense of pride when they heard or sang the national anthem.

An abridged version of "Majulah Singapura" had been used officially since 1965, although an expanded version, used only at grand ceremonial functions, exists. An Englishman, Michael Hurd arranged those versions. The Singapore Symphony Orchestra, under conductor Lim Yau, first recorded this arrangement in 1989. The original version of the national anthem had been in the key of G major, although in 1983 schools received an educational tape describing common mistakes made in singing the anthem and given the option of singing the anthem in F major.[11] In 1993, the shorter version of "Majulah Singapura" became the official version of the hymn.

On January 19, 2001, "Majulah Singapura" officially relaunched in the F-major key, proclaimed that "grander and more inspiring arrangement"[12] of the anthem. The Ministry of Information and the Arts (MITA, now the Ministry of Information, Communications and the Arts (MICA)) took more than a year to produce the new version. Its main objective was to make the anthem more accessible to all Singaporeans.

In May 2000, several leading local composers were invited to rearrange the national anthem in F major. An evaluation panel headed by Bernard Tan selected the version submitted by Cultural Medallion winner Phoon Yew Tien. Phoon's orchestration employed a slower tempo and used more instruments to create a majestic rendition of the anthem. MITA then commissioned Ken Lim to produce a recording by the Singapore Symphony Orchestra conducted by Lim Yau, carried out at the Victoria Concert Hall on 20 November 2000. The new arrangement has been recorded in seven versions, including two orchestral versions (instrumental, and with soloist Jacintha Abisheganaden and the Singapore Youth Choir) and a piano solo version.

Retrieved from https://www.newworldencyclopedia.org/p/index.php?title=Majulah_Singapura&oldid=1085764
Categories:
This page was last edited on 5 November 2022, at 05:34.
Content is available under Creative Commons Attribution/Share-Alike License; additional terms may apply. See Terms of Use for details.