Limbo is a Roman Catholic theological term, referring to the concept of a spiritual realm where the souls of righteous people who lived before the time of Christ could dwell until Jesus Christ made it possible for them to enter Heaven. A similar concept was used to describe the spiritual state of children who died before they could receive the sacrament of baptism, which the Church regarded as a necessary condition for entering Heaven. The Roman Catholic Church has never endorsed this concept as an official doctrine.

The word limbo (late Latin limbus) is a word of Teutonic derivation, meaning literally "hem" or "border," as of a garment, or anything joined on (Italian lembo or English limb). In common usage, the word “limbo” often refers to a place or state of restraint, confinement or delay, such as the situation of a project which is halted pending action by another person. In literature, it often refers to some sort of symbolic “prison.”

The Roman Catholic concept of limbo developed as a result of two dogmatic principles of Catholic faith, that all humans are born with original sin and that the sacrament of baptism was necessary in order to receive salvation and enter Heaven, where the souls of the just experience immediate knowledge of God in perfect happiness. The provincial Council of Carthage (418) declared that, “without baptism, they cannot enter the kingdom of heaven which is eternal life.” These doctrines presented two difficulties. Prophets and religious fathers of the Old Testament, who had lived in righteousness and were surely deserving of salvation, had preceded Jesus and therefore had never been baptized. Did this mean that they were to be eternally excluded from happiness in the knowledge of God? The other problem was the situation of infants and children who died before they could be baptized. These children were considered innocent because they had not had the opportunity to commit personal sin, but still had original sin. Would a just and loving God condemn these innocent children to eternal suffering in Hell?

In response, Catholic theologians developed the concept of a region located on the border of Hell and called it limbus, a Latin word meaning, “an ornamental border to a fringe” or “a band or girdle.” The English word, limbo, first recorded in a work composed around 1378, is from the ablative form of limbus, the form that would be used in expressions such as “in Limbo.”

Limbo of the fathers

The concept of “limbo” does not appear in the Bible, nor was it ever officially endorsed by the Roman Catholic Church. Nevertheless it was widely accepted that limbo existed as a temporary dwelling place where the souls of the just, who died before the resurrection of Christ, could wait in happiness for the establishment of the Messianic Kingdom, when they would enter a condition of final and permanent bliss.

Theologians interpreted various statements made by Jesus Christ in the New Testament as references to a place or state which Catholic tradition called the limbus patrum (limbo of the fathers).

Matthew 8:11 "And I say to you, That many shall come from the east and west, and shall sit down with Abraham, and Isaac, and Jacob in the kingdom of heaven.”
Matthew 25:1-11 Parable of the five foolish and five wise virgins waiting for the marriage feast.
Luke 16:22-23 Parable of Lazarus and Dives: “And it came to pass the the beggar (Lazarus) died, and was carried by the angels into Abrahams’ bosom: The rich man also died, and was buried; And in hell he lifted up his eyes, being in torment, and saw Abraham afar off, and Lazarus in his bosom.”
Luke 23:43 On the cross, Jesus said to the penitent thief who was crucified beside him, “Verily, I say unto thee, this day thou shalt be with me in paradise.”

In Ephesians 4:9, Paul teaches that, before ascending into Heaven, Christ "also descended first into the lower parts of the earth," and Peter (1 Peter 3:18-20) teaches that "being put to death indeed, in the flesh, but enlivened in the spirit," Christ went and "preached to those souls that were in prison, which had been some time disobedient, when they waited for the patience of God in the days of Noah." Medieval drama sometimes portrayed Christ leading a dramatic assault, "The Harrowing of Hell," during the three days between the Crucifixion and the resurrection. In this assault, Jesus freed the souls of the just and escorted them triumphantly into heaven. This imagery is still used in the Eastern Orthodox Church's Holy Saturday liturgy (between Good Friday and Pascha). 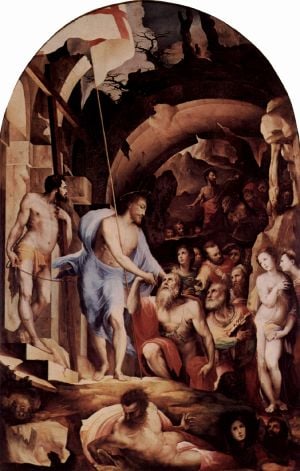 The concept of the limbo of the fathers (limbus patrum) is that people who lived good lives but died before Jesus' Resurrection did not go to heaven, but rather had to wait for Christ to open heaven's gates. This concept of limbo affirms that one can get into heaven only through Jesus Christ but does not portray Mosesand other Old Testament figures as being punished eternally in hell.

The foundational importance of the sacrament of baptism (using water) or the non-sacramental baptism of desire (justification through experiencing repentance and a strong desire for baptism) or baptism of blood (martyrdom) in Roman Catholic theology gave rise to the argument that the unbaptized are not eligible for entry into Heaven, because the original sin of human nature precludes them from the immediate knowledge of God enjoyed by the souls in Heaven. Since infants are incapable of either professing their faith or performing acts of Christian charity, the only means through which they might receive the grace of justification required for salvation is baptism with water. There was a question about whether infants who died before being baptized could be saved. Early Church writers, notably St. Augustine, considered that unbaptized infants were excluded from heaven, and thus went to hell.[1]

Many Roman Catholic theologians believe that unbaptized children, as well as others lacking the use of reason, go to "the limbo of children" (limbus infantium or limbus puerorum) after death; limbo is a sort of intermediate state, in which souls are denied the immediate knowledge of God, but saved from the torment of hell. Thomas Aquinas described the limbo of children as an eternal state of natural joy, untempered by any sense of loss at how much greater their joy might have been had they been baptized. He argued that this was a reward of natural happiness for natural virtue; a reward of supernatural happiness for merely natural virtue would be inappropriate since, due to original sin, unbaptized children lack the necessary supernatural grace. The sixteenth century theologian, Cajetan, suggested that infants dying in the womb before birth, and so before ordinary sacramental baptism could be administered, might be saved through their mother's wish for their baptism; attempts to have his theory condemned as heretical were rejected by the Council of Trent.[2]

Limbo of the Children is a theological speculation that has never received official endorsement from the Roman Catholic Church.[3] During the last three centuries, individual Catholic theologians (Bianchi in 1768, H. Klee in 1835, Caron in 1855, H. Schell in 1893, Ludwig Ott in 1952) have formulated alternative theories concerning the salvation of children who die unbaptized. By 1992 Catechism of the Catholic Church expressed the hope that children who die unbaptized might still be saved. The International Theological Commission was asked by Pope John Paul II to consider the question of the fate of unbaptized babies. Under Pope Benedict XVI, the Commission is expected to recommend in their report that the doctrine that all children who die do so “in the hope of eternal salvation” be formally adopted, thus rejecting the theological hypothesis of “limbo.”

Protestant and Orthodox denominations do not accept the existence of limbo; it is a Roman Catholic concept[4]. Martin Luther and others have taught that the souls of those who have died are unconscious (or even nonexistent), awaiting their destiny on a future Judgment Day.

The Zoroastrian concept of hamistagan is a neutral state in which a soul that was neither good nor evil awaits Judgment Day.

In the Divine Comedy, Dante depicts limbo as the first circle of Hell, located beyond the river Acheron but before the judgment seat of Minos. The virtuous pagans of classical history and mythology inhabit a brightly lit and beautiful, but somber, castle which is seemingly a medievalized version of Elysium. In the same work, a semi-infernal region, above limbo on the other side of Acheron, but inside the Gate of Hell, is the "vestibule" of Hell and houses so-called "neutralists" or "opportunists," who devoted their lives neither to good nor to evil.

In literature, the name "limbo" is sometimes applied in a wider sense to a place or state of restraint, confinement, or exclusion, and is practically equivalent to "prison." In Henry VIII, Shakespeare uses “limbo of the Fathers” to signify prison. In the Italian Renaissance poet Luduvico Ariosto's Orlando Furioso (1532), the knight Astolfo visits the moon's Limbo and discovers all of Earth's wastages: Talents locked up in named vases, and bribes hanging on gold hooks. Samuel Taylor Coleridge uses “limbo” to describe the waking nightmares of an opium addict: "The sole true Something—This! In Limbo's Den/It frightens Ghosts, as here Ghosts frighten men."

Limbo as a colloquialism

Taken from the original meaning, in colloquial speech, "limbo" often refers to a place or state of restraint, confinement or delay, such as the situation of a project which is halted pending action by another person. A "legal limbo" may occur when conflicting laws or court rulings leave a person without legal recourse.