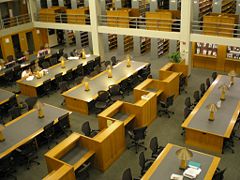 A law library is a library designed to assist law students, attorneys, judges, and their law clerks in finding the legal resources necessary to correctly determine the state of the law.

The processes of legal research vary according to the country and the legal system involved. However, legal research generally involves tasks such as finding primary sources of law, or primary authority, in a given jurisdiction (cases, statutes, regulations, etc.), searching secondary authority for background information about a legal topic (law review, legal treatise, legal encyclopedias, etc.), and searching non-legal sources for investigative or supporting information. Sources of legal information range from printed books, to free legal research websites and information portals to fee database vendors such as LexisNexis and Westlaw. Law libraries around the world provide research services to help their patrons find the legal information they need. Many law libraries and institutions provide free access to legal information on the web. 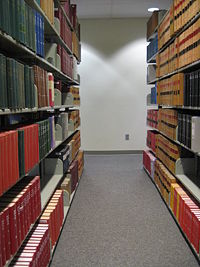 The stacks inside a typical law library.

Every accredited American law school is required by the American Bar Association to have a law library meeting certain minimum specifications with respect to quantity and quality of materials available. Some law school libraries are kept in the same building as the general library, but many are either in the law school's building or in a separate facility altogether. Most court buildings also have a law library; the United States Supreme Court building houses one of the most extensive in the world, rivaled by the Law Library of Congress. Some of the larger law firms maintain a private library for their own attorneys, but many firms in college towns and larger cities with universities simply dispatch their attorneys to local law schools to do legal research. In some U.S. states, like California, all counties are required by state law to maintain a public law library for the benefit of the general public.[1]

A typical law library will include in its collection a large number of works not seen in other libraries, including a full set of United States Reports, one or both of the unofficial U.S. Supreme Court reporters, the West National Reporter System, the West American Digest System, official reporters from various states, the Federal Register, volumes of American Jurisprudence, bound volumes containing issues of prominent law reviews from around the country, federal and state statutes and regulations (such as the United States Code and Code of Federal Regulations), and a variety of treatises, encyclopedias, and practice guides.

Large libraries may contain many additional materials covering topics like legal education, research, and writing; the history of the American legal system and profession; the history behind certain high-profile cases; techniques of oral argument; and the legislative history of important federal and state statutes. In contrast, a small law library, at a minimum, may contain only one unofficial Supreme Court reporter, selected West national reporters and digests specific to the state in which the library is located, the United States Code, a few state-specific reporters and statutory compilations (if they exist for a particular state), and several state-specific treatises and practice guides.

In recent years, the advent of online legal research outlets such as FindLaw, Westlaw, LexisNexis, and HeinOnline has reduced the need for some types of printed volumes like reporters and statutory compilations. A number of law libraries have therefore reduced the availability of printed works that can easily be found on the Internet, and have increased their own Internet availability. On the other hand, some university law libraries retain extensive historical collections going back to the earliest English reports.

The American Association of Law Libraries

The American Association of Law Libraries "is a nonprofit educational organization with over 5,000 members nationwide, founded in 1906.[3] AALL's mission is to promote and enhance the value of law libraries to the legal and public communities, to foster the profession of law librarianship, and to provide leadership in the field of legal information and information policy."[4]

The Law Library of Congress of the United States is the largest law library in the world, holding over three million volumes including key legal documents of every jurisdiction of the world. U.S. Congress established the Law Library of Congress in 1832 to provide access to legal documents for the Congress and the Supreme Court. The Library grew over the century and became the leading law library in the world. As of 2008, the Library was staffed with about one hundred layers, librarians, and professional staffs to assist legal researchers in the U.S. and from the world.[5]

The following is a few examples of law libraries in the U.S.

The Social Law Library, founded in 1804, is the one of the oldest law libraries in the United States. It is located in the John Adams Courthouse at Pemberton Square in Boston, Massachusetts, the same building which houses the Massachusetts Supreme Judicial Court and the Massachusetts Appeals Court.

The history of the library is very much bound up in the history of the Supreme Judicial Court itself. Many of the proprietors of the library were chief justices of the Supreme Judicial Court, including Theophilus Parsons, Lemuel Shaw, Horace Gray, and Oliver Wendell Holmes, Jr.. The library was also caught up in the debates between the Federalists, who wanted to see the common law (based on English law) received into the newly formed United States, and the Jeffersonians, who preferred to have a civil law-based system similar to the Napoleonic Code. The Federalists, who were prominent in Boston and integral to the library's founding, began importing English law books for local lawyers to use. The Supreme Judicial Court, needing a law library for their own use, permitted the library to be moved into the Court's offices in exchange for access to its many volumes. Meanwhile, the Massachusetts General Court (the state legislature of Massachusetts) established the office of Reporter of Decisions, which was the first office of its kind at the state level in the United States. This turn of events allowed the public greater access to the decisions of the courts of Massachusetts, and in turn popularized the common law legal system in the United States.

Today, many lawyers in the Boston area use the library for legal research. Members pay a yearly fee for the privilege of being admitted to the library and using its facilities, with the exception of state, court or non-profit legal services organizations members. The library has over 450,000 volumes of printed materials, most of which can be searched using an online catalog accessible via the library's web site. 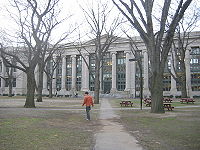 Langdell Hall is the largest building on the campus of Harvard Law School in Cambridge, Massachusetts. It is home to the school's library, the largest academic law library in the world, and is named for pioneering law school dean Christopher Columbus Langdell. It is built in a modified neoclassical style.

The building was commissioned in 1905 by law school dean James Barr Ames, as the school was outgrowing H.H. Richardson's Austin Hall. It was designed by Richardson's successor, the firm Shepley Rutan & Coolidge. The southern wing of the current building was completed and occupied by 1907. The same firm, rechristened Coolidge, Shepley, Bulfinch and Abbot, completed the northern and western wings in 1929. In 1997, the firm was appointed once again, this time to renovate the building. The renovations expanded the library, which now takes up most of the building, with the exception of two classrooms.

The main reading room on the fourth floor is open to the public. Other notable parts of the building include the Caspersen Room, which houses rare books, manuscripts, and paintings. The lobby of the building is graced by a statue of Joseph Story, Harvard professor and Supreme Court justice, sculpted by his son, William Wetmore Story. 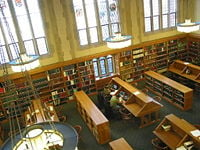 The Lillian Goldman Law Library is the law library of Yale Law School. It is located in the Sterling Law Building and has almost 800,000 volumes of print materials and about 10,000 active serial titles, in which there are 200,000 volumes of foreign and international law materials.

Retrieved from https://www.newworldencyclopedia.org/p/index.php?title=Law_library&oldid=1083807
Categories:
Hidden category:
This page was last edited on 25 October 2022, at 17:57.
Content is available under Creative Commons Attribution/Share-Alike License; additional terms may apply. See Terms of Use for details.