A kantele (ˈkɑntele, from Finnish) or kannel (ˈkɑnːe) is a traditional plucked string instrument of the zither family. It is related to the Russian gusli, the Latvian kokle and the Lithuanian kanklės. Together these instruments make up the family known as Baltic Psalteries.

The kantele has a long history in Finnish balladry and is experiencing a resurgence in popularity recently. It's bell-like tones, in the hands of a skilled musician, create a mystical mood capable of transporting the listener to legendary times and places of ancient folklore. 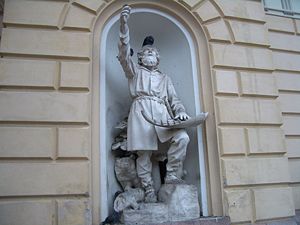 Finnish storyteller with a traditional kantele.

Scholars debate how old an instrument the kantele is, with its age variously estimated from 1,000 to 2,000 years. It has a strong connection with the ancient art of rune singing.

Its mythical origins are described in Finland's national epic, Kalevala, where the magician Väinämöinen creates the first kantele from the jawbone of a giant pike and a few hairs from Hiisi's (the Devil's) gelding. The music it makes draws all the forest creatures near to wonder at its beauty. The kantele has a distinctive bell-like sound. Later Väinämöinen makes a wooden kantele, strung with the hair of a willing maiden, and its magic proves equally profound. It is the gift the eternal sage leaves behind when he departs Kaleva at the advent of Christianity.

The oldest forms of kantele have five or six horsehair strings and a hollowed out wooden body carved from a piece of alder, pine or spruce. Modern instruments have metal strings, tuning pegs and often a body made from several pieces of wood. Modern concert kanteles can have up to 39 strings. Modern instruments with less than 15 strings are generally more closely modeled on traditional shapes than the concert kantele, and form a separate category of instrument known as "small kantele."

The Finnish kantele generally has a diatonic tuning, although the small kantele, with between five and 15 strings, are often tuned to a gapped mode, missing a seventh and with the lowest-pitched strings tuned to a fourth below the tonic as a drone. The Estonian kannel has a variety of traditional tunings. Concert versions have a switch mechanism (similar to semitone levers on a modern folk harp) for making sharps and flats. Players hold the kantele on their laps or on a small table. There are two main techniques to play, either plucking the strings with the fingers or strumming through the strings.

Kantele has a clear, almost bell-like tone. The lower register has a deep resonating bass, the higher strings have a clear and harmonious sound. In the hands of a master player, the effect can be an almost wall like sound, with multiple, varied layers of melodies. It has a tranquil, contemplative quality that draws the listener in, calms and soothes, while the melody tells its story, weaving a magical tale.

Kanteles have been used to express a variety of musical moods and forms, from waltzes to polkas, traditional folk ballads, and new age meditations. In a 2005 Walt Disney movie "The Lion, Witch and Wardrobe" composer Harry Gregson-Williams chose the kantele, played by Finninsh musician Timo Väänänen when he wanted to use an instrument to describe an icy and snowy land. A number of recordings of various styles of traditional and "new age" kantele music are also available.

There has been a strong resurgence of interest in playing the kantele in Finland. Lessons for playing the instrument are available in schools and music institutes up to conservatories and the Sibelius Academy, the only music university in Finland. Artistic doctoral studies are being made at the Academy with traditional, western classical and electronic music. New and original music for the kantele has been created by contemporary Finnish composers, concertos for kantele and strings, kantele and a chamber orchestra, kantele and percussion, pieces for kantele, cello and flute, and many others.

Arguably the most known and influential kantele musician is Professor Martti Pokela, an innovator whose repertoire spans from folk to popular to avant-garde concert music. His compositions and performances have an element of improvisation and playing by ear, which allow the performer to intuitively respond to each audience and performance.

Finnish instrument maker, Koistinen, has developed an electric kantele[1], which employs pick-ups similar to those on electric guitars. It has gained popularity among Finnish heavy metal artists. Another invention is a modern small kantele equipped with a strap, which can be played while standing, allowing a degree of mobility and stage presence not known previously.