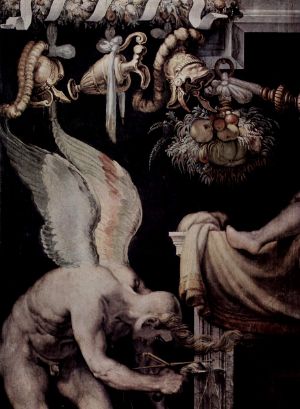 An artistic representation of Kairos by Francesco Salviati.

Kairos (καιρός) is an ancient Greek word meaning the "right or opportune moment." The ancient Greeks had two words for time, chronos and kairos. While the former refers to chronological or sequential time, the latter signifies "a time in between," a moment of undetermined period of time in which "something" special happens." What the special something is depends on whom is using the word. While chronos is quantitative, kairos has a qualitative nature.[1]

Kairos time is usually perceived as a time of crisis. With this in mind, one has a possibility of participating in a “new creation.” One has the choice of danger or opportunity, a chance to build something new out of the old. "Kairos' time" bridges the tearing down of the “old way” with the building of a “new way.”

In rhetoric kairos is "a passing instant when an opening appears which must be driven through with force if success is to be achieved."[2] Kairos was central to the Sophists, who stressed the rhetor's ability to adapt to, and take advantage of, changing, contingent circumstances. In Panathenaicus, Isocrates writes that educated people are those who manage well the circumstances which they encounter day by day, and who possess a judgment which is accurate in meeting occasions as they arise and rarely misses the expedient course of action.[3]

Kairos is also very important in Aristotle's scheme of rhetoric. Kairos is, for Aristotle, the time and space context in which the proof will be delivered. Kairos stands alongside other contextual elements of rhetoric: The Audience which is the psychological and emotional makeup of those who will receive the proof; and, To Prepon which is the style with which the orator clothes their proof.

The term "kairos" is used in theology to describe the qualitative form of time. In the New Testament, kairos means "the appointed time in the purpose of God," the time when God acts (e.g. Mark 1.15, the kairos is fulfilled). It differs from the more usual word for time which is chronos (kronos).

In the Eastern Orthodox Church, before the Divine Liturgy begins, the Deacon exclaims to the Priest, "Kairos tou poiesai to Kyrio" ("It is time [kairos] for the Lord to act"); indicating that the time of the Liturgy is an intersection with Eternity.

In The Interpretation of History, neo-orthodox Lutheran theologian Paul Tillich made prominent use of the term. For him, the kairoi are those crises in history that create an opportunity for, and indeed demand, an existential decision by the human subject—the coming of Christ being the prime example (compare Barth's use of geschichte as opposed to historie).[4]

According to ancient Greeks, Kairos was the god of the “fleeting moment,” “a favorable opportunity opposing the fate of man.” The moment must be grasped (by the tuft of hair on the forehead of the fleeing figure); otherwise the moment is gone and can not be re-captured (shown in sculpture by the back of head being bald.) A bronze statue of Kairos made by the famous Greek sculptor Lysippos from Sikyon was famous in antiquity. The original bronze allegoric statue made by Lysippos stood at his home, in the Agora of Hellenistic Sikyon, and the following epigram by the poet Poseidippos was said to be carved onto the statue of Kairos:

"And who are you? Time who subdues all things.
Why do you stand on tip-toe? I am ever running.
And why you have a pair of wings on your feet? I fly with the wind.
And why do you hold a razor in your right hand? As a sign to men that I am sharper than any sharp edge.
And why does your hair hang over your face? For him who meets me to take me by the forelock.
And why, in Heaven's name, is the back of your head bald? Because none whom I have once raced by on my winged feet will now, though he wishes it sore, take hold of me from behind.
Why did the artist fashion you? For your sake, stranger, and he set me up in the porch as a lesson."[5]

This statue was the original model for the various representations of Kairos made in ancient times and Middle Ages as well. John Tzetzes wrote about it, as well as Himerius. Several representations of Kairos survive from the ancient world including a relief (ca. 160 C.E.) kept at the Museum of Antiquities of Turin (Italy); another relief was kept (now lost) at Palazzo Medici in Florence; an onyx gem (ex Blacas Collection, I-II century C.E.) with an incision of the god Tempus with attributes of Kairos is kept at the British Museum; a marble relief showing Kairos, Bios (the Life), and Metanoia (Afterthought, the female Latin Paenitentia) is in the cathedral of Torcello (XI century C.E.); a monochrome fresco by Mantegna at Palazzo Ducale in Mantua (about 1510 C.E.) shows a female Kairos (most probably Occasio) with a young man trying to catch her and a woman representing Paenitentia.

The image of hair hanging on the forehead and a bald nucha was associated in Roman times to the goddess Fortuna, the personification of good and bad luck. Several authors, such as Disticha Catonis, refer to the Latin concept of Occasio (a female word that can be considered as a literal translation of the Greek Kairos) in these terms: "Rem tibi quam scieris aptam dimittere noli: fronte capillata, post haec occasio calva," which means "Don't let that what you consider good for you escapes by; chance has hair over her forehead, but behind she's bald" (II, 26). Phaedrus (V,8) has a similar writing and he himself admits that the theme was not his own but more ancient. Callistratus has a long text describing the statue by Lysippos (Descriptions, 6).

The theme of Kairos was felt as extremely important during the Middle Ages. Carmina Burana, 16, a famous poem about Fortune, mentions Kairos in this way: "verum est quod legitur, fronte capillata, sed plerumque sequitur occasio calvata," which means "it is true what is read, that Occasio has the forehead with hair, but that almost always she passes being bald."

A concept similar to Kairos is that behind the famous motto "Carpe Diem" and a sort of recurrence in the idea of Kairos is linked with the theme of The Wheel of Fortune which continuously rotates; in fact the Greek words used by Poseidippos to describe the Kairos (in the verse "I am ever running") are "aeì trochào" which literally mean "I always rotate," and the verb itself is the same used by the poet and astronomer Aratus (Phaenomena, 227, 309) to pinpoint the eternal motion of the celestial spheres. It is not by chance that in Carmina Burana, 17, the Fortune is associated to an ever-rotating wheel (Tibullus himself described the Fortune with a wheel: "Versatur celeri Fors levis orbe rotae," I, 5, 70).

In the Kairos Document, an example of liberation theology in South Africa under Apartheid, the term kairos was used to denote "the appointed time," "the crucial time" into which the document / text is spoken.

Retrieved from https://www.newworldencyclopedia.org/p/index.php?title=Kairos&oldid=1080893
Categories:
Hidden category:
This page was last edited on 4 October 2022, at 22:33.
Content is available under Creative Commons Attribution/Share-Alike License; additional terms may apply. See Terms of Use for details.