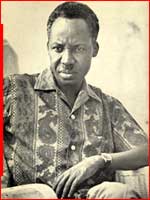 Julius Kambarage Nyerere (April 13, 1922 - October 14, 1999) was President of Tanzania (previously Tanganyika), from the country's founding in 1964, until his retirement in 1985. Born in Tanganyika to a local Zanaki chief called Nyerere Burito, Julius Nyerere was known by the Swahili name Mwalimu, or "teacher," because of his profession before becoming active in politics. Nyerere was the first African head of state to retire voluntarily. He stepped down because he realized that his socialist policies of communal ownership of farms and state ownership of services were not working. Under his Presidency, Tanzania slipped from being the largest exporter of food in Africa to the biggest importer of food. However, he made no attempt to cling to power or to influence his successors, who restored capitalism. Nyerere had wanted to make Tanzania self-reliant, free from indebtedness to former colonial powers or to the West. Like other leaders of former colonies, he saw colonialism and capitalism as responsible for the subjugation of their people. A devout Catholic, Nyerere often fasted and did not enrich himself at his nation's expense. His preferred dress, a Mao tunic, contrasted with the flamboyant uniforms worn by some of his contemporary heads of African states. While his policies may have proved disastrous for his country, few question his sincerity. Tanzania remains one of the poorest countries in the world, but its economy has grown since Nyerere's retirement, reaching 6 percent during 2006.[1] While his economic policies are acknowledged as having failed, other policies succeeded. For example, under Nyerere literacy and health care "surpassed anything most African countries had achieved," thus, his legacy has been described as "rich and varied" and his intentions as always "noble." [2] He also battled the International Monetary Fund over the issue of Third World debt, and created "a genuine national entity out of a hotch-potch of some 120 ethnic groups" which some consider to be his most "enduring achievement."[3] Even after the failure of his socialist experiment, he retained, says a Guardian obituary, his "worldwide moral authority."[4]

Nyerere began attending Government Primary School, in Musoma, at the age of 12, where he completed the four-year program in three years and went on to Tabora Boys Government Secondary School. He received a scholarship to attend Makerere University (at that time it was the only tertiary education institution in East Africa), where he obtained a teaching diploma. He returned to Tanganyika and worked for three years at St. Mary’s Secondary School in Tabora, where he taught biology and English. In 1949, he got a scholarship to attend the University of Edinburgh (he was the first Tanzanian to study at a British university and only the second to gain a university degree outside Africa) where he obtained his Masters of Arts degree on economics and history in 1952. In Edinburgh, partly through his encounter with Fabian thinking, Nyerere began to develop his particular vision of connecting socialism with African communal living.

On his return to Tanganyika, Nyerere took a position teaching History, English, and Kiswahili at St. Francis’ College, near Dar es Salaam. It is at St. Francis’ College that he founded TANU. His political activities attracted the attention of the colonial authorities, and he was forced to make a choice between his political activities and teaching. He was reported as saying that he "was a schoolmaster by choice and a politician by accident." He resigned and continued with his work on his goal to bring a number of different nationalist factions into one grouping, which was achieved in 1954. Nyerere traveled throughout the country, speaking to common people and tribal chiefs, trying to garner support for the movement towards independence. He also spoke on behalf of TANU to the Trusteeship Council and Fourth Committee of the United Nations, in New York. His oratory skills and integrity helped Nyerere achieve TANU's goal for an independent country without war or bloodshed. The cooperative British governor Sir Richard Turnbull was also a factor in the struggle for independence. Nyerere entered the Colonial Legislative council in 1958, and was elected chief minister in 1960. In 1961, Tanganyika was granted self-governance and Nyerere became its first Prime Minister on December 9, 1961. A year later, Nyerere was elected President of Tanganyika when it became a Republic. Nyerere was instrumental in the union between the islands of Zanzibar and the mainland Tanganyika to form Tanzania, after a 1964 coup in Zanzibar toppled Jamshid bin Abdullah, who was the Sultan of Zanzibar.

When in power, Nyerere implemented a socialist economic program (announced in the Arusha Declaration), establishing close ties with the China, and also introduced a policy of collectivization in the country's agricultural system, known as Ujamaa, or "familyhood." Nyerere believed that people truly become "persons" within community—starting with the family, then moving into an extended family, and from there into the wider community. Small scale village industry, similar to M. K. Gandhi's model, was ideal for Africa. Influenced by the Mahatma, Nyerere was awarded the Gandhi Peace Prize in 1995. Personhood leads to service to the community. Wealth would thus spread horizontally, not vertically. Although some of his policies can be characterized as socialist, many regard that Nyerere was first and foremost an African, and secondly a socialist. He was what is often called an African socialist.

Nyerere had tremendous faith in rural African people and their traditional values and ways of life. He believed that life should be structured around the ujamaa, or extended family found in traditional Africa. He believed that in these traditional villages, the state of ujamaa had existed before the arrival of imperialists. All that needed to be done was to return to this state and capitalism would be forgotten. He believed that this would be a true repudiation of capitalism, since his society would not rely on capitalism for its existence. This ujamaa system failed to boost agricultural output and by 1976, the end of the forced collectivization program, Tanzania went from the largest exporter of agricultural products in Africa to the largest importer of agricultural products in Africa. With the realization that the Tanzanian economy did not flourish, and being unwilling to lead Tanzania using an economic model he did not believe in, Nyerere willingly announced that he would retire after presidential elections in 1985, leaving the country to enter its free market era under the leadership of Ali Hassan Mwinyi.

Nyerere was instrumental in putting both Ali Hassan Mwinyi and Benjamin Mkapa in power. He remained the chairman of Chama Cha Mapinduzi (ruling party) for five years following his presidency until 1990, and is still recognized as the Father of the Nation. However, he did not interfere in his successors policies, which reversed many of his own.

Nyerere was one of the African Leaders during the Pan-African movement that swept the continent in the 1960s. He was a larger-than-life person, a seemingly incorruptible individual and a committed Pan-africanist. Nyerere was also one of the founders of the Organization of African Unity in 1963. Nyerere provided a home for a number of African liberation movements including the African National Congress (ANC) and the Pan African Congress (PAC) of South Africa, FRELIMO when it sought to overthrow Portuguese rule in Mozambique, and ZANLA (and Robert Mugabe) in its struggle to unseat the white regime in Southern Rhodesia (now Zimbabwe). From the mid-1970s, along with President Kenneth Kaunda of Zambia, he was an instigator and leader of the "Front Line States," which provided uncompromising support for the campaign for Black Majority Rule in South Africa. In 1979, he led Tanzania into war against Uganda, then under the dictatorship of Idi Amin, resulting in the defeat of Uganda and exile of Amin. However, Nyerere also instigated the 1977 coup d'etat that ousted the first president of the Seychelles, James Mancham, and replaced him with socialist France-Albert René, a move regarded to have set back development in the Seychelles for many years.

Nyerere's foreign policy overall emphasized neutrality in the Cold War, and under his leadership, Tanzania enjoyed friendly relations with both the West and the East.

Outside of Africa, Nyerere was a model to Walter Lini, Prime Minister of Vanuatu, whose theories on Melanesian socialism owed much to the ideas he found in Tanzania, which he visited. Lecturers inspired by Nyerere also taught at the University of Papua New Guinea in the 1980s, helping educated Melanesians familiarize themselves with his ideas.

After the Presidency, Nyerere remained the Chairman of CCM until 1990, when Ali Hassan Mwinyi took over. Nyerere remained vocal about the extent of corruption and corrupt officials during the Ali Hassan Mwinyi administration. He also blocked Jakaya Kikwete's nomination for the presidency, citing that he was too young to run a country. Nyerere was instrumental in getting Benjamin Mkapa elected (Mkapa had been Minister of Foreign Affairs for a time during Nyerere's administration).

In one of his famous speeches during the CCM general assembly, Nyerere said in Swahili "Ninang'atuka," meaning that he was pulling out of politics for good. He moved back to his childhood home village of Butiama in western Tanzania. During his retirement, he continued to travel the world, meeting various heads of government as an advocate for poor countries and especially the South Center institution. Nyerere traveled more widely after retiring than he did when he was president of Tanzania. One of his last high-profile actions was as the chief mediator in the Burundi conflict in 1996. He died in a London hospital of leukemia on October 14, 1999.

In January 2005, the Catholic diocese of Musoma opened a cause for the beatification of Julius Nyerere. Nyerere was a devout Catholic who attended Mass daily throughout his public life and was known for fasting frequently.

The African Union, formerly the Organization of African Unity, which Nyerere was largely responsible for establishing, is increasingly taking on an important role in stabilizing the region, in peacekeeping and peace-building in collaboration with the United Nations. Nyerere's example of voluntary retirement from power has set a standard that few African heads of state have yet met. His strong opposition to Idi Amin's dictatorial regime in Uganda and his 1979 invasion, in retaliation for Amin's 1978 incursion into Tanzania, toppled the dictator to popular acclaim, setting an example of Africa policing Africa. In retirement, he continued to work for African unity and also to resolve conflicts, including the civil war in Burundi and to find ways of lessening the rich-poor gap between the developed and developing nations of the world, chairing the South Commission. Despite the failure of his economic policies, he remained convinced that socialism was the right direction for poor countries to take. His modest lifestyle added to his moral authority. He was untainted by scandal or by charges of corruption. Family was central to his concerns. He married Maria Magige in 1953. They had five sons and two daughters. In addition to political writings, he translated two Shakespearean plays into Swahili.

Retrieved from https://www.newworldencyclopedia.org/p/index.php?title=Julius_Nyerere&oldid=1080847
Categories:
Hidden category:
This page was last edited on 4 October 2022, at 21:14.
Content is available under Creative Commons Attribution/Share-Alike License; additional terms may apply. See Terms of Use for details.