Sir James Richard Marie Mancham KBE (August 11, 1939 – January 8, 2017) was a Seychellois politician. Committed to the principles of democracy, he founded the Seychelles Democratic Party and was the first President of Seychelles from 1976 to 1977. Despite being ousted in a Marxist coup, Mancham returned to the Seychelles after 15 years of exile to bring about reconciliation, democratic rule, and prosperity to his nation. Active in many international organizations, he continued to serve as a tireless promoter of Seychelles, democracy, and world peace.

James Mancham was the eldest son of Richard and Evelyn (née Tirant) Mancham. After graduating high school and Seychelles College, his father, a successful businessman, sent James to law school in England. He also studied at the University of Paris.

Mancham married Heather Jean Evans in 1963 and the marriage was dissolved in 1974. They had two children: one daughter (Caroline), and one son (Richard). In 1985, while in exile in London, he remarried, to Catherine Olsen, an Australian journalist working in London, who already had one son (Ben), and with whom he had one son (Alexander).

During his years in exile, Mancham was active as an International Trade Consultant; Joint-venture specialist and entrepreneur; President of Berlin European Airways (1987 to 1990); President of International Promotion Marketing and Development Ltd; (IPMD Ltd.); Director Pembroke Capital Aircraft (Shannon) Ltd.; Consultant Mercandia Shipping BV Ltd.; Consultant to Midland and Scottish Resources (Oil Exploration) Ltd.; Consultant to Germania Flugg GMBH of Germany. He founded The Crusade for Restoration of Democracy in Seychelles and was Lecturer on "The Struggle for Power in the Indian Ocean," to US and European Universities, Civil Organizations and on the cruise ship "Lindblad Explorer."[1] He also participated in international conferences with other former heads of state and religious leaders of diverse faiths through organizations such as the Universal Peace Federation and the Interreligious and International Federation for World Peace.[2] 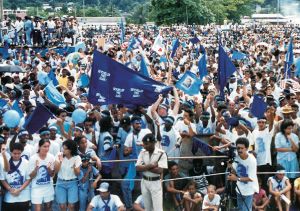 Crowds welcomed James Mancham at the airport on his return from exile.

In 1992 he was able to return to the Seychelles, where he spent the rest of his life working to strengthen democracy there and to promote national reconciliation as well as promoting his nation as a tourist destination for the wealthy. He was known for hosting and attending many guests and diplomats visiting the Seychelles, encouraging them to sing native and popular songs or poetry to lift their spirits.

Mancham died suddenly on January 8, 2017 at age 77.[3][4] He was buried in the State House cemetery on January 12, following a state funeral with full military honors.[5] Both Former Presidents René and Michel were in attendance, confirming reconciliation of the nation.

When Britain announced its intention to give independence to the colony, Mancham founded the Democratic Party (S.D.P.).[6] France-Albert René founded an opposition party, the Seychelles People's United Party (S.P.U.P) with the support of the Soviet Union. As Chief Minister of the colony, Mancham promoted tourism to the Seychelles and arranged for the building of the airport that was to make the Seychelles accessible to the rest of the world. Tourism increased and the economy developed. In 1976, Mancham won the popular vote when the British gave the Seychelles independence. As Seychelles was a member of the Organization of African Unity (O.A.U.), Mancham traveled throughout Africa to O.A.U. meetings, both as Chief Minister of the colony and as President of the Republic, visiting prominent African leaders, including Jomo Kenyatta, Jean Bedel Bokassa, Mobuto Sese Seko, Houphouey Boigny, and Leopold Senghor.[7]

Less than a year in office as President, in June 1977, Mancham was deposed in a coup by Prime Minister France-Albert René, who had the support of Marxist Tanzanian-trained revolutionaries and Tanzanian-supplied weapons, whilst Mancham was in London to attend the Commonwealth Heads of Government Conference and to celebrate the Jubilee of Queen Elizabeth II.

Mancham lived in exile in London until April 1992. During this period, Mancham was financially successful in several international business ventures. When he returned to the Seychelles following the lifting of the ban on opposition, he proclaimed himself "Apostle of National Reconciliation," and resumed the promotion of tourism to the tropical islands. 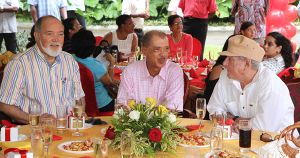 In 2005 he stepped down as leader of the Democratic Party, and spent the rest of his life as a global advocate for peace and reconciliation, speaking often on these topics at international conferences.[9] 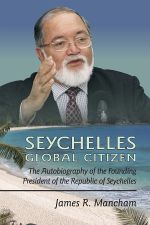 Mancham was the author of a number of books, among them being Paradise Raped about the June 1977 coup d'état in the Seychelles, War on America: Seen from the Indian Ocean, written after the September 11, 2001 attacks on the United States, his autobiography; Seychelles Global Citizen: The Autobiography of the Founding President, in 2009, and Seychelles: The Saga of a Small Nation Navigating the Cross-Currents of a Big World, in 2015. He established and served as Chairman of the publication VIOAS Voice of the Indian Ocean and the Arabian Sea. Mancham also served on the advisory board of International Journal on World Peace. He also loved poetry and published a small book of poems titled Peace of Mind, 2012.

In a welcoming speech Dr. Adish Aggarwala, President of the International Council of Jurists and Chairman of All India Bar Association, said the award for Mr Mancham was to recognize his role in promoting world peace and the pivotal part he played in helping to settle international disputes.

“He is a visionary statesman who has influenced many world leaders with his contemporary philosophy and outlook,” said Dr Aggarwala.[10]

Mancham was also one of the recipients of the Gusi Peace Prize for statesmanship in 2011.[11]

In 2013, Mancham was invited to join the prestigious 'Club de Madrid', a world leadership alliance comprising 92 former democratic heads of State and government who believe in democracy and the promotion of democratic values.[12] 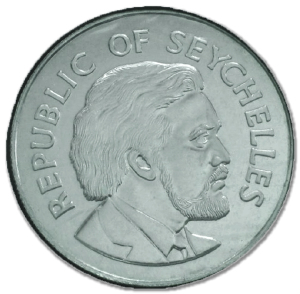 Mancham will be remembered for the many years of his life devoted to the service of his country, from the founding President of the Seychelles as an independent nation to his efforts to promote democracy and peace: “He carried high the banner of his conviction and whose principles helped shaped the modern and peaceful Seychelles of today. He contributed tremendously to the independence of Seychelles and played a central role to the country’s move to multi-party democracy,” said Seychelles Designated Minister, Macsuzy Mondon following Mancham's passing.[5]

In his eulogy at Mancham's funeral, the Roman Catholic Bishop Denis Wiehe noted that although Mancham has been active before he died, “It is only now that with his passing away that we fully realize the important role he had played in the history of Seychelles for the past 50 years."[5]

Mancham's role calling for reconciliation in his nation following his return from exile is one that was remarkable and much needed in contemporary times, as well as one that has been needed throughout human history: “The call for reconciliation comes from far away and has biblical roots since the bible continuously calls us to conversion and repentance, not to seek revenge.”[5]