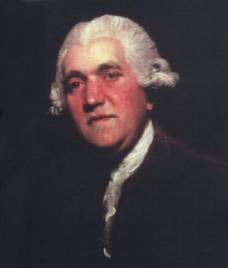 Josiah Wedgwood (July 12, 1730 - January 3, 1795) was a fourth generation English potter, who became the most well-respected pottery designer and manufacturer in England and Europe. Innovative, forward thinking, and precise, he utilized a scientific approach to pottery-making, and made detailed and lengthy research into the use of various materials. He created a more efficient process of pottery making through the logical deployment of labor, and had a great sense of organization in his business, often utilizing the greater talents of others.

Wedgwood is credited with the industrialization of the manufacture of pottery. He perfected a cream-colored earthenware that, with the sanction of Queen Charlotte in 1765, was called Queen’s ware. He also invented Jasperware and black basalt ware in imitation of Greek red-figure vases. He also created the pyrometer, a device for measuring high temperatures—invaluable for gauging oven heats for firings, which earned him commendation as a fellow of the Royal Society. Wedgwood's technique of quality mass production, coupled with his unique and creative wares, allowed him dominate the entire European and English pottery market and set standards of workmanship that have lasted into the present day.

Through his daughter, Susannah, Wedgwood was the grandfather of Charles Darwin, the creator of the theory of evolution.

Born the thirteenth and youngest child of Thomas Wedgwood and Mary Wedgwood (née Stringer; d. 1766), Josiah was raised within a family of English Dissenters. After his father's death, he began to train on the potter's wheel for which he showed much talent. He survived a childhood bout of smallpox to serve as an apprentice potter (1744) under his eldest brother Thomas Wedgwood IV. Smallpox left Josiah with a permanently weakened knee, which made him unable to work the foot pedal of a potter's wheel. As a result, from age 10, he concentrated on designing pottery rather than making it. His brother Thomas refused to let him become a partner in his business, so Josiah worked at a small pottery run by John Harrison.

In his early twenties, Wedgwood began working with the most renowned English pottery-maker of his day, Thomas Whieldon. Working near the burgeoning early industrial city of Manchester, he began experimenting with a wide variety of pottery techniques. Wedgwood made many models himself and also prepared clay mixes, becoming a master of current pottery techniques. He then began his “experiment book,” an invaluable source on Staffordshire pottery. Wedgwood then leased the Ivy Works in his home town of Burslem and set to work there. Over the course of the next decade, his experimentation—helped by a considerable injection of capital from his marriage to a richly endowed distant cousin, Sarah Wedgwood—transformed the sleepy artisan works into the first true pottery factory. 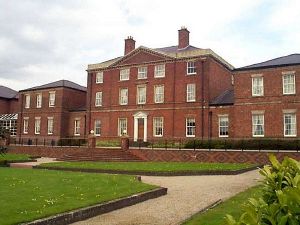 Etruria Hall, the family home, built 1768–1771 by Joseph Pickford. It was restored as part of the 1986 Stoke-on-Trent Garden Festival and is now part of a four-star hotel.

The marriage of Josiah and Sarah Wedgwood produced seven children: 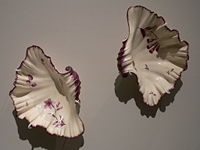 Wedgwood's work was of very high quality. When visiting his workshop, if he saw an offending vessel that failed to meet with his standards, he would smash it with his stick, exclaiming, "This will not do for Josiah Wedgwood!" He was also keenly interested in the scientific advances of his day, and it was this interest that underpinned his adoption of new approaches and methods to revolutionize the quality of his pottery. His unique glazes began to distinguish his wares from anything else on the market.

His fortune was first made in the 1760s, with a type of cream-colored earthenware for the table in the popular Neoclassical style, known as "useful ware," which always remained the bedrock of his business. It filled a long-felt need for good tableware that the middle class could afford, and it established a two-century standard for variants of cream-colored domestic ware.

By 1763, he was receiving orders from the highest levels of the British nobility, including Queen Charlotte. Wedgwood convinced her to let him name the line of pottery she purchased "Queen's Ware," and trumpeted the royal association in his paperwork and stationery. In 1774 the Empress Catherine of Russia ordered the Green Frog Service from Wedgwood. It can still be seen in the Hermitage Museum. Overall Wedgwood created a sizable service of 952 pieces in 1774, for the empress. An earlier commission from Catherine was the Husk Service (1770), now on exhibit in Peterhof.

In 1763, Wedgwood purchased the right to use the new technique of transfer printing on pottery invented by John Sadler and Guy Green in 1755. This in turn enabled the decoration of wares by comparatively unskilled workers. However, the more elaborate and costly Wedgwood pieces were still decorated by hand.

Wedgwood is most famous for his Jasperware, a white, slightly translucent unglazed stoneware that could take on a tint of various colors. He first used blue and green, and later followed with lilac and yellow. The designs were often inspired by cameo carvings. Ornamental appliques in white (made separately in molds) were applied to the piece. A dynamic contrast of white on a colored background imitated the antique cameos of hardstone and glass popular in Europe, England and America. Other new wares followed the jasper collection: rosso antico (red porcelain), cane, drab, chocolate, and olive wares—created by adding coloring oxides. Wedgwood explored every kind of shape and function in a careful scientific manner which maintained his high standard of pottery.

As a burgeoning industrialist, Wedgwood was a major backer of the Trent and Mersey Canal dug between the River Trent and River Mersey in an effort to improve the transportation of his wares, during which time he became friends with Erasmus Darwin, an English physician, natural philosopher, physiologist, inventor, and poet. Darwin was also one of the founding members of the Lunar Society, that Wedgwood later joined.

Wedgwood trademark on back of plate

Later that decade, his burgeoning business caused him to move from the smaller Ivy Works to the newly-built Etruria Works, which would run for 180 years. The factory was so-named after the Etruria district of Italy, where black porcelain dating to Etruscan times was being excavated. Wedgwood found this porcelain inspiring, and his first major commercial success was its duplication with what he called "Black Basalt." Wedgwood hired a famous artist to work at Etruria, the sculptor John Flaxman, whose wax portraits and other relief figures he translated into Jasperware. 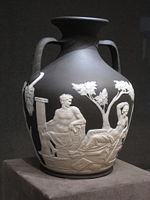 Wedgwood’s enormous and diverse accomplishments dominated the European pottery market. His style of wares appealed in particular to the rising European bourgeois class. Competing factories that produced porcelain and faience suffered severely and many went out of business as a result of his success. Those that did survive turned to the "useful ware" production to stay in business. Wedgwood's Jasperwares were imitated in biscuit (unglazed) porcelain at the factory at Sèvres, and Meissen produced a glazed version called "Wedgwoodarbeit." 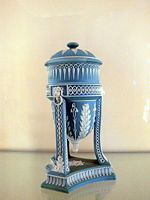 Not long after the new works opened, continuing trouble with Wedgwood's afflicted knee made the amputation of his right leg necessary. In 1780, his long-time business partner Thomas Bentley died, and Wedgwood turned to Erasmus Darwin for help in running the business. Darwin encouraged Wedgwood to invest in steam-powered engines, and in 1782, Etruria was the first factory to install such an engine.

As a result of the close association that grew up between the Wedgwood and Darwin families, Josiah's eldest daughter, Susannah, would later marry Erasmus' son, Robert. One of the children of that marriage was Charles Darwin, the famous naturalist and creator of the theory of evolution. Charles Darwin would also marry a Wedgwood—Emma, his third cousin who was another granddaughter of Josiah. Their inheritance of Josiah's money permitted Charles the life of leisure that allowed him the time to travel and formulate his theory of evolution.

In the latter part of his life, Wedgwood's obsession was to duplicate the Portland Vase, a blue and white glass vase dating to the first century B.C.E. For three years he worked on the project, eventually producing what he considered a satisfactory copy in 1789.

Josiah Wedgwood's unique and creative wares dominated the entire European and English market, even attracting royal customers. His designs established a standard of unparalleled pottery that lasts until today, forcing other potteries to either go out of business or create a more "useful" ware.

Wedgwood was an active member of the Lunar Society and is remembered on their Moonstones in Birmingham. He was elected to the Royal Society in 1783 for the development of a pyrometer. He was a forward looking businessman, and his efforts to modernize and streamline production improved techniques of the industry of pottery, he also contributed to improving the means of transportation of wares. 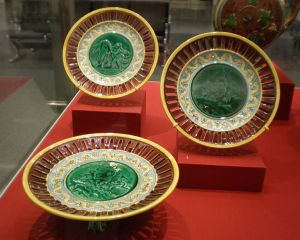 Wedgwood ware from the mid 1800s

He was also a prominent slavery abolitionist. He mass produced cameos depicting the seal for the Society for the Abolition of the Slave Trade and had them widely distributed, which thereby became a popular and celebrated image.

After passing on his company to his sons, Wedgwood died at home, probably of cancer of the jaw, in 1795. He was buried three days later in the parish church of Stoke-on-Trent. Seven years later a marble memorial tablet commissioned by his sons was installed there. He belonged to the fourth generation of a family of potters whose traditional occupation continued through another five generations. Wedgwood's company is still a famous name in pottery today (as part of Waterford Wedgwood; see Waterford Crystal), and "Wedgwood China" is the commonly used term for his Jasperware, the blue (or sometimes green) china with overlaid white decoration, still common throughout the world.