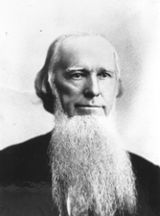 Joseph Emerson Brown (April 15, 1821 – November 30, 1894), often referred to as Joe Brown, was a Governor of Georgia from 1857 to 1865, and a U.S. Senator from 1880 to 1891. During the American Civil War, Brown, a former Whig, had constant disagreements with Confederate President Jefferson Davis, whom he regarded as an incipient tyrant.

Brown was a self made man, who raised himself from rural poverty to become an educated lawyer and eventually Georgia state Supreme Court justice. While his public life mirrored admirable qualities, he used his political influence in private business dealings; acquiring great wealth at the misery of others, mainly convict laborers. He may be best remembered from the lyrics of the folksong Beat It On Down The Line.[1]

Brown was born in Pickens County, South Carolina and at a young age his family moved to Union County, Georgia. In 1840, he left his parents farm to seek an education. Brown, with the help of his younger brother James and his father's plow horse, drove a yoke of oxen 125 miles to an academy near Anderson, South Carolina, where the impoverished Brown exchanged the oxen for eight months' board and lodging. Four years later following his graduation, Brown moved to Canton, Georgia, where he served as head-master of the academy at Canton. While in Canton, he studied law, and in 1847 he opened a law office in Canton. Brown was elected to the Georgia state senate in 1849 and soon became a leader of the Democratic Party in Georgia. He was elected state circuit court judge in 1855 and governor in 1857. As a governor, he diverted state railroad profits to Georgia's public schools and later became a strong supporter of secession from the United States after Abraham Lincoln's election and South Carolina's secession.

When the Confederate States of America was established, Brown spoke out against the military draft as an over-reaching of the Confederate State's central powers, targeting Davis in particular. He attempted to prevent Colonel Francis Bartow from taking Georgia troops out of the state of Georgia to the battle of First Bull Run. As William Tecumseh Sherman overran much of Georgia in 1864, Brown called for an end to the Civil War. The only battle the Georgia Milita engaged in during Sherman's March was the Battle of Griswoldville.

After the war, he spent some time as a political prisoner in Washington, D.C. Following his release, he became chief justice of the Supreme Court of Georgia from 1865 to 1870, when he resigned to become president of the Western and Atlantic Railroad. He supported President Andrew Johnson's Reconstruction policy and became a member of the Republican Party for a time. After Reconstruction, he rejoined the Democrat Party and was elected to the U.S. Senate in 1880. Soon after his election to the Senate, Brown became the first Georgia official to support public education for all children. This was not a popular position at the time. Brown supported a Reconstruction measure–convict lease–which brought him great wealth after the Civil War. Under his scheme, Georgia leased convicts as hard laborers to companies like Raccoon Mountain Coalmine, earning Brown $98,000 annually and inspiring the Jesse Fuller folksong Beat it on down the Line. Brown was re-elected in 1885, but resigned in 1891 due to poor health. He died in 1894 in Atlanta, Georgia. He is buried in Oakland Cemetery.