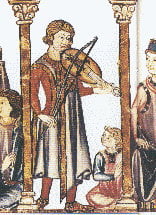 A musician plays the vielle in a fourteenth century medieval manuscript.

Johannes de Grocheio (Grocheo) (ca. 1255 – ca.1320) was a Parisian musical theorist of the early fourteenth century. His French name was Jean de Grouchy, but he is more commonly known by his Latinized name. A Master of Arts, he is the author of the treatise Ars musicae ("The art of music") (ca. 1300), an attempt to describe the music of his time as it was practiced in and around Paris.

Almost one-third of Grocheio's treatise is devoted to liturgical and composed music. The rest is devoted to secular music, and Grocheio surveyed its new social importance in a systematic and pedagogical fashion. Grocheio writes, for example, that "a good fiddler generally performs every kind of cantus and cantilena [cantilène], and every musical form."

Johannes de Grocheio was also one of the first scholars to define a motet. He professed that the motet was "not intended for the vulgar who do not understand its finer points and derive no pleasure from hearing it: it is meant for educated people and those who look for refinement in art."

Grocheio departed from Boethius' taxonomy, which divided music into three categories between music of the world, human music, and instrumental music.

The sociology of music in Grocheio's treatise

Grocheio attempted to address the sociological functions of specific musical forms and genres, and touted music as a cure for the ailments of society, imbuing it with the power to restrain social vices. Grocheio believed that when the elderly, the laborers, and the middle classes sang of the hardships endured by the heroes of the chansons de geste, it helped them to bear their miseries, thus contributing to the welfare of the state. Narrative epics, Grocheio concluded, contributed to the stability of the city due to the fact that they encouraged citizens of all ages and stations to be satisfied with their lot in life.

Conversely, Grocheio believed that 'trouvère' songs inspired kings and noblemen to do great things and to be great: "This kind of song is customarily composed by kings and nobles and sung in the presence of kings and princes of the land so that it may move their minds to boldness and fortitude, magnanimity and liberality..."