The Thomas Jefferson Memorial is a presidential memorial in Washington, D.C. that is dedicated to Thomas Jefferson, an American Founding Father and the third president of the United States.

The neoclassical building was designed by John Russell Pope and completed in 1943. The memorial itself is composed of marble steps, a dome and a portico. The open-air building is in West Potomac Park, on the south shore of the Tidal Basin of the Potomac River. It is one of the main points in the area of the National Mall in the District of Columbia, forming a line with the Washington Monument and the White House. The Jefferson Memorial is managed by the National Park Service under its National Mall and Memorial Parks division.

President Franklin Roosevelt proposed a monument for Thomas Jefferson. There were monuments in Washington commemorating great United States presidents by the 1930s. On June 26, 1934, Congress passed a resolution to create a monument commemorating Jefferson.

The memorial was designed by John Russell Pope, who was also the architect of the original (west) building of the National Gallery of Art. The memorial's structure reflects characteristics of buildings designed by Jefferson such as his home, Monticello, and the Rotunda. Elements of Monticello and the Rotunda reflected his fascination with Roman architecture. The Jefferson Memorial bears some resemblance to the Pantheon of Rome. Under construction in 1940, as seen from the top of the Washington Monument

The cornerstone of the Memorial was laid on November 15, 1939. Daniel P. Higgins and Otto R. Eggers took over construction of the memorial as Pope had died two years earlier. The memorial was constructed with Vermont Danby Imperial marble for the exterior walls and columns and Tennessee pink marble was used for the interior floor. Georgian white marble was used for the interior wall panels, and Missouri gray marble for the pedestal. Indiana limestone was used in construction of the ceiling. The cost of construction was slightly more than $3 million.

The Jefferson Memorial was officially dedicated on April 13, 1943—the 200th anniversary of Jefferson's birth. It is one of the last American public monuments constructed in the Beaux-Arts tradition. The memorial was severely criticized even as it was being built. Adherents to the modernist argument believed that dressing twentieth century buildings like Greek and Roman temples constituted a "tired architectural lie." More than 60 years ago, Pope responded with silence to critics who dismissed him as part of an enervated architectural elite practicing "styles that are safely dead." As a National Memorial, it was administratively listed on the National Register of Historic Places on October 15, 1966.

The interior of the memorial has a 19-foot (5.8 meters) tall, 10,000-pound (5 tons) bronze statue of Jefferson by sculptor Rudulph Evans. The interior walls are engraved with passages from Jefferson's writings. Most prominent are the words which are inscribed around the monument near the roof: "I have sworn upon the altar of God eternal hostility against every form of tyranny over the mind of man." This sentence is taken from a September 23, 1800 letter by Jefferson to Dr. Benjamin Rush. 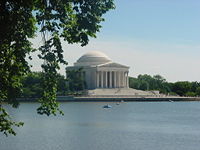 The Jefferson Memorial is located in Washington, D.C.’s West Potomac Park on the shore of the Potomac River Tidal Basin. The view is enhanced with the massed planting of Japanese cherry trees, which were a gift from the people of Japan in 1912.

The monument is not as prominent in popular culture as other Washington, D.C. buildings and monuments, possibly due to its location well removed from the National Mall and the Washington Metro transportation system.

The Jefferson Memorial hosts many events and ceremonies each year, including memorial exercises, the Easter Sunrise Service, and the annual National Cherry Blossom Festival.