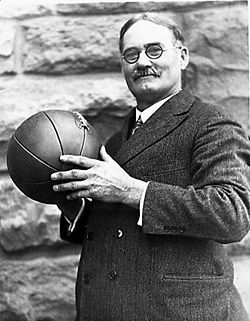 James A. Naismith, (November 6, 1861 – November 28, 1939) Bachelor of Arts, Master of Arts (postgraduate), Doctor of Medicine, and Doctor of Divinity, was the inventor of the sport of basketball. The majority of his 13 Rules of Basketball are in effect in the National Basketball Association (NBA) to this day. Naismith not only invented men's basketball, but was instrumental in teaching the game of basketball to women. Naismith was himself an outstanding athlete. He was also a successful coach who stamped his legacy on the game by training other successful coaches, such as "Phog Allen." He was elected a member of numerous Hall of Fames. He succumbed to heart trouble on November 28, 1939, but his legacy continues wherever the game of basketball was played.

James A. Naismith was born near Almonte, Ontario on November 6, 1861. James was the eldest son of Scottish immigrants John and Margaret Naismith. In 1869, at the age of eight, James moved with his family to Grand Calumet where his father began work as a saw hand. Tragedy struck at an early age as Naismith was orphaned at age nine, when his parents contracted typhoid fever while working in the milling community. With the death of their grandmother in 1872, the Naismith children, Annie, James and Robbie, were left under the care of their authoritarian uncle, Peter Young.

Growing up, Jim was assigned chores around the farm and worked in the woods. He learned to chop trees, saw logs, and drive horses. Jim learned early that honesty, initiative, independence, and ruggedness were all a necessity in life. Uncle Peter put great stock in reliability and self-reliance. When Jim was sent into the field or the woods with a team of horses, he was expected to do the assigned job without asking for help. If trouble arose, he was expected to take care of it himself.

Despite the grueling life of farm labor, James found the time to earn an education. He attended grade school in a one-room schoolhouse in Bennie's Corners. The walk from the farm to school was five miles. While he was known as a strong and adept boy in the neighborhood, his schoolwork always showed poor grades. Naismith's teacher, Mr. Thomas B. Caswell assisted him in reading, writing, arithmetic, mathematics, Latin, and other subjects; however, it was clear that James was only interested in athletics, where he stood head and shoulders above his peers.

On April 30, 1887, Naismith graduated from McGill University in Montreal, Quebec in the top ten of his class. After graduation, James enrolled in the largest theological school affiliated with McGill University, the Presbyterian College; however, he could not avoid his undying passion for athletics. As a result, Naismith bid goodbye to his hometown in 1890 and traveled to Springfield to enroll at the YMCA training school. The very next year, he invented the game of BasketBall.

Naismith, who became naturalized as an American citizen on May 4, 1925, married Maude Sherman in 1894 and they had five children together. In 1939 he was awarded his Doctor of Divinity from The Presbyterian College, Montreal. After Maude's death in 1937, he married Florence Kincade on June 11, 1939, less than six months before his own death, in Lawrence, Kansas, of a cerebral hemorrhage and heart trouble.

He has been honored extensively in his native country, Canada. He was the founding inductee when on February 17, 1968, the Naismith Memorial Basketball Hall of Fame, named in his honor, opened in Springfield, Massachusetts. He was also an inaugural inductee to the McGill University Sports Hall of Fame in 1996.

In 2005 James Naismith's grandson, Ian Naismith, planned on selling the original copy of the thirteen rules. The rules were passed down on Naismith's death to his youngest son, James Naismith, who was Ian's father. James lived in Corpus Christi, Texas.

Impact on the World

In 1891, while working as a physical education teacher at the YMCA International Training School in Springfield, Massachusetts, Naismith was asked to make a game that would not take up much room, was not too rough, and at the same time, could be played indoors. He had no idea he would invent what would become the most popular indoor sport in the United States.

Inspired by a Canadian game he played as a child in Canada called "Duck on a Rock," Naismith's game started December 15, 1891, with thirteen rules (modified versions of twelve of those are still used today), a peach basket nailed to either end of the school's gymnasium, and two teams of nine players. On January 15, 1892, Naismith published the rules for basketball. On December 21, 1891, the first ever game of basketball took place in Naismith's gym. The original rules did not include what is known today as the dribble. They initially only allowed the ball to be moved up the court via a pass. Following each "goal" a jump ball was taken in the middle of the court. Although it was not a rule, players would commonly use the dust of coal to cover the palms of their hands, allowing them to get a better grip on the ball. The coal palm was used up until the early 1930s. Also interesting was the rule concerning balls out of bounds—the first player to retrieve the ball received possession.

Basketball became a popular men's sport in the United States and Canada very quickly, and spread to other countries (International Basketball Federation) as well. Additionally, there were several efforts to establish a women's version with slightly modified rules. Naismith himself was impressed with how quickly women caught onto the game and remarked that they were quick to understand the nature of the teamwork involved. He observed some women playing at a college in Springfield, MA, and was instrumental in promoting the sport for women in New England. Naismith felt that it was appropriate to modify the rules somewhat to account for his perception of women. The men's sport was officially added to the Olympic Games program at the 1936 Summer Olympics in Berlin. There, Naismith handed out the medals to three North American teams; United States, for the Gold Medal, Canada, for the Silver Medal, and Mexico, for their Bronze medal win. Women's basketball finally became an Olympic event in Montreal during the 1976 Summer Olympics. Before this, basketball was previously played in the 1904 Summer Olympics as a demonstration sport.

13 Rules of Basketball (as written by James Naismith)

Naismith is the only Kansas coach to have a losing record (55-60) during his tenure at the school. Nevertheless, Naismith has one of the greatest coaching legacies in basketball history. Naismith coached Forrest "Phog" Allen, his eventual successor at Kansas, who went on to become one of the winningest coaches in U.S. college basketball history. The actual playing surface of Allen Fieldhouse in Lawrence, Kansas is named the James Naismith Court. Phog Allen was the college basketball coach of Dean Smith and Adolph Rupp, who are two of the winningest men's college basketball coaches, winning a combined total of six NCAA championships. Adolph Rupp was the college basketball coach of Pat Riley who is one of the winningest coaches in NBA history and has coached five teams to the NBA championship. Dean Smith went on to coach Hall of Famers' Larry Brown, Roy Williams, and arguably the greatest player in the history of basketball, Michael Jordan. In the late 1930s Naismith played a role in the formation of the National Association of Intercollegiate Basketball, which later became the National Association of Intercollegiate Athletics (NAIA).

In August 1936, while attending the 1936 Summer Olympics (Berlin Olympics), he was named honorary President of the International Basketball Federation.

Naismith was a star gymnast, lacrosse player and football player at McGill University, where he graduated among the top ten of his class with a B.A. Honors in 1887. In 1885-86 he won the Wicksteed Silver Medal as the gymnastics champion of the school's junior class. In his graduating year, he won the prestigious Wicksteed Gold Medal as the top athlete of the university's senior class.

Retrieved from https://www.newworldencyclopedia.org/p/index.php?title=James_A._Naismith&oldid=1009821
Categories:
Hidden category:
This page was last edited on 15 March 2018, at 15:19.
Content is available under Creative Commons Attribution/Share-Alike License; additional terms may apply. See Terms of Use for details.