The Masjid-i-Jahan Numa (Urdu: مسجد جھان نمہ), commonly known as the Jama Masjid of Delhi, is the principal mosque of Old Delhi in India. "Masjid-i-Jahan Numa" means "the mosque commanding a view of the world," and the name Jama Masjid refers to the weekly congregation observed on Friday (the yaum al-jum`a) at the mosque. The Mughal Emperor Shah Jahan, builder of the Taj Mahal, commissioned its construction. Five thousand craftsmen labored for six years to build the mosque. Completed in the year 1656 C.E., Jama Masjid constitutes one of the largest and best-known mosques in India. Shah Jahan enhanced the imposing grandeur of the edifice by placing it on high ground. The Badshahi Masjid in Lahore, built in 1673, closely resembles Jama Masjid.

Jama Masjid stands 80 meters (261 feet) tall, caped by three domes covered with gold. Two minarets rise 130 feet (40 meters), flanking the domes. Three flights of steps, from east, north, and south, enter the courtyard, a meeting place that can hold up to twenty-five thousand worshipers. The prayer hall measures 61 by 27.5 meters, accessed by eleven entrances. The mosque houses several relics in a closet in the north gate, including a copy of the Qur'an written on deer skin.

Jama Masjid was the result of the efforts of over 5,000 workers, over a period of six years.[1][2] The cost incurred on the construction in those times amounted to ten lakh (1 million) Rupees. Shah Jahan built several important mosques in Delhi, Agra, Ajmer, and Lahore. Its majesty is further enhanced because of the high ground that he selected for building this mosque. The architecture and design of the Badshahi Masjid of Lahore built by Shah Jahan's son Aurangzeb in 1673 is closely related to the Jama Masjid in Delhi.[3] 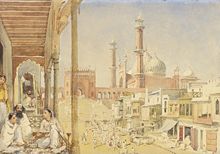 The mosque faces west. Open arched colonnades, each having a lofty tower-like gateway in the center, cover its three sides. The mosque, measuring 261 feet (80 m) in length and 90 feet (27 m) width, has a roof caped with three domes. They have alternating black and white marble striping, its topmost parts of the domes covered with gold. Two lofty minarets, standing 130 feet (40 m) high, have 130 steps. They are striped longitudinally with white marble and red sandstone, flanking the domes on either side. Three projecting galleries, separating the minarets, host open twelve-sided domed pavilions. On the back of the mosque, four small minarets stand crowned like those in the front.[5] 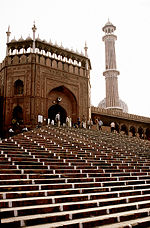 Under the domes of the mosque, is a hall with seven arched entrances facing the west and the walls of the mosque, up to the height of the waist, are covered with marble.[7] Beyond this is a prayer hall, which is about 61 by 27.5 meters (200.131 ft × 90.223 ft) , with eleven arched entrances, of which the centre arch is wide and lofty, and in the form of a massive gateway, with slim minarets in each corner, with the usual octagonal pavilion surmounting it. Over these arched entrances there are tablets of white marble, 4 feet (1.2 m) long and 2.5 feet (0.76 m) wide, inlaid with inscriptions in black marble. These inscriptions give the history of the building of the mosque, and glorify the reign and virtues of Shah Jahan. The slab over the center arch contains simply the words "The Guide!"[8]

Inside the Jama Masjid

The mosque stands on a platform approximately 5 feet (1.5 m) from the pavement of the terrace, three flights of steps leading to the interior of the mosque from the east, north, and the south. Covered with white and black marble ornamented to imitate the Muslim prayer mat, Jama Masjid has a thin black marble border marked for the worshipers, 3 feet (0.91 m) long and 1.5 feet (0.46 m) wide. 899 such spaces have been created in the floor of the mosque.

On April 14, 2006, two explosions rocked Jama Masjid.[9] The first explosion came at around 17:26, the second following around seven minutes later at around 17:33 (IST).[10] Thirteen people suffered injured in the blasts. The blasts took place on the first Friday after Milad un Nabi, Islamic prophet Muhammad's birthday. In celebration of the event, a larger than usual gathering of 1000 devotees filled the mosque at the time of the explosions. The blast left the mosque itself undamaged.