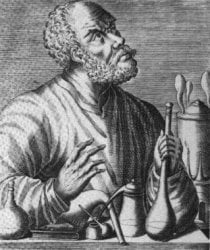 Jabir ibn Hayyan (c. eighth and early ninth centuries) was an Islamic thinker from the early medieval period to whom is ascribed authorship of a large number of alchemical, practical, and philosophical works. Many of these works were translated and distributed throughout the learning centers of medieval Europe under the latinized form of Jabir's name, Geber. Whether or not he was genuinely the author of all the works attributed to him, his contributions were substantial, laying the foundations of modern chemistry.

The two earliest biographical sources that mention Jabir are from the tenth century. The first, Notes of Abu Suaiman al-Mantiqi al-Sijistani, disputes the authorship of several works ascribed to him, and casts doubt on his very existence. Another work, the Katib al-Fihrist of Ibn al-Nadim, part biography and part bibliography, written around 987, ascribes a long list of works to Jabir and insists that he was a real personage. Ibn al-Nadim links Jabir with his teacher, the sixth shi'ite imam, Jafar ibn Muhammad al-Sadiq, who lived between 700 and 765. Others say his teacher was another Jafar, the Barmecide vizier Jafar ibn Yahya, who was put to death in 803, by the ruler Harun al-Rashid. Either of these hypotheses lead to the conclusion that Jabir's life straddled the eighth and ninth centuries.

There can be no doubt that works ascribed to Jabir, particularly under the latinized moniker, Geber, have had a profound influence on the development of chemical knowledge in the West, including as they do advanced chemical processes such as the manufacture of nitric and sulfuric acids and the introduction of the experimental method. Many of Jabir's works, however, are written in esoteric prose that are hardly decipherable in a scientific context. The authorship of some works, particularly those in Latin with no Arabic originals, are disputed by modern scholars, many of whom claim that the chemical knowledge they display is far ahead of what was known to ninth-century practitioners. Still, there are a minority who make a case for Jabir's authorship of all the works attributed to him.

Twentieth century scholar E.J. Holmyard attempts to piece together a life of Jabir from a variety of early sources and a knowledge of the history of the times. According to Holmyard, Jabir Ibn Hayyan was born in 721 or 722, in the town of Tus, in Khorasan, not far from the city of Meshed in modern Iran. His father, Hayyan, was of the Al-Azd tribe, originally of south Arabia, some members of which had resettled in Kufa. Hayyan became enmeshed in the political intrigues of his time, and was executed shortly after Jabir's birth.

Jabir's family fled to Arabia, where Jabir studied under the scholar Harbi al-Himyari. In later years, he became the disciple of Jafar al-Sadiq, a shi'ite imman connected with the Abbasids, who, under the caliphate of Harun al-Rashid, later assumed power in the region. Because his father had died supporting the Abbasids, Jabir was able to form a close association with the Barmecides, who acted as the caliph's ministers. He was thus able to practice medicine under the protection of the caliphate.

In one of his works, Jabir relates that he cured a handmaid belonging to the household of Yahya ibn Khalid, a Barmecide, by administering a specially prepared potion. For the caliph himself, Jabir wrote an alchemical work, The Book of the Blossom, which included information on experimental techniques. He also is said to have facilitated the acquisition of copies of Greek and Latin authors for translation into Arabic.

Jabir kept a working laboratory in Kufa, the ruins of which were discovered two hundred years after his death.

In 803, Jafar ibn Yahya was put to death and the Barmecides were banished after earning the disfavor of the Caliphate. Jabir fled to Kufa, where he is said to have lived long enough to persuade the succeeding Caliph, Al-Ma'mun, to nominate a successor of Jabir's choice. According to this tradition, Jabir would have died only after the naming of the successor, Ali al-Rida, in 917.

It is useful to differentiate the techniques, processes, and theories associated with the Arabic works ascribed to Jabir, and those of the Latin works under the authorship of Geber, Jabir's latinized name.

The works in Latin under the name of Geber include these important chemical processes (Von Meyer, 1906):

The works ascribed to Geber introduced improved laboratory equipment such as water baths, furnaces, and systems for filtration and distillation.

Jabir's works paved the way for most of the later Islamic alchemists, including Razi, Tughrai and al-Iraqi, who lived in the ninth, twelfth, and thirteenth centuries respectively. His books strongly influenced the medieval European alchemists and justified their search for the philosopher's stone, a symbol for the method by which the baser metals such as lead and tin could be transformed into gold. But they also provided medieval inestigators a new source of important and practical chemical knowledge.

In tandem with his leanings toward mysticism, Jabir recognized and proclaimed the importance of experimentation. "The first essential in chemistry," he declared, "is that you should perform practical work and conduct experiments, for he who performs not practical work nor makes experiments will never attain the least degree of mastery."

Jabir applied his chemical knowledge to the improvement of many manufacturing processes, such as making steel and other metals, preventing rust, engraving gold, dyeing and waterproofing cloth, tanning leather, and the chemical analysis of pigments and other substances. He developed the use of manganese dioxide in glass-making, to counteract the green tinge produced by iron — a process that is still used today. He noted that boiling wine released a flammable vapor, thus paving the way to Al-Razi's discovery of ethanol.

In the Middle Ages, Jabir's treatises on alchemy were translated into Latin and became standard texts for European alchemists. These include the Kitab al-Kimya (titled Book of the Composition of Alchemy in Europe), translated by Robert of Chester (1144). Marcelin Berthelot translated some of his books under the fanciful titles Book of the Kingdom, Book of the Balances, and Book of Eastern Mercury.

Alchemy was the study of ways to turn base metals such as tin or lead into Gold. While modern science has revealed the hurdles which any such attempt would be faced with, the state of knowledge from ancient times up until the nineteenth century, was not such as to have been an adequate impediment to the pursuit of alchemical studies. Many of Jabir's writings are devoted to alchemy, and his system, often couched in obscure phraseology, bore some unique characteristics compared to earlier authors on the same subject.

Jabir states in his Book of Stones (4:12), that, "The purpose is to baffle and lead into error everyone except those whom God loves and provides for." Some of his works were written in a manner that perhaps only the inner circle of his students would have understood. It is therefore difficult, at best, for the modern reader to understand these works. Because certain of his works appear to make no sense, the term gibberish is believed to have originally referred to his writings (Hauck, p. 19).

Jabir's alchemical investigations ostensibly revolved around the ultimate goal of takwin—the artificial creation of life. The Book of Stones includes several recipes for creating creatures such as scorpions, snakes, and even humans in a laboratory environment, which are subject to the control of their creator.

Ibn Hayyan was deeply religious, and repeatedly emphasized in his works that alchemy is possible only by subjugating oneself completely to the will of Allah and becoming a literal instrument of Allah on Earth, since the manipulation of reality is possible only for Allah. The Book of Stones prescribes long and elaborate sequences of specific prayers that must be performed without error alone in the desert before one can even consider alchemical experimentation.

Jabir's alchemical investigations were theoretically grounded in an elaborate numerology related to Pythagorean and Neoplatonic systems. The nature and properties of elements was defined through numeric values assigned the Arabic consonants present in their name, ultimately culminating in the number 17.

To Aristotelian physics, Jabir added the four properties of hotness, coldness, dryness, and moistness (Burkhardt, p. 29). Each Aristotelian element was characterised by these qualities: Fire was both hot and dry, earth cold and dry, water cold and moist, and air hot and moist. This came from the elementary qualities which are theoretical in nature plus substance. In metals two of these qualities were interior and two were exterior. For example, lead was cold and dry and gold was hot and moist. Thus, Jabir theorized, by rearranging the qualities of one metal, based on their sulfur/mercury content, a different metal would result (Burckhardt, p. 29). This theory appears to have originated the search for al-iksir, the elusive elixir that would make this transformation possible—which in European alchemy became known as the philosopher's stone.

Only a few of Jabir's works have been edited and published, and fewer still are available in translation. Scholars generally admit that much more research needs to be done to understand the breadth and depth of Jabir's contribution.

The writings of Jabir Ibn Hayyan can be divided into four categories:

Works ascribed to Jabir under his Latinized name, Geber, include:

The consensus among scholars who have studied the body of work attributed to Jabir is that they could not all have been written by him. Some argue that one man could not have written that much material even in a lifetime. Others note stylistic differences between Jabir's work in Arabic, and the Latin works of Geber. The content of the Gerber works are said to reflect a state of knowledge closer to the end of the fourteenth century than to the eighth and ninth centuries, when Jabir is thought to have been active. The modern criticism of this body of work was begun by Berthelot in the late nineteenth century, and has continued to the present. Holmyard expressed a dissenting opinion, in that he believed the question of whether the Latin works were by Jabir should be left open.