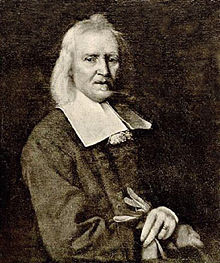 Izaak Walton (August 9, 1593 - December 15, 1683) was an English biographer, who is best known for The Compleat Angler, a classic guide to the joys of fishing with over 300 new printings. It combines practical information about angling with fishing folklore. Born in Stafford, Walton moved to London, where he was a successful businessman. A supporter of the Royalist cause, after the English Civil War Walton retired and spent the final 40 years fishing, visiting friends, and writing.

Despite his modest education, Walton read widely and associated with noted writers, clergymen, and scholars. Until 1643, he lived in the parish of St. Dunstan, where John Donne was a vicar, and the two become friends. When Sir Henry Wotton, a poet and provost of Eton, died, Walton continued Wotton's biography of Donne. Walton also wrote other biographical works about such persons as the poet and Walton's fishing companion, George Herbert; Robert Sanderson, bishop of Lincoln; Wotton; and theologian Richard Hooker.

Associations such as the Izaak Walton League draw upon Walton's glimpses of an idyllic and now-lost rural life to promote the preservation of fishing streams. Walton's The Compleat Angler remains an inspiration to fishermen throughout the world today.

Walton was born at Stafford, England. His father, who was an innkeeper, died before Izaak was three. His mother then married another innkeeper. Walton probably had some schooling in Stafford, but when he moved to London he was apprenticed to a cloth merchant and did not continue his education.

In the 1610s, he was a proprietor of an ironmonger's shop. In 1618, he became a freeman of the ironmonger's company, eventually making himself prosperous through his own drapery business. In 1626, Walton married Rachel Floud. She was a relative of Archbishop Cranmer, and Walton started to move in clerical circles. The couple had seven children, who all died young. Rachel herself died in 1640.

During the English Civil War, Walton supported Charles II against the Puritans under Oliver Cromwell. After the Royalist defeat at Marston Moor, Walton retired, about 1644. "I have laid aside business, and gone afishing," he wrote.

The last 40 years of his Walton's long life seem to have been spent in leisure, visiting eminent clergymen and others who enjoyed fishing, compiling the biographies of congenial spirits, and collecting stories and information in enlarged editions of his famous treatise.

His second marriage was with Ann Ken in 1646. Walton had bought some land near his birthplace in Stafford and went to live there. However, in 1650 he was again living in Clerkenwell. The first edition of his famous book, The Compleat Angler was published in 1653.

After the Restoration of the monarchy in 1660, and the death of his second wife in 1662, Walton lived at Farnham Castle as permanent guest of George Morley, the bishop of Winchester. After 1662, he found a home at Farnham Castle with George Morley, bishop of Winchester, to whom he dedicated both his Life of George Herbert and his biography of Richard Hooker. From time to time he visited Charles Cotton in his fishing house on the Dove River.

Walton died in Winchester on December 15, 1683. He was buried in the Winchester Cathedral, where today there is a glass painting which portrays him reading a book and fishing. 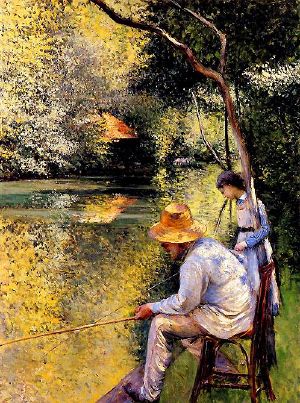 The Compleat Angler was published in 1653, but Walton continued to add to it for a quarter of a century. The book is enlivened by occasional songs, ballads, quotations from several writers, and glimpses of an idyllic and now-lost rural life. The story is of three sportsmen: a fisherman (Piscator, who is Walton himself), a huntsman (Venator), and a fowler (Auceps). They travel along the river Lea on the first day in May and discuss the relative merits of their favorite pastimes.

"Doubtless God could have made a better berry [than the strawberry], but doubtless God never did," Walter wrote, "and so, if I might be judge, God never did make a more calm, quiet, innocent recreation than angling."

Walton drew his work on Nicholas Breton's (c. 1545-1626) fishing idyll Wits Trenchmour (1597). The second edition was largely rewritten, and in the fifth edition Walton wrote about fly-fishing on the river Dove, although he himself had little experience in this form of fishing. The last edition was published in 1676, and included additional material by Charles Cotton and Colonel Robert Venables's The Experienced Angler, or Angling Improved.

Walton's work became one of the most reprinted books in the history of British literature.

Although The Compleat Angler was not Walton's first literary work, his leisurely labors as a biographer seem to have grown out of his devotion to angling. It was probably as an angler that he made the acquaintance of Sir Henry Wotton, a poet and provost of Eton.

When Wotton died in 1639, Walton also undertook a biography on his life. It was finished in 1642, and published in 1651. His life of theologian Richard Hooker was published in 1662, that of poet George Herbert in 1670, and that of Bishop Robert Sanderson of Lincoln in 1678.

Walton also memorialized his friends Sir John Skeffington and John Chalkhill, editing and adding prefaces to Skeffington's Hero of Lorenzo in 1652 and Chalkhill's Thealma and Clearchus in 1683, a few months before his own death. His poems and prose fragments were collected in 1878 under the title of Waltoniana.

Izaak Walton epitomized the gentleman angler of British culture, and his book continues to inspire fishermen the world over today. The best-known old edition of the Angler is J. Major's (2nd ed., 1824). The book was edited by Andrew Lang in 1896, and various modern editions have appeared. The standard biography is written by Sir Harris Nicolas, prefixed to an edition of the Angler (1836). There are notices also, with additional scraps of fact, annexed to two American editions—Bethune's (1847) and Dowling's (1857). A book entitled Walton's Lives, by G. Sampson, appeared in 1903 as did Izaak Walton and his Friends, by S. Martin.

At least two organizations have been inspired by and named after Izaak Walton. Inspired by The Compleat Angler, advertising mogul and land developer Barron Collier founded the Izaak Walton Fishing Club in 1908 at his Useppa Island resort near Fort Myers, Florida. It was considered one of the most exclusive sporting clubs in the world. The Izaak Walton League is an American association of sportsmen that was formed in 1922 in Chicago, Illinois to preserve fishing streams. The Izaak Walton Hotel stands, appropriately, on the Staffordshire bank of the Dove River, at the southern end of Dovedale.

Retrieved from https://www.newworldencyclopedia.org/p/index.php?title=Izaak_Walton&oldid=1009657
Categories:
Hidden category:
This page was last edited on 10 March 2018, at 23:10.
Content is available under Creative Commons Attribution/Share-Alike License; additional terms may apply. See Terms of Use for details.