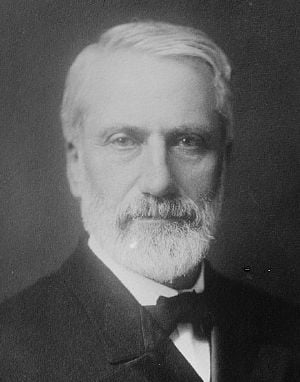 Isaac Kaufmann Funk (Sept. 10, 1839 - April 4, 1912) was an American Lutheran minister, editor, lexicographer, publisher, and spelling reformer. He was the co-founder of Funk & Wagnalls.

Funk founded the I.K. Funk & Company in 1876. The firm's first publication was the Metropolitan Pulpit. In 1877, Adam Willis Wagnalls, one of Funk's classmates at Wittenberg College, now Wittenberg University, joined the firm as a partner. The two changed the name of the firm to Funk & Wagnalls Company in 1890.

The publication of The Literary Digest in 1890 marked a change for the firm to a publisher of general reference dictionaries and encyclopedias. Norman Rockwell paintings served as covers for The Literary Digest until 1938, when it merged with the Review of Reviews, only to fail soon after.

Funk was a Prohibitionist and founded The Voice, an organ of the Prohibitionist party. He was also involved in psychical research and was a member of a group formed to urge the simplification of English spelling in 1906.

Before the advent of mass communication his encyclopedias were the source of many hours of entertainment for the curious, his dictionaries were the standard for the study of the English language, and his literary magazines were pioneering efforts in intellectual stimulation.

Funk was born on September 10, 1839, in the town of Clifton, Ohio. He attended Wittenberg College (Now Wittenberg University) and Wittenberg Theological Seminary, both in Springfield, Ohio. Upon his graduation in 1860, he was ordained as a Lutheran pastor, and served pastorates in New York, Indiana, and his home state of Ohio. He made an extensive tour through Europe, northern Africa, and Asia Minor in 1872.

In 1876 he founded the publishing firm of I.K. Funk & Company with two magazines, The Metropolitan Pulpit and The Voice.

The following year he teamed with Wittenberg classmate, Adam Willis Wagnalls, a lawyer and accountant. They began by publishing pamphlets and booklets for the clergy, mostly commentaries on the Bible. For more general audiences, they issued a reprint of Charles H. Spurgeon's The Treasury of David, in seven volumes, issued by subscription for $1.00 each. The success of this led to the more ambitious 27 volume set of Joseph D. Parker's People's Bible, also sold by subscription. This in turn led to the Encyclopedia of Religious Knowledge by J. J. Herzog and Philip Schaff.[1]

The big break for the two men came in 1884 when Funk, watching the explosion of the so-called Second Paperback Revolution, thought there might be a market for religious paperbacks. The first was John Ploughman's Talks by Charles Haddon Spurgeon. Next came Imitation of Christ by Thomas a Kempis, followed by Thomas Carlyle's Critical and Miscellaneous Essays and Thomas Babington Macaulay's Lord Macaulay's Essays.

In 1886, Funk changed the font size to give his series a more distinctive look. At the same time, he aggressively marketed the series as a subscription service for $4.00 a year, a subscriber would receive a book every four weeks. He sold over 16,000 subscriptions without knowing what titles he would include in the series.[1]

In 1890 the name was changed to Funk & Wagnalls Company, to more accurately reflect Wagnalls' partnership. In that same year, Funk published The Literary Digest, a departure from the religious works earlier in his career.[2]

Funk's most important achievement was his The Standard Dictionary of the English Language published in 1893. He worked with a team of more than 740 people. His aim was to provide essential information thoroughly and simply at the same time. In order to achieve this he placed current meanings first, archaic meanings second, and etymologies last.[1]

He was editor-in-chief of the various publications of his company that in addition to The Standard Dictionary, included the The Jewish Encyclopedia, The Metropolitan Pulpit (later the Homiletic Review) The Voice. and The Missionary Review.

After Funk died in 1912, the publishing house eventually became a subsidiary of Thomas Y. Crowell Co.

In 1906 Funk became a member of the Simplified Spelling Board that consisted of 30 prominent authors, editors, scholars and other distinguished public figures.

The Board was founded and funded by Andrew Carnegie because he believed that simplifying English spelling would help make English the world language of the future and thus make it a force for world peace.[3]

Funk gave currency to some of the new spellings by including them in his Standard Dictionary. "Give" and "givn" appeared along with "give" and 'given', but the meaning of the words was referred to the more familiar forms. Also, in the word "infinitive" the final "e" is separated from the rest of the word by a single parenthesis mark, which meant that "the joint rules of the Philological Societies required the dropping of the letter. The word "slapt" appeared with the definition as "slapped" and it was the same way with "tho" and "thru".[4]

Funk was nationally known for his interest in communication with the dead. He asserted that he had conversations with the spirits of his friends, Henry Ward Beecher, Rev. Dr. George H. Hepworth, once pastor of the Church of the Unity in Boston; and Richard Hodgson, president of the Society for Psychical Research.

He was the author of The Next Step in Evolution, The Widow's Mite and Other Psychic Phenomena, and The Psychic Riddle.

The rights to publish the encyclopedia were obtained by the Unicorn Press, later known as the Standard Reference Work Publishing Co. By 1953 that firm began to sell the encyclopedia and other educational materials through supermarket continuity promotions, enjoying considerable success with this marketing technique.

In 1965 Funk & Wagnalls Co. was purchased by the Reader’s Digest Association.

The company (by this time Funk & Wagnalls, Inc.) was acquired by Dun & Bradstreet in 1971. It retained Funk & Wagnalls New Encyclopedia, but all other properties were transferred to other publishers in later corporate mergers. The firm was purchased by its senior officers in 1984. They sold it to the Field Corporation in 1988. In 1991 it was sold to K-III Holdings, Inc.; and in 1993 it acquired The World Almanac and related properties. In 1996 the corporate name was changed to K-III Reference Corp., which acquired Facts on File News Services. In 1997 the corporate name was changed to PRIMEDIA Reference, Inc., and the company acquired Gareth Stevens, Inc., a publisher of juvenile books for schools and libraries. In 1999 the company was sold to Ripplewood Holdings L.L.C. and was renamed World Almanac Education Group, Inc. In the 1990s electronic versions of Funk & Wagnalls New Encyclopedia, The World Almanac, Facts on File World News Digest, and related publications were available, on disk and online, both for consumers and for schools, libraries, and businesses.[5]

Retrieved from https://www.newworldencyclopedia.org/p/index.php?title=Isaac_Kaufmann_Funk&oldid=1009557
Categories:
Hidden category:
This page was last edited on 6 March 2018, at 19:38.
Content is available under Creative Commons Attribution/Share-Alike License; additional terms may apply. See Terms of Use for details.