Interoperability refers to the ability of diverse systems and organizations to work together (inter-operate). The term is often used in terms of technical systems engineering, or alternatively in a broader sense that accounts for social, political, and organizational factors that impact system to system performance. "Interop" is also the name of several annual networking product trade shows.

Interoperability makes communication and data exchange between systems possible, and it is vital for system integration or collaboration of sub-systems. Today, system integration is rapidly taking place at various levels and in various fields. Interoperability becomes an issue when economic interests of developers and the public are in conflict. For example, the European Commission accused Microsoft of abusing market power by developing systems that were not interoperable with non-Microsoft systems.

One successful example of interoperability is the development of MARC standards (standards for MAchine-Readable Cataloging) across library communities. In 1968, the Library of Congress (U.S.) developed the standards for electronic bibliographic information, which became the international standard for inter-library operations.

The IEEE (Institute of Electrical and Electronics Engineers) defines interoperability as:

the ability of two or more systems or components to exchange information and to use the information that has been exchanged.[1]

Interoperability exists in various ways: Hardware, software, technology, metadata, and others. In today's information environment, it is important to set common standards that all system producers can comply with in a given field.

Many organizations are dedicated to interoperability. All have in common that they want to push the development of the world wide web towards the semantic web. Some concentrate on eGovernment, eBusiness or data exchange in general. In Europe, for instance, the European Commission and its IDABC (Interoperable Delivery of European eGovernment Services to public Administrations, Businesses and Citizens) program issue the European Interoperability Framework. They also initiated the Semantic Interoperability Centre Europe (SEMIC.EU). In the United States, the government CORE.gov service provides an environment for component development, sharing, registration, and reuse.

In telecommunication, the term can be defined as:

In two-way radio, interoperability is composed of three dimensions: 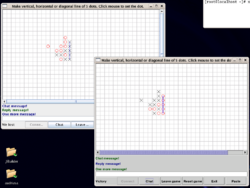 Interoperability: playing the two role network game, when one of the player clients (top left) runs under Sun Microsystems and another under GNU Classpath with JamVM. The applications execute the same bytecode and interoperate using the standard RMI-IIOP messages for communication.

According to ISO/IEC 2382-01, Information Technology Vocabulary, Fundamental Terms, interoperability is defined as follows: "The capability to communicate, execute programs, or transfer data among various functional units in a manner that requires the user to have little or no knowledge of the unique characteristics of those units."[2]

Note that the definition is somewhat ambiguous because the user of a program can be another program and, if the latter is a portion of the set of program that is required to be interoperable, it might well be that it does need to have knowledge of the characteristics of other units. This definition focuses on the technical side of interoperability. On the other hand, it has also been pointed out that interoperability is often more of an organizational issue. Interoperability raises issues of ownership, labor relations, and usability. In this context, a more apt definition is captured in the term "business process interoperability."

Interoperability can have important economic consequences, such as network externalities. If competitors' products are not interoperable (due to causes such as patents, trade secrets, or coordination failures), the result may well be monopoly or market failure. For this reason, it may be prudent for user communities or governments to take steps to encourage interoperability in various situations. In the United Kingdom, for example, there is an eGovernment-based interoperability initiative called e-GIF. As far as user communities are concerned, Neutral Third Party is currently creating standards for business process interoperability.

New technologies are being introduced in hospitals and labs at an ever-increasing rate, and many of these innovations have the potential to interact effectively if they can be integrated effectively. The need for “plug-and-play” interoperability—the ability to take a medical device out of its box and easily make it work with one’s other devices—has attracted great attention from both health care providers and the health care industry.

Conditions in the biomedical industry are still in the process of becoming conducive to the development of interoperable systems. A potential market of interested hospitals exists, and standards for interoperability are being developed. Nevertheless, it seems that current business conditions do not encourage manufacturers to pursue interoperability. Only sixteen to twenty percent of hospitals, for example, use electronic medical records (EMR). With such a low rate of EMR adoption, most manufacturers can get away with not investing in interoperability. In fact, not pursuing interoperability allows some of them to tout the inter-compatibility of their own products while excluding competitors. By promoting EMR adoption, companies such as Intel hope to create an environment in which hospitals will have the collective leverage to demand interoperable products.

eGovernment interoperability refers to the collaboration of cross-border services for citizens, businesses and public administration. Exchanging data can be challenging due to language barriers, different specifications of formats and varieties of categorizations.

If data is interpreted differently, collaboration is limited and inefficient. Thus eGovernment applications must exchange data in a semantically interoperable manner.

Interoperability is an important issue for law enforcement, fire fighting, EMS (Emergency medical services), Earthquake Early Warning, and other public health and safety departments, because first responders need to be able to communicate during wide-scale emergencies. Traditionally, agencies could not exchange information because they operated on widely disparate hardware that was incompatible. Agencies' information systems such as computer-aided dispatch systems (CAD) and records management systems (RMS) functioned largely in isolation, so-called "information islands." Agencies tried to bridge this isolation with inefficient, stop-gap methods while large agencies began implementing limited interoperable systems. These approaches were inadequate and the nation's lack of interoperability in the public safety realm become evident during the September 11 attacks on the Pentagon and World Trade Center (New York City) structures in 2001. Further evidence of a lack of interoperability surfaced when agencies tackled the aftermath of the Hurricane Katrina disaster in the U.S. in 2005.

In contrast to the overall national picture, some states, including Utah, have already made great strides forward. The Utah Highway Patrol and other departments in Utah have created a statewide data-sharing network using technology from a company based in Bountiful, Utah, FATPOT Technologies.

The State of Washington seeks to enhance interoperability statewide. The State Interoperability Executive Committee (SIEC), established by the legislature in 2003, works to assist emergency responder agencies (police, fire, sheriff, medical, hazmat, and so on) at all levels of government (city, county, state, tribal, federal) to define interoperability for their local region.

The U.S. government is making a concerted effort to overcome the nation's lack of public safety interoperability. The Department of Homeland Security's Office for Interoperability and Compatibility (OIC) is pursuing the SAFECOM and CADIP programs, which are designed to help agencies as they integrate their CAD and other IT systems.

The OIC launched CADIP in August 2007. This project will partner the OIC with agencies in several locations, including Silicon Valley. This program will use case studies to identify the best practices and challenges associated with linking CAD systems across jurisdictional boundaries. These lessons will create the tools and resources public safety agencies can use to build interoperable CAD systems and communicate across local, state, and federal boundaries.

In countries such as Japan, Taiwan, and Mexico, where earthquakes are frequent, Earthquake Warning Systems have been established.[3] An Earthquake Warning System is a system of accelerometers, communication, computers, and alarms that is devised for regional notification of a substantial earthquake while it is in progress. This is not the same as earthquake prediction, which is currently incapable of producing actionable event warnings. Japan has some of the most advanced systems in the world, one of which was put to practical use in 2006; its ability to warn the general public was installed on October 1, 2007.[4] When the sign of Earthquake is detected, the warnings are immediately issued by the Japan Meteorological Agency. The warning is then transmitted to all key agencies in the area and broadcast through TV, radio, cellular phone, internet, home intercom, and other communication medium.

The purpose of an Earthquake Early Warning is to mitigate damages by an earthquake. They allow people to take measures to protect themselves at home or at work. Since time is a crucial factor, all networks must be interoperatable with maximum speed and efficiency.

In the latter half of the twentieth century, libraries conducted massive data migration from the traditional card system (bibliographic information about a book is written an index card) to computerized information systems. The Library of Congress (U.S.) took the lead in setting the standard by starting the MARC Standards (standards for MAchine-Readable Cataloging) project in 1965. The Library of Congress, led by a project leader Henriette Avram, completed the project in 1968. MARC standards provide the protocol by which computers read, interpret, exchange, and use bibliographic information. Furthermore, MARC standards also became the international standard. Thus, billions of bibliographic items of information in tens of thousands of libraries now exist in a computer based information system with a uniform format.

Each of these has an important role in reducing variability in intercommunication software and enhancing a common understanding of the end goal to be achieved.

Interoperability as a question of power and market dominance

Recent Microsoft efforts around interoperability may indicate a shift in their approach and level of commitment to interoperability. These efforts including the migration of Microsoft Office file formats to ECMA Office Open XML, and several partner interoperability agreements, most notably their recent collaboration agreement with Novell.[5]

Interoperability has also surfaced in the Software patent debate in the European Parliament (June/July 2005). Critics claim that because patents on techniques required for interoperability are kept under RAND (reasonable and non discriminatory licensing) conditions, customers will have to pay license fees twice: Once for the product and, in the appropriate case, once for the patent protected program the product uses.

Retrieved from https://www.newworldencyclopedia.org/p/index.php?title=Interoperability&oldid=1009517
Categories:
This page was last edited on 4 March 2018, at 22:42.
Content is available under Creative Commons Attribution/Share-Alike License; additional terms may apply. See Terms of Use for details.