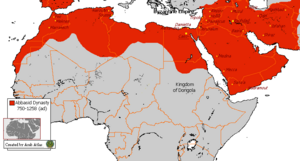 Muhammad ibn Ishaq ibn Yasar, or simply Ibn Ishaq (Arabic: ابن إسحاق, meaning "the son of Isaac") (died 767, or 761 (Robinson 2003, p. xv)) was an Arab Muslim historian. He collected oral traditions that formed the basis of first biography of the Islamic prophet Muhammad. This biography usually called Sirat Rasul Allah (Life of Allah's Messenger). This is one of the most important sources not only for the biography of Muhammad but also for the history of early Islam. Unlike the collection of hadith, which technically carry greater authority, this is a connected narrative and it is therefore also of use in identifying the original context in which different verses of the Qur’an were first recited. One the one hand, the biography shows signs of what some regard as a myth-making process and cannot be considered wholly reliable. On the other hand, apart from those scholars (Wansbrough 2004) who regard the whole narrative as a much later “salvation history” back-projected as history, most scholars accept much of the chronology and many of the details contained in Ibn Ishaq’s text.

According to Guillaume (pp. xiii-xiv), who translated his Sirah, Ibn Ishaq was born circa AH 85, or roughly 704 C.E., in Medina. He was the grandson of a man, Yasar, who had been captured in one of Khalid ibn al-Walid's campaigns and taken to Medina as a slave. Yasar converted to Islam and was freed. Yasar's son Ishaq was a traditionist, who collected and recounted tales of the past. Muhammad ibn Ishaq was thus carrying on the work of his father.

At the age of 30, he traveled to the Islamic province of Egypt to attend lectures given by the traditionist Yazid ibn Abu Habib. He later traveled eastwards, towards what is now Iraq. There, the new Abbasid dynasty, having overthrown the Umayyad caliphs, was establishing a new capital at Baghdad. Ibn Ishaq moved to the capital and likely found patrons in the new regime (Robinson, 27). He died in Baghdad in 767 C.E.

Ibn Ishaq wrote several works, none of which survive. His collection of traditions about the life of Muhammad survives mainly in two sources:

According to Donner, the material in Ibn Hisham and al-Tabari is "virtually the same" (Donner, 132). However, there is some material to be found in al-Tabari that was not preserved by Ibn Hisham. The notorious tradition of the Satanic Verses, in which Muhammad is said to have added his own words to the text of the Qur'an as dictated by an angel and been rebuked, is found only in al-Tabari.

The English-language edition of Ibn Ishaq currently used by non-Arabic speakers is the 1955 version by Alfred Guillaume. Guillaume combined Ibn Hisham and those materials in al-Tabari cited as Ibn Ishaq's whenever they differed or added to Ibn Hisham, believing that in so doing he was restoring a lost work. The extracts from al-Tabari are clearly marked, although sometimes it is difficult to distinguish them from the main text (only a capital "T" is used).

Ibn Ishaq’s Sirah, the Life of Muhammad and the Myth-making process

Wansbrough among others regards the standard life of Muhammad as a later construct, a “salvation history” put together, as in his view was the Qur’an, from a variety of different sources and over a 200 year period. Many other scholars accept the outline, and the chronology, of Ibn Ishaq’s Sirah although some dates are regarded as safer than others and there is discussion about the order in which some events took place. Several aspects of Ibn Ishaq’s work suggest that he was aware of some Christian criticism of Muhammad, such as that his mission “lacked certification” because he had not performed any miracles. The Qur’an appears to deny that Muhammad needed to support his mission with any miracle other than itself (Q2: 23; 29: 50). Ibn Ishaq reports miracles but he also often adds, “that only God knows whether a particular statemenyt is true or not.” or says that “is was alleged” (Guillaume, xic). After narrating the story of Muhammad’s Night Journey and Ascension, which some Muslims regard as an actual historical happening but some interpret allegorically, he writes, “Only God knows how revelation came and he saw what he saw … but either he was awake or asleep, it was all true and it actually happened” (Guillame, 183). He also recounts that when Muhammad first described this experience he was advised not to talk about it else people would call him a liar ( Guillame, 184). Ibn Ishaq’s opening sentence, too, resembles the Gospel of Mark, “this book is the biography of the Apostle of God” (Guillame, 3) followed by a genealogy (tracing Muhammad’s ancestry back to Adam by way of Ishmael and Abraham, while various signs and wonders accompany Muhammad’s birth, such as a camel always having enough milk to feed him while he was being nursed in the desert (Guillame, 71). Muhammad is briefly a shepherd since “there is no prophet but who has shepherded sheep,” which may be after the fact invention to stress similarity with Moses, whom Muslim believe predicted Muhammad at Deuteronomy 18: 18 (cited by Ibn Ishaq, p 160). On page 70, a Jew sights a star under which Ahmad is to be born, which smacks of the Gospel story of the wise men. When Aminah (his mother) conceived, a light shone “forth from her by which she could see the castles of Basra” (Guillame, 69). Events relating to pre-Islamic history are related from page 1 to page 69 of the text, which tells the story of Muhammad’s birth. Almost all that is known of pre-Islamic Arabian history is from such a source as this one, that is, a Muslim text.

On page 82, Khadijah, the rich widow for whom Muhammad worked, proposed marriage. Between pages 84 and 87, Muhammad, renowned for his honesty, acts as umpire in the rebuilding of the Ka’bah. Early incidents in Muhammad’s life include his meeting with Christyian monks while on a trading mission in Syria with his uncle. Christian critics would attribute these monks with the credit for inventing Islam as well as the “opening of the heart” incident (72). The revelation of the first chapter (96) of the Qur’an is related on pp 104-107. The hijrah, or migration, begins on p. 222. The Battle of Badr, with much poetry in honor of the slain and of the heroes of the Battle, is between page 289 and 360. The story of the defeat at Uhud is told from 370 to 426, again with long lists and much poetry. The building of the defensive Trench, during which miracles of confirmation occur, takes up pages 450 to 460. The events that lead up to Mecca’s occupation begin on page 678 and end at 690, which is the last page of the text. Dates derived from this account, such as 610 as the date of the first revelation and 570 as Muhammad’s birth, are regarded as the result of a process by which the writer wanted to make Muhammad 40 when he started his prophetic career. The date of 622 for the migration is thought safer, since it became the baseline of the Islamic calendar although even the hijrah is rejected by some skeptical scholars as an actual historical event.

Retrieved from https://www.newworldencyclopedia.org/p/index.php?title=Ibn_Ishaq&oldid=979815
Categories:
Hidden category:
This page was last edited on 30 March 2014, at 22:37.
Content is available under Creative Commons Attribution/Share-Alike License; additional terms may apply. See Terms of Use for details.