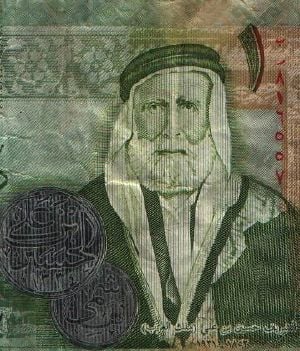 Hussein bin Ali (1852 – 1931) (حسین بن علی, Ḥusayn bin ‘Alī) was the Sharif of Mecca, and Emir of Mecca from 1908 until 1917, when he proclaimed himself king of Hejaz, which received international recognition. His family had ruled the Hejaz since 1201. His vision was of a restored Arab State, stretching from Yemen to Syria. This would be governed according to Islamic principles, including "the full protection and inclusion of ethnic religious minorities."[1]

In 1924, he further proclaimed himself Caliph of all Muslims. He ruled Hejaz until 1924, when, defeated by Abdul Aziz al Saud, he abdicated the kingdom and other secular titles to his eldest son Ali. Two sons were appointed kings of Iraq and of Jordan by the British following the Paris Peace Conference, 1919 and the division of the former Ottoman Empire among the victors as League of Nations mandated territories. Hussein was bitterly disappointed that the British failed to defend him against the Saudi rebellion. He retired to Cyprus. His heirs in Jordan, however, have perpetuated what appears to have been a long Hashemite tradition (his family are known as the Hashemites) of practicing an inclusive form of Islam that attempts to bridge divides and reconcile differences. It is no accident that his heirs are in the forefront of inter-religious dialogue and peace-building. On July 6, 2005, the King of Jordan sponsored the Amman declaration. This condemns terrorism and the practice of denouncing Muslims in good standing with any recognized school of Islam (Sunni or Shi'a) as apostates.[2]

Hussein bin Ali was born in Istanbul, Ottoman Empire and was the last of the Hashemite rulers over the Hejaz to be appointed by the Ottoman Empire. Until 1908, when he was appointed Sharif, Hussein and his sons were kept in Istanbul by the Ottoman caliph, who appears to have wanted to keep them close at hand, since he was aware of increased Arab resistance to continued Ottoman domination. Many Arabs did not consider the Ottoman caliphate legitimate and thought that Arabia, not Turkey, should lead the Muslim world.

At the start of World War I, Hussein was initially allied with the Ottomans and Germany. Evidence that the Ottoman government was planning to depose him at the end of the war soured this alliance, and he started to consider rebellion. He and his sons were encouraged in this enterprise by the British military envoy, T. E. Lawrence. He was commissioned to secure Arab aid against Turkey, and was authorized to make certain promises of territory after the war. Hussein interpreted this promise to mean that he would be rewarded with a large Arab state, stretching more or less from Yemen in the South to Syria in the North. No official treaty was ever signed and it has been alleged that Lawrence did not have the authority he thought he had, or acted as if he had. However, official correspondence between Hussein and the British High Commissioner in Egypt Sir Henry McMahon clearly indicates that some territorial award was promised:

We declare once more that His Majesty's Government would welcome the resumption of the Khalifate by an Arab of true race. With regard to the questions of limits and boundaries, it would appear to be premature to consume our time in discussing such details in the heat of war ... (August 15, 1915).

Britain was to have an exclusive trade relationship with the new Arab entity. However, while McMahon did not specify borders, he did indicate that certain areas would be excluded and that the interests of France in the region would also have to be taken into account.[3]

Lawrence penned the following description of Hussein at this time:

Sherif Hussein (Saynida as they called him) was outwardly so clean and gentle mannered as to seem weak; but this appearance hid a crafty policy, deep ambition, and an un-Arabian foresight, strength of character and obstinacy.

Lawrence also described the Sharif (or Sherif) as a "modernist." However, this exchange of letters convinced Hussein that his assistance on the side of the Triple Entente would be rewarded by an Arab empire encompassing the entire span between Egypt and Persia, with the exception of imperial possessions and interests in Kuwait, Aden, and the Syrian coast. He delegated his sons Feisal and Abdullah to work with the British, and launched the 1916 Arab Revolt against the Ottomans. With Arab help, the British defeated the Turks in the Middle East, capturing Jerusalem in December 1917.

Hussein had expected his promised state to stretch continuously across the region, and certainly expected it to include Palestine. McMahon later indicated that he had never envisaged that Palestine would be part of the Arab entity. In a letter to the London Times on July 23, 1937, wrote:

I feel it my duty to state, and I do so definitely and emphatically, that it was not intended by me in giving this pledge to King Hussein to include Palestine in the area in which Arab independence was promised. I had also every reason to believe at the time that the fact that Palestine was not included in my pledge was well understood by King Hussein.[4]

In a meeting on January 3, 1919 between Hussein's son, Feizal, the future King of Iraq, and Haim Weizman, later Israel's first President, an agreement was signed establishing cordial relations between Arabs and Jews in the Middle East. Weizman knew that Arab support would significantly help the process of increased Jewish settlement in Palestine. Faisal agreed to support Jewish settlement in return for Jewish aid in establishing the infrastructure of what he believed would be a very large Arab state. Prudency suggested that the international Zionist movement could prove to be a useful ally, given the skills and wealth of many of its members. The alliance was short lived. The Balfour Declaration of 1917 committed Britain to assisting Jews in establishing a homeland in Palestine, while the Sykes-Picot Agreement of 1916 between Britain and France drew up a very different territorial distribution of the Middle East in which Syria, expected by Hussein, would go to France, while Britain would get Palestine and other areas.[5] When this distribution of territory started to become public knowledge, both Lawrence and Hussein felt betrayed.

At the Paris Peace Conference, 1919 Hussein was represented by Emir Feisal to put forth the case for the Arab State, inclusive of Syria and of Palestine. Weizman was a leading member of the Jewish delegation, arguing in favor of a British mandate for Palestine with the aim of assisting in the birth of a Jewish homeland. The Conference agreed to the British mandate, which was ratified by the League of Nations on July 24, 1922.

Meanwile, Feizal had been declared King of Syria on March 17, 1920 but by July 24 the French had claimed Syria and Feizal went into temporary exile in London. In August 1921 the British rewarded his war time services with the kingdom of Iraq. They also appointed his brother, Abdullah, King of Jordan. The British could claim to have kept their territorial promise, since the borders of the proposed Arab state had not been specified. Hussein had certainly believed that the state would be contiguous with the Hejaz. 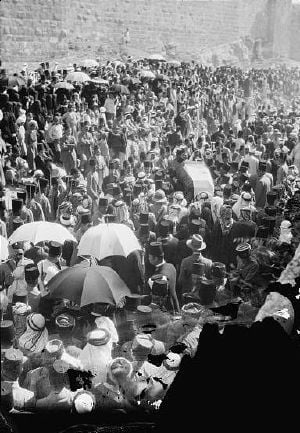 Hussein had already declared himself king of the Hejaz in 1917. He also declared himself king of all Arabs (malik bilad-al-Arab). This aggravated his conflict with Ibn Saud, with whom he had fought before WWI on the side of the Ottomans in 1910. Two days after the Turkish Caliphate was abolished by the Turkish Grand National Assembly on March 3, 1924, Hussein declared himself Caliph at his son Abdullah's winter camp in Shunah, Transjordan.[6] The claim to the title had a mixed reception, and he was soon ousted and driven out of Arabia by the Saudis, a rival clan that had no interest in the Caliphate. Saud defeated Hussein in 1924. Hussein continued to use the title of Caliph when living in Transjordan where his son was king after first fleeing to Cyprus.

The version of Islam patronized by the Saudi family, pioneered by Muhammad ibn Abd-al-Wahhab is somewhat different from the Hashemites's version. Many Muslims, however, believe that there is only one version of Islam. Sharif Hussein, always referred to as King Hussein, died in Jordan where he was given a state funeral.

Hussein's willingness to contemplate a common future for Jews and Muslims in the Middle East may have contributed to Jordan's peace treaty with Israel, becoming the second Arab and Muslim majority country to enter full diplomatic relations with Israel.

Hussein modernist approach, hinted at by Lawrence, may have contributed to efforts by members of the Jordanian royal family to promote inter-religious cooperation and peace-building and to promote an inclusive understanding of Islam. The Jordanian royal family stresses that Arab Christians and Muslims share a common culture and language and a concern for a secure and prosperous future.