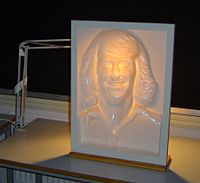 This face of Björn Borg appears convex, (pushed out) but is actually concave (pushed in).

The Hollow-Face illusion is an optical illusion in which the perception of a concave mask of a face appears as a normal convex face. This illusion reveals the significant role of prior experience, and thus hypotheses or expectations, in the perceptual process. Psychologists and other scientists have found the hollow face illusion a valuable tool to examine the relationships between perception and knowledge.

This particular illusion also has many applications in the world of art and illusory magic. The astonishing transformations that concave masks appear to go through when rotated (or the viewer moves) provide great fun and enjoyment. Such artworks reveal humankind's endless fascination with the creative and unusual. These instances can also help us realize that our own perceptions may be limited or different from those of another person viewing the same thing, but from a different angle.

The hollow face illusion was first brought to the public's attention by Richard Gregory, who published it in Illusion in Nature and Art in 1973.

The back of the paper dragon.

The hollow face illusion works best with monocular vision; filming with a camera or closing one eye to remove stereoscopic depth cues greatly enhances the illusion.

Another example of the Hollow-Face illusion is found in a popular folded paper cutout of a dog or dragon. This dragon's head seems to follow the viewer's eyes everywhere (even up or down), when lighting, perspective and/or stereoscopic cues are not strong enough to tell its face is actually hollow. Keen observers will note that the head doesn't actually follow them, but appears to turn twice as fast around its center than they do themselves.

Human beings have a great amount of bias towards seeing faces as convex. This bias is so strong that it counters competing monocular depth cues such as shading and shadows, as well as considerable stereoscopic depth cues. The effect of the hollow face illusion is the weakest when the face is viewed upside down, and strongest when in the most commonly viewed, right side up orientation.[1] Lighting a concave face from below to reverse the shading cues making them closer to those of a convex face lit from above can reinforce the illusion.

Nevertheless, as Gregory has noted, the illusion persists under less than optimal conditions, albeit less strongly, supporting his thesis that "top-down knowledge can dominate bottom-up signals."[2] In other words, that perception involves hypotheses, based on learning and past experience, which allow us to interpret what we see, and these hypotheses can overpower the actual sensory data that are being received, causing erroneous perceptions—illusions. 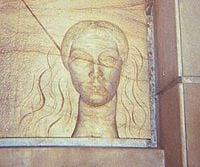 An example of a hollow-face illusion outside of a bank in Barcelona.

We show that prior knowledge about the general shape of faces can interact with the information the person acquires from vision at the time of the action. Without the knowledge that they are reaching to a face and what the typical shape of a face is, participants would perform the reaching movements differently. This stresses the importance of object recognition even for very simple motor tasks and shows that humans perform these actions in a more complex way than, for example, typical applications in robotics which do not take into account prior knowledge about objects.[3]

This particular illusion also has many applications in the world of art and illusory magic. The astonishing transformations that concave masks appear to go through when rotated (or the viewer moves) provide endless fascination and novelty to the curious.

Retrieved from https://www.newworldencyclopedia.org/p/index.php?title=Hollow-Face_illusion&oldid=1097768
Categories:
Hidden category:
This page was last edited on 25 January 2023, at 16:10.
Content is available under Creative Commons Attribution/Share-Alike License; additional terms may apply. See Terms of Use for details.