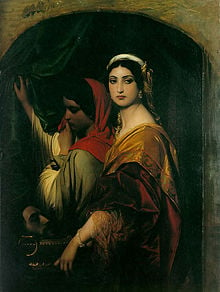 Herodias, also Herodiade (c. 15 B.C.E. – after 39 C.E.), was a Jewish princess of the Herodian Dynasty and queen of Galilee, best known for her portrayal in the New Testament as the wife of Herod Antipas who conspired in the death of John the Baptist.

The granddaughter of Herod the Great, Herodias was first married to her uncle Herod II, with whom she lived in Rome and Judea. While on a visit to Rome, her brother-in-law Antipas fell in love with her and proposed marriage, to which she assented. The couple then divorced their spouses and married each other.

The marriage also had important political advantages, as Antipas was the tetrarch of the Galilee, while Herod II had no position of rulership. Antipas, meanwhile, lacked the noble Hasmonean lineage which Herodias possessed. However, their union exacerbated tensions with Antipas' neighbor, King Aretas of Nabatea, who was the father of Antipas' first wife. It also provoked vocal criticism from the famed Jewish preacher John the Baptist, on grounds that the union violated Jewish law. John was consequently imprisoned and later beheaded at the behest of Herodias through the request of her daughter Salome.

When Caligula came to the imperial throne, Herodias urged Antipas to appeal to him for promotion to the title of king rather than tetrarch, an ambitious move which brought his downfall when her brother Agrippa I accused Antipas of treason. Although offered clemency if she separated from her husband, she followed Antipas into exile where she eventually died. 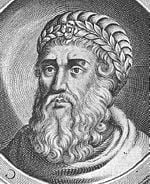 Herod the Great, Herodias' grandfather, left a legacy of intrigue among his many descendants.

Herodias was the daughter of Aristobulus IV, one of the two sons of Herod the Great by the Hasmonean princess Mariamne I. She thus lived through the trauma of having her grandmother, her father, and several uncles killed by her grandfather, who became infamous for doing away with any member of his family he suspected of representing a threat to his throne. Herod apparently retained some affection for Herodias herself, however. Her lineage on her mother's side, meanwhile, gave her important credentials as a member of the Hasmonean line, seen by many Jews as far more legitimate than Herod's own ancestry, since although he was a Jew by religion, he was an Idumean by ancestry.

Herodias' mother, Berenice, was also of royal blood, being herself the daughter of Herod's sister Salome I, and of Costabarus, the governor of Idumea. Herodias' siblings included Herod III, king of Chalkis; Herod Agrippa the future king of Judea; Aristobulus V; and Mariamne III, who may have been the first wife of her uncle, Herod Archelaus, briefly the ethnarch of Judea.

Around the year 1 or 2 C.E., Herodias married her uncle, Herod II, also called Herod Boethus, a son of Herod the Great and Mariamne II, the daughter of the high priest Simon Boethus. The Gospel of Mark calls Herod II "Philip," but this is probably an error, Philip being another son of Herod who was tetrarch of the territories east of the Sea of Galilee. Although seen for a while as the successor of Herod the Great, Herod II fell from grace after his mother was suspected of treason, and he was thus not included in Herod the Great's will as part of the plan to divide his kingdom among his other sons.

Herod II and Herodias nevertheless lived in luxury somewhere on the Mediterranean coast of the Levant as well as at Rome, where they enjoyed considerable influence. Herodias had a daughter, born around 14 C.E., whom she named Salome after her maternal grandmother. 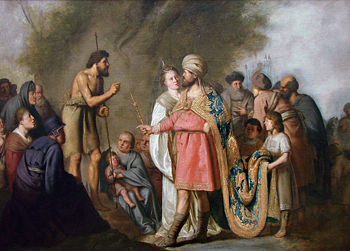 Herodias and Antipas hear the preaching of John the Baptist.

Around 23, Herodias divorced Herod II and married another uncle, Herod Antipas, tetrarch of Galilee and Peraea. It is traditionally believed that Herod Antipas and Herodias truly loved each other, but political considerations were no doubt important considerations as well. Herodias' Hasmonean descent was a vital asset for Antipas' ambition to rise to the position of king and unite his lands with those of Judea, which were now governed directly by the Romans after his brother Archelaeus proved incompetent. For Herodias, her marriage with Antipas improved her social status significantly and she was close to being a queen, a position she might have hoped for ever since her betrothal to her first husband when he was still the heir-apparent of Herod the Great.

Controversy and John the Baptist's death

For Hellenistic Jews the marriage may not have been extremely controversial. Indeed, there is reason to believe that some had great hopes in the restoration of a Jewish kingdom under Antipas and Herodias. The so-called "Herodians," referred to in the New Testament, may have been such a faction. However, the couple's union was not well received by some of Antipas' subjects, as it offended the religious sensibilities of strictly observant Jews. Antipas' and Herodias' marriage was interpreted by some to be a violation of Jewish marriage law, which commands: "if a man shall take his brother's wife, it is an unclean thing; he hath uncovered his brother's nakedness." (Leviticus 20:21) Although this was a case of half-brothers, Antipas was openly criticized by John the Baptist, who declared: "It is not lawful for you to have your brother's wife." (Mark 6:18) The criticism stung the couple enough that Antipas had the Baptist arrested.

In the Gospels of Mark and Matthew, Herodias plays a major role in John the Baptist's execution, using her daughter's dance before Antipas and his guests to ask for the head of the Baptist as a reward. Mark 6 contends that Antipas did not want to put John the Baptist to death, both fearing his popularity and respecting his holiness. It adds that he enjoyed the Baptist's preaching. Matthew's account follows Mark in placing the blame squarely on Herodias: 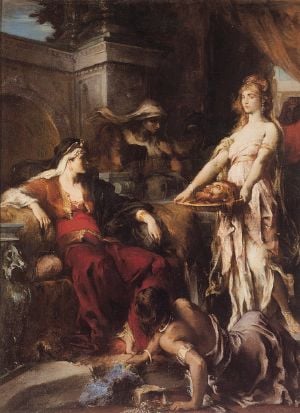 Herodias carries the plate with John the Baptist's head, while Salome dances on the floor.

On Herod (Antipas)' birthday the daughter of Herodias danced for them and pleased Herod so much that he promised with an oath to give her whatever she asked. Prompted by her mother, she said, "Give me here on a platter the head of John the Baptist." The king was distressed, but because of his oaths and his dinner guests, he ordered that her request be granted and had John beheaded in the prison. His head was brought in on a platter and given to the girl, who carried it to her mother. (Matt. 14:6-11)

In 37 C.E., with the accession of Caligula to the imperial throne, Herodias' brother Agrippa I was made king over the territories of the eastern territories of Batanaea and Trachonitis. Previously, Herodias had intervened with the emperor Tiberius on Agrippa's behalf and secured financial assistance for him from Antipas. However, he later quarreled with Antipas and parted from Herodias on less then friendly terms. Herodias now prodded Antipas to sail for Rome and ask the title of king from the the new emperor. They embarked for Italy in late 39. However, they were outsmarted by Agrippa, who had sent letters to Caligula denouncing Antipas' alliance with Parthia and alleging that he was stockpiling weapons for a rebellion. Caligula deposed Antipas and sentenced him to exile, probably in what is now Lyon (Gaul). The emperor offered Herodias the possibility to return in Judea to live at the court of her brother. She refused the offer and accompanied her husband in his banishment. She probably died in their exile shortly afterward. 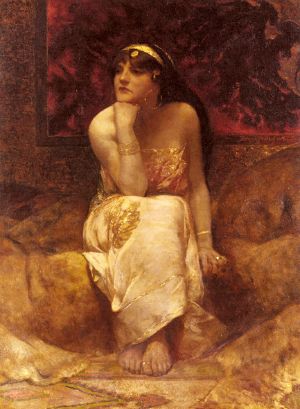 Herodias' bold move of divorcing her first husband in favor of Antipas has been the subject of much discussion, as has been her role in the killing of John the Baptist. Traditionally, she is portrayed as a latter-day Jezebel, using her influence in a bloodthirsty quest for revenge against the Baptist for daring to criticize her marriage in moral and religious terms.

Herodias and her daughter would become famous subjects in art, since their role as described in the Gospels provides dramatic opportunities to portray Salome's famous dance and Herodias with the severed head of the Baptist on a plate. Feminist scholarship questions this portrayal, seeing it as far more likely that, as the ancient Jewish historian Josephus suggests, the Baptist was simply put to death by Antipas for sedition. A critique of John the Baptist offered by the Reverend Sun Myung Moon suggests that John himself sinned more greatly than Herodias for using his ministry foolishly to attack the ruling couple rather than to actively support the Messianic role of Jesus.

In medieval Europe a widespread belief held Herodias to be the supernatural leader of a supposed cult of witches, synonymous with Diana, Holda, and Abundia. She has also been portrayed in numerous works of fiction and drama, such as: