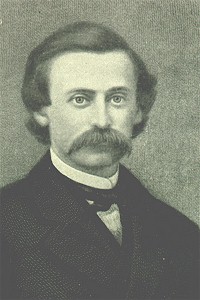 Henry Timrod, (December 8, 1828—October 7, 1867), was called The Poet Laureate of the Confederacy by famed Victorian era poet Alfred Lord Tennyson. Although he never achieved the international fame of his near-contemporaries Whitman and Longfellow, Timrod was the most renowned and well-known poet of the American South, and he is one of the most important regional poets of the nineteenth century, often compared to Sidney Lanier and John Greenleaf Whittier. Timrod wrote in the style of mid-nineteenth century Victorian verse, and although he is not considered a very innovative poet in his technique, he is unique among nineteenth-century American poets because of his position in American history. One of the few truly accomplished literary figures to write in the brief-lived Confederate States of America, Timrod provides historians and readers with an invaluable glimpse into the intellectual history and culture of the American South in the midst of the American Civil War. Although Timrod remains controversial, and justly so, for his ideological support of the Confederacy and slavery, he is one of the few writers of significant literary talent who can aid us to see the history of nineteenth-century America from a Southerner's perspective. This this perspective is not one that we can now endorse, it does show the cost of the epic struggle between good and evil that took place during the War Between the States.

In addition to the perspective Timrod offers to historians and those interested in the history of the United States, Timrod is also notable as a poet who, though not technically innovative, was nevertheless one of the most technically masterful poets of 19th-century America. The easy language of Timrod's lines and his thorough command of rhyme and meter have drawn comparisons with Wordsworth, Browning and Tennyson. Timrod may be a secondary figure in American poetry — overshadowed, as he was, by some of the most influential figures in the history of poetry — but he is nonetheless a major contributor to the history of America and American literature.

Timrod was born in Charleston, South Carolina to a family of German descent. His father was an officer in the Seminole Wars and a poet himself. Timrod studied at the University of Georgia, but, forced by illness to end his formal studies, returned to Charleston. He took a position with a lawyer and planned to begin a law practice.

From 1848 to 1853 he submitted a number of poems to The Southern Literary Messenger, under the pen name Aglaus, which attracted some attention to his abilities. Encouraged, he left the field of law for writing and tutoring.

In 1856, he accepted a post as a teacher at the plantation of Col. William Henry Cannon in the area that would later become Florence, South Carolina. The single room school building, still preserved in Timrod Park, located in Florence, was built to provide for the education of the plantation children. Among his students was the young lady who would later become his bride and the object of a number of his poems—the fair Saxon Katie Godwin.

While teaching and tutoring he continued also to publish his poems in literary magazines. In 1860, he published a small book, which, although a commercial failure, increased his fame. The best known poem from the book was A Vision of Poesy, written in direct imitation of the English Romantic lyrics that were rather popular in America at the time. In contrast to the rather complicated allusions and mythological references common of English lyrics, Timrod paints A Vision of Poesy in simple strokes, keeping his lines distinctly clean and simple. A short excerpt from the lengthy poem provides an example of this aspect of Timrod's style:

In a far country, and a distant age,
Ere sprites and fays had bade farewell to earth,
A boy was born of humble parentage;
The stars that shone upon his lonely birth
Did seem to promise sovereignty and fame—
Yet no tradition hath preserved his name.

'T is said that on the night when he was born,
A beauteous shape swept slowly through the room;
Its eyes broke on the infant like a morn,
And his cheek brightened like a rose in bloom;
But as it passed away there followed after
A sigh of pain, and sounds of elvish laughter.

And so his parents deemed him to be blest
Beyond the lot of mortals; they were poor
As the most timid bird that stored its nest
With the stray gleanings at their cottage-door:
Yet they contrived to rear their little dove,
And he repaid them with the tenderest love.

The child was very beautiful in sooth,
And as he waxed in years grew lovelier still;
On his fair brow the aureole of truth
Beamed, and the purest maidens, with a thrill,
Looked in his eyes, and from their heaven of blue
Saw thoughts like sinless Angels peering through.

With the outbreak of war, Henry returned to Charleston, soon publishing his best known poems, which drew many young men to enlist in the service of the Confederacy. His best known poems of the time are Ethnogenesis, A Call to Arms, Carolina, and Katie. He was a frequent contributor of poems to Russell's Magazine and to The Southern Literary Messenger.

Timrod soon followed those he had inspired into the military, but illness prevented much service, and he was sent home. After the bloody Battle of Shiloh, he tried again to live the camp life as a western war correspondent for the Charleston Mercury, but this too was short lived as he was not strong enough for the rugged task.

He returned from the front and settled in Columbia, South Carolina to become associate editor of the newspaper, The South Carolinian. In February 1864, he married his beloved Katie, and soon had a son, Willie, born on Christmas Eve. During the occupation by General Sherman's troops in February 1865, he was forced into hiding, and the newspaper office was destroyed.

The aftermath of war brought poverty to his family and to him, increasing illness. He took a post as correspondent for a new newspaper based in Charleston, The Carolinian, but after several months of work, he was never paid, and the paper folded. His son Willie soon died, and Henry joined him in death, of consumption in 1867.

Timrod's friend and fellow poet, Paul Hamilton Hayne, posthumously edited and published The Poems of Henry Timrod in 1873, with more of Timrod's more famous poems, including his Ode: Sung on the Occasion of Decorating the Graves of the Confederate Dead at Magnolia Cemetery, Charleston, S.C., 1867 and The Cotton Boll. The Ode, in particular, has gone down in history as one of the most memorable works of literature to emerge from the immediate aftermath of the War. Timrod's masterwork went as follows:

Sleep sweetly in your humble graves,

Sleep, martyrs of a fallen cause;

Though yet no marble column craves

The pilgrim here to pause

In seeds of laurel in the earth

The blossom of your fame is blown,

And somewhere, waiting for its birth,

The shaft is in the stone!

Which kept in trust your storied tombs,

Behold! your sisters bring their tears,

And these memorial blooms

Small tributes! but your shades will smile

More proudly on these wreaths to-day,

Than when some cannon-moulded pile

Shall overlook this bay.

Stoop, angels, hither from the skies!

There is no holier spot of ground

Than where defeated valour lies,

Later critics of Timrod's writings, including Edd Winfield Parks and Guy A. Cardwell, Jr. of the University of Georgia, Jay B. Hubbell of Vanderbilt University, and Christina Murphy, of the University of Connecticut, have indicated that Timrod was one of the most important regional poets of nineteenth-century America and one of the most important Southern poets. In his achievement, Timrod is often compared to Sidney Lanier and John Greenleaf Whittier as poets who achieved significant stature by combining lyricism with a poetic capacity for nationalism and political argument. All three poets also explored the heroic ode as a poetic form.

In 1901, a monument with a bronze bust of Timrod was dedicated in Charleston, South Carolina. But perhaps the greatest honor paid to him by his fellow patriots was in 1911, when the General Assembly passed a resolution instituting the verses of his poem, "Carolina," as the lyrics of the official state anthem.

Retrieved from https://www.newworldencyclopedia.org/p/index.php?title=Henry_Timrod&oldid=1097716
Categories:
Hidden category:
This page was last edited on 25 January 2023, at 15:41.
Content is available under Creative Commons Attribution/Share-Alike License; additional terms may apply. See Terms of Use for details.