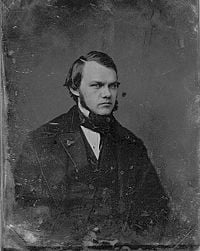 Henry Jarvis Raymond (January 24, 1820 – June 18, 1869), born near Lima, New York, graduated from the University of Vermont, and began his journalistic career by working for the legendary editor Horace Greeley. As well as having an extremely influential journalistic career, Raymond also had a passion for politics, and served as a New York State Assemblyman, Speaker of the Assembly, lieutenant-governor of New York, and a member of the House of Representatives. He was instrumental in the dissolution of the Whig Party and the subsequent establishment of the Republican Party.

Raymond is perhaps best known, however, for being the founder of the New York Times. His strong ethical stance ensured that the reporting was based on objective facts not emotion, rejecting sensationalism, and researching thoroughly, carefully, and intelligently. This brought a new era to the way news was reported, and quickly established the Times as the newspaper of record. Raymond's influence has remained in the paper through generations of editors and writers.

Henry Jarvis Raymond was born near the village of Lima in Livingston County, New York on January 24, 1820. He graduated from the University of Vermont in 1840, during which time he met his future wife, Juliette Weaver. They were married soon after Raymond's graduation, and had seven children together, only four of whom survived past childhood.

After college, Raymond moved to New York to pursue his journalistic career, where he remained throughout his journalistic and political career, until his death on June 18, 1869. There are several stories told about the cause of his death. One version states that Raymond died of a heart attack while in the apartment of his lover, actress Rose Eytinge. Another says that friends brought Raymond home from a party, mistaking the symptoms of a stroke for intoxication, where he died before morning.[1]

Raymond began his journalistic career after his college graduation by working as a staff journalist for Greeley's weekly publication The New Yorker. After writing for Greeley's New Yorker for a year or so, Raymond worked on another Greeley publication, a daily newspaper called the Tribune, where he worked as assistant editor. Later, he would gain further editorial experience by working on the old-fashioned and political Courier and Enquirer.

It was not until 1851 that Raymond and his friend George Jones were able to raise the money to make their dreams of their own newspaper become a reality. Even though previous editors had founded papers with little or no money, Raymond insisted on raising $100,000 (one hundred times what Greeley used to found the Tribune ten years earlier), which put the paper on a solid financial footing. On September 18, 1851, the first issue of the New York Daily Times, co-founded by Jones and Raymond, was published. Later renamed The New York Times in 1857, the newspaper was one of the first to give the news calmly and reliably. Most newspapers of the time were overly concerned with hyper-emotional writing, sensationalism, and extremist personalities, reading more like tabloids than respectable newspapers.[2]

Editorially, Raymond sought a compromise between Greeley's moralizing and the immoral sensationalism of other papers. In the first issue of the Times Raymond announced his purpose to write in temperate and measured language, and to control his emotions in his writing: "There are few things in this world which it is worth while to get angry about; and they are just the things anger will not improve."

He wanted the Times to be guided by a sense of social ethics, and took great care to make sure that foreign correspondents contributed world news thoroughly, carefully, and intelligently.[3]

As Raymond matured as a journalist, his political opinions diverged from Greeley's political philosophy. The split in their relationship intensified in 1849, when Raymond was elected to the state assembly. Raymond was a member of the New York Assembly in 1850 and 1851, and in the latter year was Speaker. In 1854, Raymond was elected lieutenant-governor of the state on the Whig ticket, a position that Greeley had coveted. This victory by Raymond led to the dissolution of the political alliance of Greeley, Thurlow Weed, and William H. Seward, and contributed to the demise of the Whig Party.

Raymond became actively involved with the formation of the new Republican Party, writing a statement of party principles called "Address to the People," which was presented at the 1856 Republican Party's convention in Pittsburgh. Raymond also served as president of the Republican National Committee from 1864-1866. In 1864, he helped to prepare most of President Abraham Lincoln's platform, and served in the House of Representatives from 1865-1867. Towards the end of his political career, Raymond attacked the Reconstruction theories of fellow Republican Thaddeus Stevens, who felt that states that had seceded should not be restored to their former status in the Union. Raymond expressed many of his views on the matter during his "Address and Declaration of Principles," presented at the 1866 Loyalist (or National Union) convention in Philadelphia. These actions caused him to lose favor with the Republican Party, and he was removed from the chairmanship of the Republican National Committee in 1866. Failing to be renominated by his party, he returned actively to journalism in 1867.

Raymond's political legacy is found in the pivotal role he played in the creation of the Republican Party, one of the most politically influential parties throughout American history.

Perhaps greater than his political legacy, however, is his journalistic legacy. In founding the The New York Times, Raymond helped to define a new type of journalism. Sometimes considered the father of modern journalism, Raymond helped to create a careful, reasoned, and accurate approach that became the standard for respectable news reporting. Eschewing sensationalism and over-emotional writing, Raymond set a standard that would influence a great number of future editors.

In addition to the his work with the New York Times, he wrote books including:

Retrieved from https://www.newworldencyclopedia.org/p/index.php?title=Henry_Jarvis_Raymond&oldid=1097709
Categories:
Hidden category:
This page was last edited on 25 January 2023, at 15:23.
Content is available under Creative Commons Attribution/Share-Alike License; additional terms may apply. See Terms of Use for details.