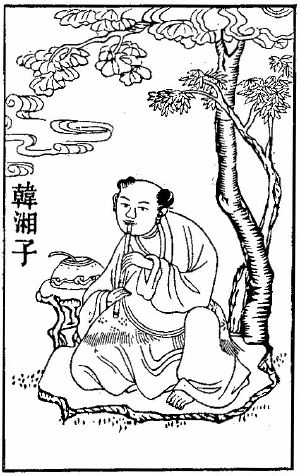 The Daoist Sage Han Xiang Zi is typically portrayed in Chinese iconography as a youth bearing (or playing) a flute.

Han Xiang Zi (韓湘子) ("Han Hsiang Tzu" in Wade-Giles) is one of the famous Eight Immortals figures in Daoism. He is generally thought to have been a historical person, born in the Tang dynasty (618-906 C.E.), and is likely a nephew of Han Yu (768-824 C.E.), a prominent Confucian statesman and a precursor to the Neo-Confucian revival.

In Chinese folklore, Han Xiang Zi is described as an austere seeker after metaphysical truth, utterly disinterested in politics and worldly affairs. He represents the prototypical Daoist disinclination towards social interaction and embodies the Daoist values of naturalness and spontaneity.

Han Xiang Zi is one of the illustrious Eight Immortals (Ba Xian), a group of Daoist/folk deities who play an important role in Chinese religion and culture. While they are famed for espousing and teaching Daoist philosophy and cultivation practices, they are also figures of popular myth and legend that are known for their devotion to the downtrodden and their collective lifestyle of “free and easy wandering.” Though they are most often depicted and described in the context of their group, each has their own particular set of tales, iconography, and areas of patronage.

Most tales concerning Han Xiang Zi describe him in the context of his politically savvy and philosophically minded uncle, Han Yu. Despite their constant association, accounts of the relationship between the two men differ substantially (in some cases, Han Yu was a teacher and friend to his nephew,[1] while in others he is depicted as a harsh critic of his nephew's religious efforts).[2] Regardless, the authors of these tales (perhaps with a "desire to keep on good terms with the Confucianists"[3]) use the contrast between the two men as an opportunity to explore the interests and comportment of an immortal.

In his youth, Han Xiang Zi is described as a child with an obstreperous disposition. Though he, like all well-to-do boys of the Tang, was educated in the rites and the five Confucian classics, he had no intention of entering government service. Instead, he simply desired to explore the surrounding mountains, play his flute, and commune with nature. When his pursuits were criticized by his uncle, he simply replied that, "You and I have different ideas of study."[4]

In his solitary wanderings, Han Xiang Zi encountered the famed immortal, Lu Dongbin, who became his mentor. During their time together, the boy attained Lu Dongbin's level of spiritual attainment for himself. However, the various accounts are inconsistent in their descriptions of his achievement. In some tales, he simply learns the techniques of magic and immortality from Lu.[5] In others, his enlightenment occurs when his patron takes him to visit the Queen Mother of the West's peach orchard (whose fruits yield eternal life). While there, disaster strikes the duo when the young Han Xiang, who had been playing in the branches of the peach tree, slipped and fell, seemingly to his demise. However, instead of snuffing out his young life, the fall somehow rendered him immortal.[6] After achieving this rarefied state, all accounts agree that he returned to mortal society.

Upon his return, Han Xiang Zi encountered his uncle, who again tried to convince him to abandon his trackless life. In response, the immortal stated: "Our paths are different. You are destined to be famous in the realm of mortals and I am meant to escape from the dust of this world."[7] When pressed on this, Han Xiang merely offered his uncle an oblique prophecy:

"Lost on the far Ch‘in Mountains, I cannot find my way;
Snowdrifts cover the Lan Pass and my horse can do no more,"[8]

telling him that its meaning would become obvious in time. Bidding his uncle adieu, the immortal then departed.

Soon after, Han Yu, who had recently spoken against the emperor's pro-Buddhist policies, was publicly critiqued, stripped of his previous rank, and re-assigned as the post-master of a distant rural outpost. As the statesmen trekked through the Ch'in mountains en route to this new posting, he was caught in a sudden blizzard, which caused his horse to falter. Near death and losing hope, he became aware of a figure approaching him through the the whirling winds. To his bafflement, the figure was none other than his nephew, Han Xiang Zi. Using his magical powers, Han cleared a path through the snow and led his uncle to the safety of a local inn. As the two sat down for a cup of warmed wine, the immortal reassured his uncle that his fortunes would be re-instated and that he simply needed to be patient. His superhuman nephew then reminded him about the prophecy, which had, of course, just been fulfilled. The next morning, after bidding a fond farewell to Han Yu, Han Xiang Zi vanished into the sky and returned to the company of the other Immortals.[9]

In this way, the legend (like many other Daoist parables) stresses that it is preferable, like Han Xiang Zi, to seek individual enlightenment instead of becoming entangled in worldly or political affairs. However, it should be noted that Han Yu's section of the tale also reaches a satisfactory conclusion, perhaps because his political involvement was anti-Buddhist (and thus implicitly pro-Daoist).[10]

Han Xiang Zi is typically represented as an attractive young man holding (or playing) a bamboo flute. An excellent overview of the immortal's prototypical physical appearance can be found in Yetts (1916):

Sometimes he is represented carrying a pair of long castanets, and sometimes a small furnace or crucible in token of his skill as an alchemist. Pictures often show him garbed in the leafy cap and deer-skin kilt worn by hsien; and generally near by is to be seen the peach-tree from which he fell and so ended his mortal existence. With obvious desire to keep on good terms with the Confucianists, Taoist writers and painters have made the most of his relationship with Han Yü, and it is not uncommon to find the famous scholar depicted in close proximity to The Eight Immortals, holding a scroll on which is written his protest against the extravagant honours paid to one of the Buddha's bones by the T‘ang Emperor Hsien Tsung.[11]

Because of his unearthly proficiency as a flautist, Han Xiang Zi came to be seen as "the patron of musicians."[12]